Friday night could be a very good night for the Butte High Bulldogs.

The Bulldogs could also wrap up a playoff spot as the they look to even their record at 3-3 after an 0-3 start. A Butte High win would secure the Bulldogs a berth in the Class AA playoffs. This year, the top six teams in each conference qualify for the postseason, and the teams will cross brackets in the first round. 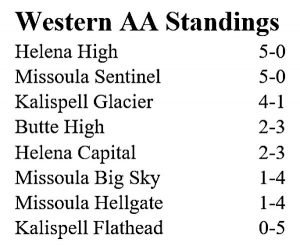 With losses to Missoula Sentinel, Helena High and Kalispell Glacier, the Bulldogs cannot finish higher than fourth place in the conference.

As usual, all of that means nothing to Butte High coach Arie Grey as his team gets ready to in Naranche Stadium for what is could possibly be the last time in 2020.

“It’s nice to be home. It’s nice to be in the confines of our stadium,” Grey said. “Even with the smaller crowds, we feel like we’ve got the best fans in the world. Our kids are excited.”

Grey has never been one to look ahead, and he bristles at the word “playoffs” until the team is actually in the playoffs. His long-held mantra is to get 1 percent better each day, and his Bulldogs have seemed to bought into that with consecutive road wins at Helena Capital and Kalispell Flathead.

Last week, the Bulldogs dominated Flathead on their way to a 42-13 at Legends Stadium.

Butte High put up 474 yards of total offense. That incudes 321 yards on the ground behind an offensive line made up of Zach Tierney, Aidan Lee, D.J. Jackson, Ty Raiha, Timmy Hollingsworth and Rylan Ruscheinsky.

Senior Christian Vetter ran 19 times for 161 yards and two touchdowns to lead the way. Butte High also got 91 yards from Gavin Vetter — all in the first half.

Maybe the biggest run of the game came on special teams, when junior punter/kicker Casey Kautzman saw that the Braves were paying him no mind. So, Kautzman took off for a 24-yard first down run that set up Butte High’s second touchdown.

“We’ve been playing a lot more physical,” Grey said. “We did a great job controlling both sides of the line of scrimmage. We’ve got to do that again Friday night.”

Senior quarterback Blake Drakos had another efficient game, passing for 153 yards and a touchdown. Cameron Gurnsey and Braydon Cetraro caught touchdown passes in the win.

Big Sky is coming off a tough 28-12 home loss to Capital.

Colter Janacaro, a senior with deep family ties to the Mining City, leads the Eagles into action. Last week, he passed for 106 yards while running another 27 times for 99 yards.

While he has been playing quarterback for coach Matt Johnson’s Eagles, the 6-foot, 205-pound Janacaro is listed as a running back on the Big Sky roster. He is also a leader on the defense at linebacker.

“He does a great job running the ball and spreading the ball to his receivers,” Grey said of Janacaro. “He’s got talented receivers.”

On the other side of the ball, Grey offered tremendous praise for the Eagles.

“They are one of the most physical teams that we will play all year,” Grey said. “I have so much respect for what Big Sky does. They play it physical and they play it fast.”

Playing more physical and faster has been something Grey and his staff have stressed as the Bulldogs turned their season around after the slow start.

Senior safety Tanner Huff is in the midst of a big season. He leads the Bulldogs with 49 total tackles. Tucker LeProwse, Ryan Neil, Riley Chiotti and Tierney all have registered more than 20 total tackles. Christian Vetter has 19.

Senior cornerback Christian Hansen has made a great case for an All-State nod as well. In addition to his 16 total tackles, Hansen has been credited with five pass defenses. He also scored on a 71-yard return after Olson, another Bulldog having an outstanding season on defense, blocked a punt at Capital.

Rylan Richards, the other starting corner has broken up a pair of passes, officially, and Lee leads the team with three and a half sacks. Olson is second with three, and Tierney, a sophomore, has two.

Butte High will honor the seniors and their parents in a ceremony before kickoff.

“It’s a great group of young men, our seniors,” Grey said. “They’re just fun to be around. They know how to laugh. They know how to work hard They’re good students. They really do a lot for a community. We’re just fortunate to have them.”

The Bulldogs close out the regular season next Friday at Missoula Hellgate.