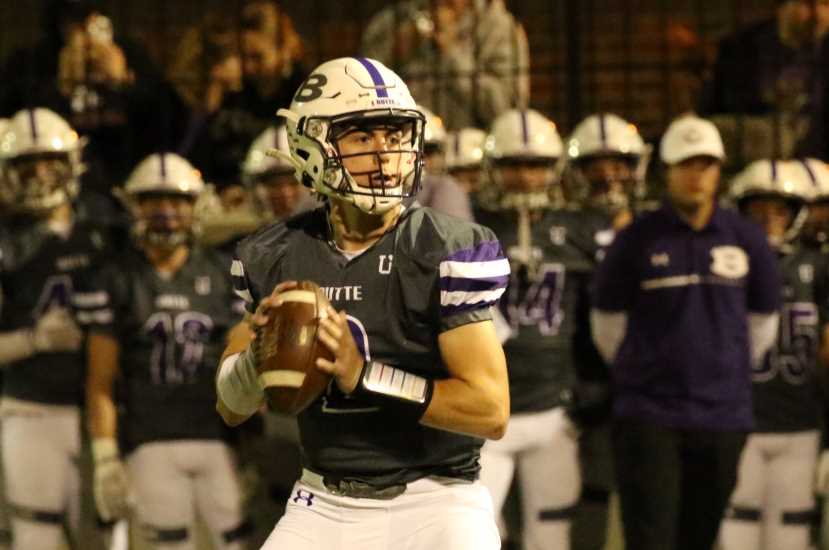 Friday night was already Homecoming and Silver B’s Night for Butte High School and its football team. The Bulldogs decided to throw Christmas into the mix, too.

Throw was the operative word. Senior quarterback Jace Stenson threw for five touchdowns and ran for another as the Bulldogs chewed up Missoula Big Sky 54-7 in a Western AA Conference game at Naranche Stadium.

Stenson played Santa Claus in the Christmas impression. He connected with seven different receivers while completing on 16 of 24 attempts for 299 yards, including the five touchdowns – two each to Sean Ossello and Cameron Gurnsey and one to Hudson Luedtke.

“I just know where they are and see who is out there,” he said about working in Butte High’s passing formations. “I try to get everybody the ball.”

So, when he’s looking over who is manning the receiver spots, Stenson is not necessarily looking for a favorite target so much as he is seeking somebody who hasn’t gotten the chance to catch one of his throws yet, he said.

Stenson also ran for a touchdown and Trey Hansen and Cale Johnson STATS each ran for one, and the Bulldogs didn’t even lead all the way. They spotted Big Sky the first touchdown.

“I’m proud of the kids,” Butte High head coach Arie Grey said. “We probably didn’t come out as well as we wanted to do. But it was good for us to have to respond to some of the things. We played hard and adjusted well after the first drive.

“We got a couple of turnovers.”

Big Sky cost itself, also, by having two touchdowns called back on penalties.

Each team punted away its first possession, and Butte High also had to boot when it couldn’t progress on its second series. Big Sky found its feet. Nifty, quick and speedy running back Joey Sanberg ignited the Eagles’ ground game with a 52-yard dash to the Bulldogs’ 10-yard line. Two plays later and after a 2-yard loss, Sanberg struck again, scoring from 12 yards away. Colten Ramos kicked the extra point and Big Sky owned a 7-0 lead with 5 minutes, 38 seconds left in the first quarter.

Butte High responded almost immediately. It took the Bulldogs five plays to find the end zone after the Eagles scored. Stenson’s 53-yard connection with Ossello, who sped down the sideline and maneuvered is way through blocking infrastructure set up for him to dart through the open field and slip over the goal line. The extra point kick missed, but the Bulldogs were on the board with 4:09 left in the opening period.

Sophomore Reece Johnson was an emergency starter at quarterback for Big Sky after injuries thinned the position. Blitzing Butte High linebacker Kyler Stenson (QB’s cousin) ended the Eagles’ next possession with a sack of Johnson in which the Bulldog stripped him of the ball for a fumble and recovered it for a sterling three-pronged defensive play. It set up the Bulldogs’ go-ahead touchdown, a 10-yard pass from Jace Stenson to Luedtke, a freshman receiver. Tyler Duffy kicked the extra point and Butte High had a 13-7 lead. The Bulldogs were ahead for good.

“After (the Eagles) scored, everybody started doing their jobs. I’m proud of how everyone played.”

Grey said the team concept kicked into the formula.

“There are some things we still have to shore up.”

The passing game was on display for the Bulldogs, though the running game shined, too. The number of receivers seems to be continually growing in this offense.

As well as Stenson manned the quarterback spot, he questioned some of his decisions – even in a 54-7 rout.

“Sometimes, I could’ve sat in the pocket longer and looked longer to pass,” he said, adding that he felt, maybe, he took on the run too soon because he thought he spotted an opportunity to do so for a big gain.

Butte High enjoyed a 34-7 margin at halftime as Stenson linked with UM Grizzlies commit Cameron Gurnsey on a 58-yard scoring strike, and Hansen crashed into the end zone from 4 yards out before halftime. The third quarter saw Stenson score on an 8-yard keeper and then hit Ossello again for a big play, a 33-yard TD pass.

So, the Bulldogs enjoyed a 47-7 spread through three quarters and methodically marched for a touchdown late in the game. Johnson did the honors on a 2-yard plunge.

Hansen wound up with 73 yards on 19 carries and Jace Stenson carried 10 times for 71 yards, including one jaunt on which he steamrolled a defensive back who could understandably be thinking he should have rethought the decision to stand in for the collision. Johnson helped keep possession late as Butte High ran out the clock.

Big Sky’s Sanberg was the leading ground-gainer for the game with 109 yards on 14 totes.

A large crowd was on hand as Butte High had the double celebration. Homecoming festivities were held with Max Gallicano and Hannah Haberman being crowned king and queen at halftime after Golden B’s, Silver B’s and even 91-year-old Diamond B Jack Saunders walked across the field pre-game to inspire the past. A new class in each is inducted every year, marking lettermen of 25, 50 and 75 years ago in football at Butte High. The honorary held a banquet and ceremony prior to going to the game.

The win lifted the Bulldogs’ records to 3-2 for the season and 1-1 in conference play. They will play at Helena Capital next Friday.