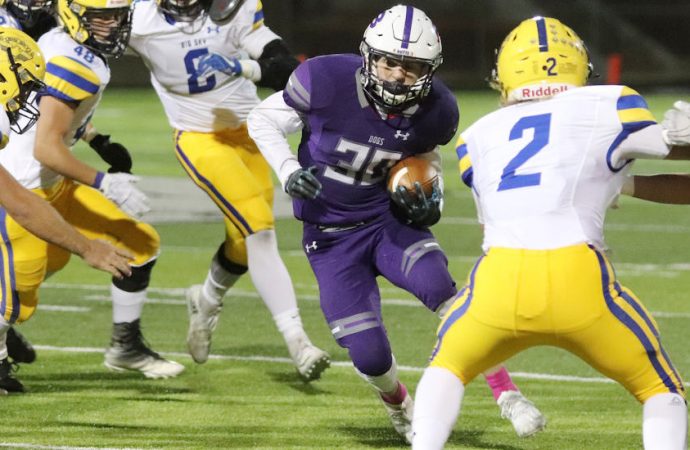 His coach said he should have just gone down to end the game.

But nobody could blame Christian Vetter when he did not. The Butte High senior was running to make up for too much lost time.

On fourth and 1 from the Missoula Big Sky 27, Vetter took the handoff and easily gained the first down that would have ended the game with Butte High beating the Eagles 45-33 at a rainy Naranche Stadium. (Stats)

Big Sky was out of timeouts and out of luck.

But instead of falling to the turf and letting the time run out, Vetter kept running all the way for a 27-yard touchdown that put the bow on a 51-33 Senior Night victory that secured the Bulldogs a berth in the Class AA playoffs.

“I should have went down,” Vetter said. “But there was no one around me, so I went in. The smart move would have been to go down. Coach (Arie) Grey said, ‘Hey, go down next time.’ But he didn’t chew me out for it.”

The crowd and the socially-distant Butte High student section went nuts as Vetter ran into the West end zone with just 3 seconds left on the clock.

That is because they knew what Vetter, one of Butte High’s 26 seniors, had gone through.

Vetter had to sit out all 12 of Butte High’s games last season because he tore an ACL before the first game. He also missed a big chunk of his junior season with a thumb injury after an outstanding start at outside linebacker.

“It was really tough,” Vetter said of watching from the sidelines as the Bulldogs advanced to the Class AA state championship game last fall.

Trying to fill the shoes of the great Kameron Moreno and splitting time with his younger brother Gavin, Christian Vetter ran for 138 yards over the Bulldogs’ first four games.

He racked up 333 yards over his last two games, including 172 yards on 31 Senior Night carries.

“You could tell from my stats the first couple of games that it was tough to get back into it,” Vetter said. “I’m feel like I’m getting back into the flow.”

Butte High’s Cameron Gurnsey heads into the end zone for his second TD of the night. (Bill Foley photo)

Vetter credited his fellow Bulldogs for his resurgence.

“All my teammates have been super good about it, and my offensive line has been doing a hell of a job,” he said. “I trust them with everything in the game.”

As great as his game was Friday, Vetter was truly part of an outstanding team effort by the Bulldogs.

“It’s always great to win on senior night, win in our stadium,” Grey said. “Now we’ve got to go and earn ourselves another game here.”

Butte High can secure the No. 4 seed from the Western AA with a win next week at Missoula Hellgate. That means Butte High would host a first-round playoff game.

“We’ll worry about that later,” Grey said, channeling his inner Bill Belichick. “We’re on to Hellgate.”

The Bulldogs never trailed, but Big Sky senior Colter Janacaro made sure that the Butte faithful were never really comfortable throughout the night.

Janacaro ran for 208 yards and three touchdowns. He also passed for 158 yards and two scores.

“You look at that Janacaro kid, and he’s a pretty good player,” Grey said.

The Bulldogs struck first. Cole Stewart recovered an onside kick at the Butte 44-yard line, and the Bulldogs marched 56 yards for the score on the first drive.

Drakos hit Gurnsey for an 11-yard touchdown to cap the drive.

The lead lasted for about a blink of an eye.

Janacaro faked a handoff and stood still while holding the ball. Then, he took off running for a 59-yard touchdown.

Casey Kautzman easily drilled a 43-yard field goal to give Butte the lead at 10-7, and Drakos hit Vetter with the dime to make it a 17-7 Butte lead.

That score came three plays after a sack, strip and fumble recovery by Lee gave the Bulldogs the ball back on the Big Sky 36-yard line.

Janacaro, though, answered again. One play after opening the drive with a perfect pass to teammate Louis Sanders for a 69-yard gain, Janacaro scored on a 3-yard run.

The Bulldogs blocked the extra point and held onto a 17-13 lead.

Gavin Vetter scored a 2-yard run to make it a 31-19 advantage, and the score held until halftime because Dylan Snyder and Tucker LeProwse sacked Janacaro to end a late Big Sky threat.

That was as close as the Eagles would come, though, as Drakos scrambled 8 yards for a touchdown before hitting Gurnsey for another 11-yard touchdown.

Big Sky threatened again, but Christian Hansen, possibly with some help from the rain, stripped the ball from Janacaro at the end of a 36-yard run, and Riley Chiotti recovered the ball at the Bulldog 10.

Butte High also forced a turnover on downs on the next Big Sky possession.

Four hand offs to Christian Vetter later, and the senior was heading for a heartwarming touchdown.

“That might have been my last touchdown in Naranche,” Vetter said.

“It was a good win against a really physical team,” Grey added. “We were able to run the ball effectively. Obviously up front they did a great job, and the Vetter brothers did a phenomenal job as well.”

Game balls could be handed out to so many Bulldogs

While the Bulldogs were far from perfect, the team can look to improve off a victory for the third straight week. Butte High is now 3-3 while Big Sky fell to 1-5.

“There’s a lot of things that we can look at that we can get better at,” Grey said. “The energy level was great. We played physical.”