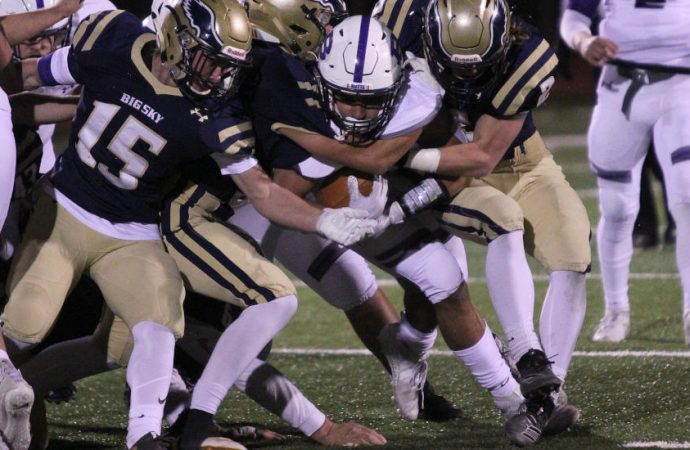 MISSOULA — It wasn’t anything fancy that sent the Butte High football team on its way to its eighth win of the season Friday night at Missoula County Stadium.

It was just a matter of the Bulldogs doing things the right way, something that could be a theme for the 8-0 campaign.

Tommy Mellott hit Banner Cetraro for a 64-yard touchdown pass to give the Bulldogs the lead for good, and Butte High went on to beat Missoula Big Sky 43-20. (Stats)

“The safety was saying ‘Watch the sticks,’ because it was like third and six or something, and they wanted to get off the field,” Mellott explained of his 20th touchdown pass of the season. “Their corner sat on an out. I just gave Banner a chance. He went and got it, and he outran everyone.”

Cetraro caught the ball about the 28-yard line and ran untouched for the score with just 56 seconds into the game.

“It wasn’t anything special,” Mellott said. “It was just a well-executed play.”

The play might not be special according to the humble quarterback, but the victory certainly is.

The win clinches the Western AA title for the Bulldogs (6-0) in conference. They have a one-game lead over Missoula Sentinel with one week to go in the regular season. Butte High holds the tiebreaker over Sentinel thanks to its last-second victory over the Spartans three weeks ago in Missoula.

“We’re happy where we’re at, but were not complacent at all,” Mellott said after wrapping up the conference crown. “We’ve still got a long way to go.” 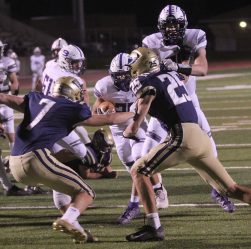 Butte High’s Kobe Moreno follows the block of Konor McClafferty for a touchdown run that was called back on a hold (not on McClafferty). (Bill Foley photo)

Butte receiver Tucker Winston is brought down by Big Sky’s Ben Maehl after picking up a first down. (Bill Foley photo) 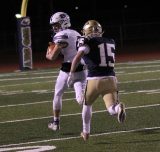 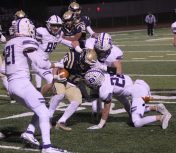 Mellott and fellow senior Kameron Moreno each scored a pair of touchdowns, running their total to 13 apiece on the season.

“It’s special seeing that kid run,” Mellott said of Moreno, who is just 63 yards shy of a 1,000-yard season. “He’s special. The time and effort he’s put into this game. The results he’s getting, he’s earned every single part of it. He’ll always give it to the offensive line, and I think our offensive line has been a huge part in it, but he’s done a lot of work.

“He finds a hole and he hits that thing. He’s a strong runner.”

The Bulldogs, though, answered with a three and out, and the Bulldogs struck again. Butte High marched 52 yards on 11 plays. Junior fullback Aidan Lee capped the drive with his first touchdown run of the season, a 4-yard pile-carrying run up the middle.

The 1-7 Eagles, though, did not get the memo that this was supposed to be a Bulldog cakewalk.

Big Sky shifted into the Wildcat offense with Colter Janacaro talking snaps, and the Eagles moved the ball.

Janacaro hit Ben Maehl for a 6-yard touchdown pass that capped a 12-play, 81-yard drive to cut the lead to 14-7 early in the second quarter.

The Bulldogs extended the lead to 17-7 when sophomore Casey Kautzman easily drilled a 33-yard field goal.

That came after a touchdown run by Kobe Moreno was called back by a holding penalty. It also came after Bulldog senior Mayce Grant recovered an onside kick to briefly slow Big Sky’s momentum.

Big Sky pulled to within 17-14 when Draven Lincoln hit Maehl for a 42-yard score.

Kameron Moreno scored from 2 yards out to make it 23-14. The extra point missed,, but the Bulldogs took the nine-point advantage into halftime.

The lead was 23-20 after Fred Everett scored on a 75-yard pass from Lincoln on Big Skys first possession of the half. McClafferty blocked the extra point.

The rest of the night belonged to the Bulldog offense.

Kameron Morreno capped an 11-yard drive with a 1-yard touchdown run. Mellott scored on runs of 2 and 3 yards, capping drives of 12 and seven plays.

Junior Tanner Huff picked off a pass to end Big Sky’s last drive. His long return was called back by penalties, something that plagued both teams.

Both sides had a touchdown called back, and the Bulldogs and Eagles combined for 24 penalties for 222 yards.

“Little things like that are things we’ve got to clean up, and I know we will,” Bulldog coach Arie Grey said. “The kids will come ready to work and ready to get better.”

Kobe Moreno ran for 32 yards, while fellow senior Josh Nelson added 31 for the Bulldogs, who racked up 303 yards on the ground.

“Hats off to our kids for finishing the game,” Grey said. “It was one of those games that probably went a little longer than it should have. But we were able to run the ball.”

Janacaro, who missed significant time this season with an injury, ran for 73 yards. Lincoln passed for 160, and Maehl caught five passes for 75 yards.

Mellott said the Bulldog seniors have been working for four years for this special Butte High season.

“Every single freshman team, after their season, says, ‘We’re going to be good when we’re older,’” the quarterback said. “We said it, and now we backed it up. We put the work in. We’ve worked for this the last four years.”

Butte High will honor its seniors and parents next Friday night when the look to complete the undefeated regular season. The game will not be the last time Butte High will play in Naranche Stadium this season.

After the bye, the Bulldogs will play on their home turf during the second round of the playoffs on Friday, Nov. 1.

“This is a special group. I love them dearly,” Grey said. “They do a lot of good things. They play hard, and they play emotional. I love that. It’s just a great group of kids that bought into trusting the process and doing what they’ve got to do day in and day out.”