Bulldogs force OT but come up a point short 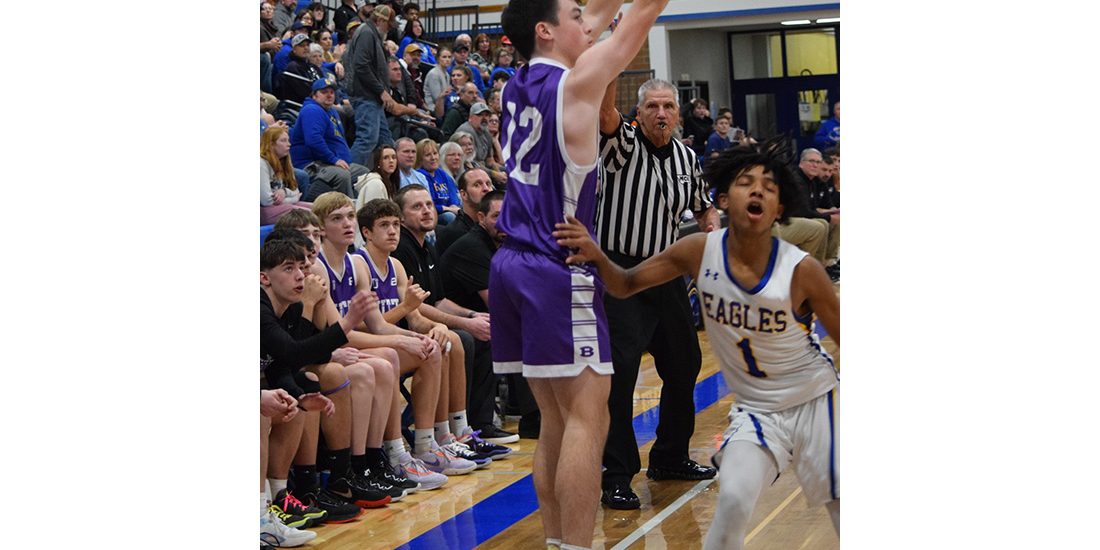 Tocher Lee knocks down a 3 ball to send the game to overtime Friday night in Missoula. (Photo by Kristina Mengon for Butte Sports)

By John Robbins via NFHS Network

In what was an absolute thriller of a game, the Butte High Bulldogs showed poise and determination, they were down by as many as 12 points with just over 2 minutes to go and they made an absolutely brilliant run to tie it in regulation and send it to overtime but couldn’t hang on late as the Eagles knocked down some clutch free throws.

The Eagles came out and opened up a 4-1 lead to start things off, Casey Merrifield would knock down 1 of 2 shots at the line and Cameron Gurnsey would get a rebound and a foul but couldn’t complete the three-point play.

The Eagles would get a bucket their next possession off a miss and a put back 7-3 Eagles, Hudson Luedtke would get fouled and knock down two at the stripe. Gurnsey would then get another board and put in a duce 12-7 Eagles.

The Eagles had their way down low driving and offensive rebounding for second chance points, Hudson Luedtke would come back and trade another bucket with the Eagles, but the Bulldogs just couldn’t contain the Eagles on the block early on, 16-13 3:11 left first quarter.

That would continue on the rest of the way through the first, the Eagles had an easy living down low in the opening quarter opening up a 25-13 lead with 1:32, Luedtke would knock down a 3 ball with 30 seconds remaining to make it 25-16 Eagles.

Big Sky would lead by nine heading into the 2nd quarter.

Two minutes into the second Jace Stenson got a steal at half court was fouled on the shot and made 1 of 2 at the line to make it 26-17 Big Sky.

Cameron Gurnsey would then get a steal of his own and head coast to coast for the and 1 bucket and miss the free throw, Big Sky drained a 3 next time down 29-19 Eagles.

Butte High would continue to cause turnovers and knock down big shots as Tocher Lee sunk a trey ball with 3:40 left 29-22 Eagles. Big Sky would knock down a big 3 with 2 minutes to go to bring the lead back to 9, 34-25 Eagles.

Butte would play a much cleaner second quarter and get a couple of buckets from Jace Stenson and a buzzer beater from senior Casey Merrifield off the glass and in 37-32 Big Sky at the half.

The Eagles would pick up right where the left off in the first half knocking down back-to-back 3 balls to push their lead to 43-35 after a Bulldog 3 of their own from Casey Merrifield.

Both teams were dropping treys like nervous cafeteria workers in the 3rd quarter as everyone got a little piece of the action on both teams, trading buckets left and right throughout the period.

Cameron Gurnsey was not quiet tonight as he would drill another Butte High triple to cut the lead to 43-38 with 6 minutes remaining, Jace Stenson would then knock down another 3 to cut it to just two.

Casey Merrifield drilled another Bulldog three after a pair of Gurnsey free throws 50-46 Eagles, 4:00 left in the 3rd.

It was a three-point borage at the end of the 3rd as well as both teams traded blows and Big Sky would lead 64-53 after 3 quarters of play.

Jace Stenson would then complete a 3-point play on the other end for the Dogs on their next possession.

The Dogs would use absolute hustle and will at the end of the period and cut the deficit to just 2 points with just 13 seconds to go. Big Sky would hit 1 from the stripe. After a tie up on the ground, Tocher “Big Shot” Lee would knock down an absolute clutch 3 off the inbound as time expired to tie the game and send it to overtime!

Jace Stenson would nail a triple in the overtime period to give the dogs their first lead 81-80, Hudson Luedtke would come right back with a 2 ball and make it 83-80 Dogs with 2 minutes to go in the extra period.

Hudson Luedtke would get the pass at the other end of the court race to the bucket and shoot a floater and miss the game winner, heartbreaker for the Bulldogs tonight. 88-87 final OT.

I texted coach on the road, and he had this to say after the game last night, “I’m proud of the boys for playing so hard and not giving up. I feel like we should have won that one, we made some great plays down the stretch, and they made their free throws late.”

The Bulldogs littered the score book tonight with big contributions from multiple players, I kept stats all game until the final two minutes when they pursued overtime, so the scores I have for the players are through 4 quarters, I didn’t track OT but as stats become available, I will update this story.

Hudson Luedtke had 20 points before the extra period began, Camerin Gurnsey had 17, Casey Merrifield had 15, Jace Stenson had 14, Tocher Lee had 12, all three balls including the buzzer beater to send it to OT, and Bo Demarais had 3, again these are not complete stats with overtime, but as stats roll in from Hudl I will update this story.

Butte High will play host to Missoula Sentinel next Friday.