Friday, Butte High will try to make sure the Bruins don’t do the same to their homecoming festivities when the teams meet at 7 p.m. at Naranche Stadium. (Radio: KBOW, 550 AM, 101.5 FM, kbow550.net or on the KBOW app.)

The Bulldogs are also looking for their fifth straight victory as the Bruins come to town for the key Western AA showdown. (Capital roster; Butte High roster)

Butte High enters at 3-0 in conference play and 4-1 overall. Capital is 2-1 and 3-2 after a closer-than-it-looks 21-7 loss at Kalipsell Glacier. A win would give the Bulldogs an inside track at hosting a first-round playoff game — at least.

While Butte High fans are certainly talking about the revenge factor and the playoff race, Grey said his Bulldogs are not.

“They’re focused on what we can do to get better,” Butte High coach Arie Grey said, giving this week’s version of “On to Cincinnati.” 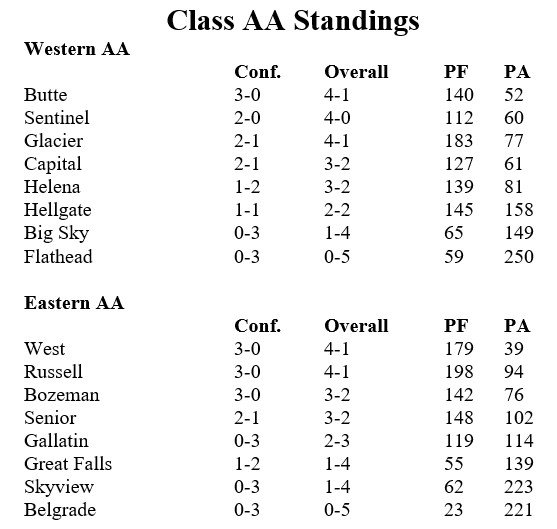 Grey said the Bulldogs, who are coming off last week’s 24-0 win at Missoula Big Sky, will have to play their best to beat the long-time Butte High nemesis.

The coach said the Bruins, who own a 21-8 advantage over Butte High in the rivalry that dates back to 1980, are better than their 3-2 record.

“I felt like they should have beat Glacier. They had the chances,” Grey said. “Four times they were in the red zone and don’t score.”

Senior Luke Sullivan and Dylan Graham give the Bruins a one-two punch at running back. That is assuming both will play. Graham missed last week with an injury.

“We’re assuming he’ll be back,” Grey said of of Graham

Junior quarterback Joey Michelotti leads the Bruin offense. He has completed 56 percent of his passes. He’s thrown for three touchdowns and three interceptions.

“Offensively, they’ve got some weapons,” Grey said. “They’ve got a good quarterback.”

The Bulldogs only gave up one score in the last two weeks, and that came after a turnover very deep in Butte High territory in a 48-7 win at Kalispell Flathead.

The Bulldogs possess the best scoring defense in the Western AA. They have surrendered just 52 points through five games.

“What I really like about what we’ve doing defensively, is we’ve been great on turnover conversions,” Grey said. “When we turn the ball over offensively, our defense has done a good job getting stops. That’s huge.”

Stewart and safety Wiley Dallaserra have been playmakers in the Bulldog secondary all season. So have cornerbacks Kale McDonald and Holt Downey. Kenley Leary, a senior who started the season as a quarterback, has also been a factor as a nickelback and linebacker for the Bulldogs.

Grey pointed to a redzone stop for the Bulldogs last week when talking about his defense, which is run by longtime defensive coordinator Bryan Arntson.

“We play with a ton of energy on defense,” Grey said. “We play fast, and we play physical. It’s been fun to watch our defense the last five weeks.”

Quarterback Jace Stenson has two of the top targets in the state in Snyder and Cameron Gurnsey. Gurnsey leads all Montana prep players in receptions (40) and receiving yards (555) Snyder, who has 20 catches for 290 yards, is coming off his second game with more than 100 yards receiving.

Jonas Sherman, Cole Worley, Braydon Cetraro and Leary are also weapons for the Bulldogs in the passing game. Gavin Vetter, Hunter Hotalen, Leary and Stenson are all threats to run the ball for Butte.

Butte High’s linemen will face a tough test with the Bruins, who have 29 sacks on the season. Junior Talon Marsh leads the way with 10 sacks, while senior lineman Cole Soper has seven.

Despite the two losses, the Bruins have surrendered just 61 points in five games.

“Their front seven is really good. Their front four is really good. Their entire defense is just lights out,” Grey said. “They’re really a young team, and they’re just getting better every week. They’re good on all three phases of the game. They scored on a blocked field, they scored on a punt return, they’ve had some big kick returns, they’re sound in the kicking game. They’re just good.”

Of course, no team has a better weapon on special teams than Butte High senior Casey Kautzman, and that was before he booted a school record 51-yard field goal last week.

His kicks and punts have given the Bulldogs a field position advantage all season.

Kautzman is also one of five Bulldogs who are candidates for homecoming king. The others are Worley, Demarais, Vetter and Stewart.

“We get a little bit of a distraction,” Grey said of the homecoming festivities that have taken over the school all week. “And they get to be kids.”