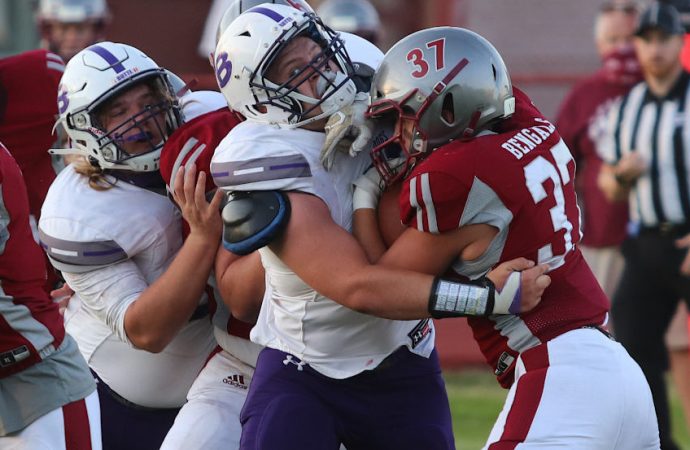 HELENA — The Butte High fans peaking through the bushes and over the fence saw the scoreboard at Vigilante Stadium show a five-point loss for the Butte High Bulldogs Friday night.

Helena High outslugged the Bulldogs for a 14-9 Western AA victory in front of a smattering of mask-wearing home fans scattered throughout the stands.

As he addressed his team following the loss, Arie Grey held up his index finger and thumb to tell the Bulldogs that the game was a lot closer than that.

“It’s a game of inches,” Grey said. “It’s a couple of opportunities here or there.”

Butte High can look at some of those missed opportunities that came in the form of the quarterback and receivers just missing each other for a few potential big plays. The Bulldogs can look at a couple missed tackles.

No matter how they look at it, however, the team boarded the bus and headed back to the Mining City at 0-1.

Still, Grey was more up beat than most coaches after a season-opening loss on the football field.

“We played our tails off all game long,” Butte’s 13-year head coach said. “Play after play, a lot of guys who were in the trenches that were going quite a bit kept sucking it up and kept going. I’m so proud of the kids and I’m so proud of the coaches because we did some really good things. It may not be what everybody thinks, but, hey, I know where we’re at.”

Bulldog fans made were noise even if they weren’t allowed in the stadium. (Bill Foley photo)

Bulldog Christain Vetter runs for a 17-yard touchdown as Helena’s Ben Swanson gives chase. The score was called back by a holding penalty. (Bill Foley photo)

While Butte High will bemoan their many missed opportunities, the game basically came down to two big plays.

One in the second quarter and one on the first play of the third quarter.

In the second quarter, Christian Vetter, who missed his entire junior season with an injury, broke a nice run around the left end for a 17-yard touchdown.

The play and Butte High’s celebration, though, was called back by a holding penalty.

Four plays later, Casey Kautzman booted a 31-yard field goal to give the Bulldogs a 3-0 lead.

Grey would not point any of the blame on the penalty after the game.

“We can control that,” the coach said. “What can we control? We came back on the next play, and then Casey hit a big kick, and we got points out of that drive.”

Chase McGurran caught a quick slant pass form Kaden Hout, bounced off a tackler and raced 75 yards to give the Bengals the lead for good. Raef Miller’s extra point made it 7-3.

Helena extended the lead to 14-3 with 9 minutes, 55 seconds left in the game when Marcus Evans barreled up the middle for a 4-yard touchdown run on third and 1.

The Bulldogs answered quickly to get back in the game, marching 55-yards on five plays.

Then, Drakos threw a perfect pass to senior Banner Cetraro for a 17-yard touchdown with 8:37 to play.

The Bulldog defense got the ball back for the offense three times over the last 8 minutes. All three times, though Helena’s defense stood up to the challenge.

Butte High’s final chance came when a deep pass by Drakos fell just beyond the dive of Cetraro on fourth and 10 at the Butte 20-yard line.

Helena got the ball back with 49 seconds left, and the Bulldogs, who were out of timeouts, could only watch as Huot took two knees to end the game

Despite being sacked four times, Hout had a big night in the victory. The junior quarterback completed 16 of 28 passes for 234 yards. He completed passes to six different receivers, and he ran for 45 yards on 18 carries.

He hooked up three times with Dexter Tedesco for 57 yards. He found Miller four times for 52 yards.

Ethan Maxness added 51 yards on the ground for the Bengals, whose defense sacked Drakos seven times.

Zachary Carson got in on a pair of sacks. Forrest Suero, Marcus Evans, Zachary Evans, Ben Swanson and Jack Marcille also got to the quarterback.

Drakos completed 13 of 28 passes for 128 yards in the loss. He used five different receivers

Cetraro and Olson each grabbed four receptions, Cetraro for 47 yards and Olson for 42. Cameron Gurnsey and Dylan Snyder each caught two passes, while Cole Worley snagged one.

Brothers Christian and Gavin Vetter combined for 73 yards on the ground. That would have been closer to 100 if Christian Vetter’s TD run wasn’t turned into a loss by the penalty.

Grey said his offense needs work, and that he is confident it will bounce back and be better next week when the Bulldogs play host to Kalispell Glacier.

“It’s just a couple things that were a little off,” Grey said. “Blake will come back strong and ready to go.”

The defense, though, had the coach smiling behind his mask.

“Our defense played lights out tonight,” Grey said. “We played great, and we’re going to keep getting better.”

Vetter had a big game to lead that defense. He had a sack on one play and a pass break up on another. Riley Chiotti, Aidan Lee and Dominik Scown also picked up sacks for the Bulldogs

Grey figures that unit and the near misses will help the Bulldogs build going forward.

“It was great to be out here, as weird as it is,” Grey said, referring to the rules of the coronavirus pandemic. “We’ll get back to work and get better.”