Bulldog, Spartan showdown lived up to its billing 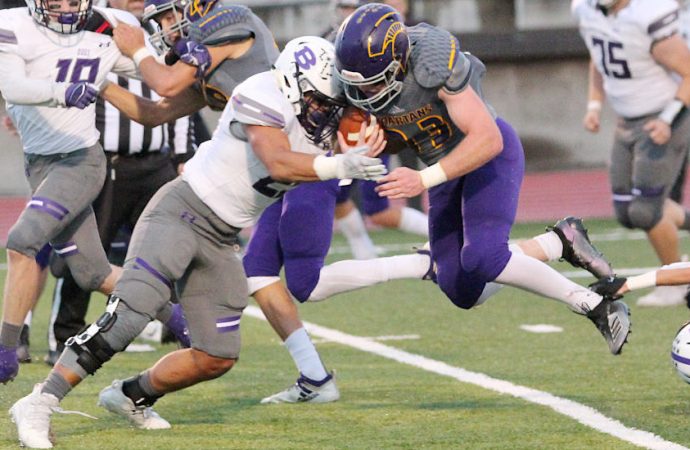 A rainy Thursday night at Missoula County Stadium set the scene for what was perhaps the game of the year in Montana Class AA football.

Relive the game at 7 p.m. Friday on KBOW. Paul Panisko and John Thatcher have the call in the game that came down to a last-second kick by Butte High sophomore Casey Kautzman. Listen at 550 AM, 101.5 FM or online at kbow550.net.

Led by transfer star Jaxon Lee, Sentinel entered the game with high hopes of winning the school’s first state championship since 1972. The Spartans were coming off a 28-14 win at Helena Capital.

Lee ran for 115 yards on 22 carries in the win over Capital. He rushed for 458 yards through Sentinel’s first four games.

Butte High was riding high after a 55-28 win at Kalispell Glacier six days earlier. The Bulldogs led the Class AA with 188 points through four games. Sentinel had surrendered just 60 points, an average of 15 per game.

The game lived up to its billing and then some.

The Spartans took a 29-22 lead into halftime after a back-and-forth first half.

The Bulldogs tied the game at 36 with 10 minutes, 18 seconds left when senior quarterback Tommy Mellott faked a handoff to Kameron Moreno, then hit the running back for a 29-yard touchdown down the left sideline.

Sentinel responded by putting together a drive to the Bulldog 15-yard line. On fourth down and 4, Bulldog Ryan Neil picked off a pass at the 1-yard line. He returned the kick 51 yards to the Sentinel 49.

“I went back in my back pedal, and he threw it over the top,” Neil said after the game. “He didn’t see me, and I stepped in front of it and took it.”

The Bulldogs had just recently started using Neil on defense.

“It was huge. Huge,” Grey said. “It was really Ryan’s first extensive action playing at corner, and he made a big play. You can tell he’s an offensive guy because he felt comfortable with the ball in his hands.”

Mellott and the Bulldogs took over with 5 minutes, 21 seconds left.

The Bulldogs ran 11 snaps, moving the ball to the 11-yard line to kill the clock. A holding penalty pushed Butte High back as the light rain started to pick up.

Kautzman, who was in the crowd at Naranche Stadium when Jake Dennehy booted a 46-yard filed goal to give the Bulldogs a last-second win over Bozeman in the 2012 state championship game, ran onto the field to attempt a 37-yard game-winning kick as time expired.

Kautzman toed the kick a bit, and the ball floated a bit right as it launched high into the rainy Missoula night.

If you cannot take the suspense, click here to read the Butte Sports game story from that battle of Class AA heavyweights.

Better yet, listen to Panisko and Thatcher make the call on KBOW.

The game is the first of a series of rebroadcasted games on Butte’s “Hometown Station” over the next three weeks. Butte High’s Nov. 8, 2019 playoff game against Kalispell Glacier will play on Saturday night.