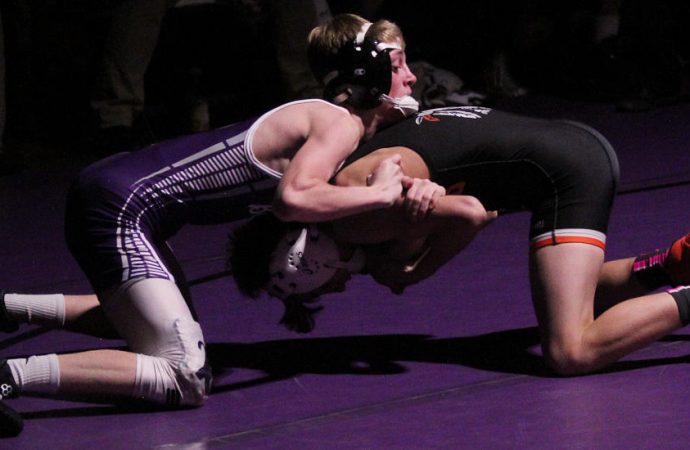 Butte High put a worry into Kalispell Flathead in one dual meet, then ignited a depth charge on Kalispell Glacier in the other.

The Bulldogs began their high school wrestling season Friday with a split of dual meets in the old Butte High gym. They lost by 39-33 to usual power Flathead and then romped to a 48-18 victory over Glacier. Both dual meets were Western AA Conference counters.

“It was a fun environment and everybody was excited,” Butte High head coach Cory Johnston said. “We had kids fighting to wrestle today, which was a nice change of pace.”

All three teams filled all 13 weight classes, and the Bulldogs even were able to change their lineup a bit from one meet to the next while experiencing good results at both ends of the double dual.

Butte High won six of the 13 bouts in the first dual meet, and 10 in the second.

“I don’t think we were out of shape,” Johnston said, responding to a query about some of the wrestlers not yet being in wrestling condition after an extended football season that took the Bulldogs deep into the postseason, the championship game. “We had to move some guys around a little bit to get the lineup filled in. Some of them will be at different weights than they were today. We were trying to give our kids the best chances available.”

Butte High started fast, coming out of an energetic entrance with music and lights into the old gym, being staked out by the Bulldog wrestlers as their return to home this season. Butte High wrestled in it before the newer gym opened in the early 1990s. The huge share of championships in a record 13-year Class AA state championship streak constructed by Bulldogs included victories on home mats in the old gym.

“How about that start?” Johnston asked, “That set the tone. Flathead is pretty high on its freshmen and they have some really good ones. The first three are some of those freshmen, but we had three good kids, too.”

However, Flathead recovered and ran off a string of victories to take a 33-24 command. Returning state place-winners Brendan Barnes and Fin Nadeau were among the winners in the string.

Kobe Moreno, wrestling for the first time since placing fourth at 170 in the 2018 state meet, took the mat in the 205-pound bout. He missed last season with an injury. Moreno built a 2-0 lead on Stewart with a first-period takedown, matched in the third period by Stewart. They each scored again in the last period, to send the bout into overtime. Kobe Moreno got the takedown with 46 seconds left in the extra frame. Stewart placed fifth at 160 pounds in the last state tournament.

Butte High’s other win in the dual was by senior Quinn Sullivan with a 5:17 pin at 160 pounds.

“We’ll wrestle them again and it’s going to be fun, again,” Johnston said. “Then, sometime in there, there’s going to be a tiebreaker.”

Some injuries in the Butte High camp had Johnston shuffling the lineup some. Scout Allen was held out of action after suffering an injury at Thursday’s practice, Johnston said. Both Sullivan and Kobe Moreno were hurt in bouts versus Glacier, but neither is expected to miss any time concerning coming bouts.

Butte High was dominant in the dual with the Wolfpack. Bulldog pins were registered by Keegan Gransbery at 120 pounds, Joe Sandoval at 145, Dylan Averyt at 160, Myles McClendon at 182 and Kameron Moreno at 205. Gavin Vetter notched a technical fall at 126 pounds and Anthony Liva posted a major decision at 152.

The other Butte High wins were decisions by Whitlock at 103, Conor Konda at 132 and Wiley Dallaserra at 138,

“Quinn and Kobe are going to be fine,” Johnston said. “We will be dealing with football injuries for awhile. I talked to both of them and the trainer and they think they’re going to be OK.”

Sullivan was leading his match 4-1 in the second period when it appeared he was shaken up on a takedown and wound up pinned by Kael Willis at 170 pounds. Kobe Moreno was taking on Glacier heavyweight Camryn Vergerous when coaches opted to have him forfeit after an injury scare.

The coach said he was “super happy” with the efforts and performances on the first day of competition. He said seeing so many Bulldogs get on the mats in varsity action was important.

“Every kid has a chance to make it to state,” he said. “It was good to get everybody out there under the spotlight. Some were nervous, even scared. But, when the whistle blew, they were ready to go.”

They’ll get another chance Saturday when Butte High travels to Helena to vie in the Capital City Duals competition, starting at 10 a.m. The Bulldogs are to go against Western AA Conference opponents Helena Capital, Helena High and Missoula Big Sky.

Next weekend will see Butte High play host to its Jim Street Classic Mining City Duals tournament, to be held this year in the Civic Center.