BILLINGS – The Bulldogs are off to a fast start.

Butte High overcame a few first-half mistakes and surged past Billings Skyview to post a 27-7 Class AA football victory over the Falcons Friday at Daylis Stadium in the season opener for both teams.

Junior running back Bo Mortensen carried the ball 24 times for 141 yards and a pair of touchdowns, while junior quarterback Ty Peterson completed 20 of 30 passes for 198 yards and no interceptions, including touchdown strikes to Kiley Caprara and Will O’Connor. Caprara led all receivers with 10 catches for 109 yards, including some nice circus catches in the first half. 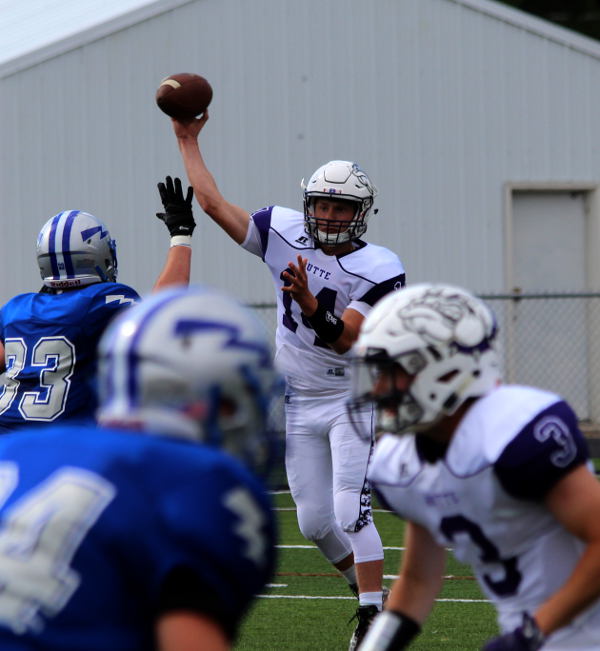 Butte High’s most noticeable performance, however, came from senior captain Brian LaFond, who registered three tackles for loss and four sacks in a shining defensive performance. The 6-foot-4 defensive end’s first big play of the day came when he chased down quarterback Dalton Macy in a race across the field that ended in a 5-yard Skyview deficit.

“I just stay out there and contain on run, and I go back and get ‘em on the pass,” LaFond said calmly. “It’s what we’re supposed to do.”

“Brian is a quiet kid, but he’s a great leader,” Grey said. “He has such an incredible motor and just a knack for finding the football. He’s been giving our offense fits at practice since he was a sophomore.” 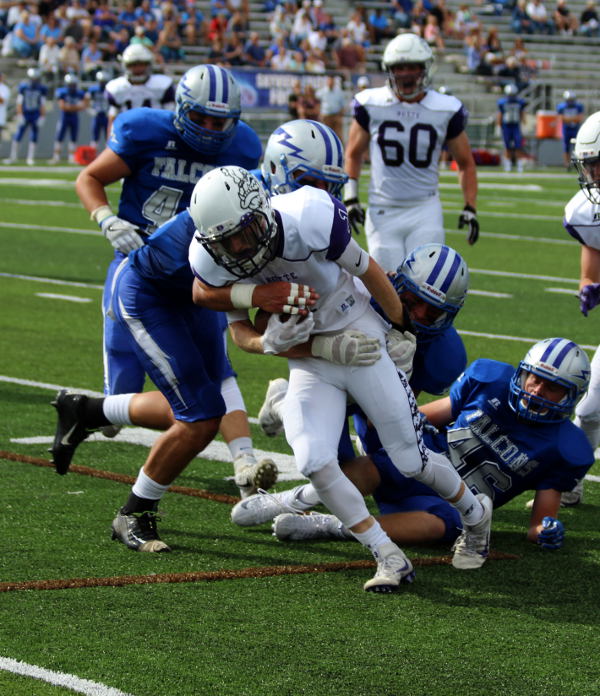 Kiley Caprara works hard for extra yards after one of his 10 catches Friday in Billings. (Pat Ryan photo)

Butte fumbled the ball to end its opening drive, but LaFond’s capture of Macy forced the first punt. The Bulldog offense went back to work and a couple of great catches and runs by Caprara and tight end Nathaniel Ferguson brought the team within striking distance. Mortensen plunged in from a yard out for the opening points, and Ferguson’s PAT boot gave Butte a 7-0 edge.

“Kiley really helped get us started,” Grey said. “He made some big plays early on.”

Skyview answered with a sustained 14-play drive, but came away empty handed after a 25-yard field goal attempt sailed wide left early in the second quarter.

Jacob Masters, Butte’s other senior defensive end, came up with a key interception that started a 47-yard drive that culminated in a 3-yard TD pass from Peterson to Caprara.

It was then that the teams traded the ball back and forth via fumble three times in six plays. Butte’s Austin Lee recovered the last one, though neither team was able to score again before intermission, which saw the scoreboard read 14-0 in Butte’s favor.

Drew Keierleber scored Skyview’s only touchdown of the day on a 2-yard blast to start the fourth quarter, but the Bulldog defense held the Falcons to a pair of punts and a turnover on downs for the remainder of the game.

“The defense as a whole, especially in the third period, played really well,” Grey observed. “We created turnovers in the red zone and they always handled what came at them and moved on to the next play. We’ll take that.”

Though Peterson lost the ball a couple of times, Grey was pleased with the composure he saw in the junior signal caller.

“Ty threw the ball well,” Grey said. “I can’t think of a bad decision I saw, and he kept his cool today.”

Butte rounded out the scoring in the final minutes, when Mortensen rumbled ahead for a big 37-yard gain, then punched it in from 12 yards out on the next.

The Bulldogs go back to work and begin preparing for Missoula Sentinel, whom the Bulldogs will meet next Friday evening at Missoula County Stadium, on the new artificial turf there.

“We’ll shore up some little things this week,” he said. “But we can’t be satisfied with where we are. We’ve still got a ways to go.”