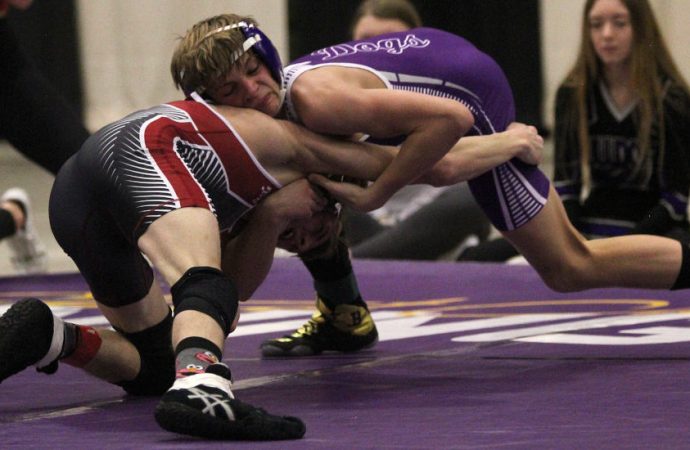 Even when he was in the seventh grade, Aaron Richards was a big man.

If he was blocking your way to first base, you would probably go around. Of course, you are not Christian Sherman.

Sherman, who was probably not even half the size of the soon-to-be Montana State offensive lineman back then, elected to barrel into Richards. In a David vs. Goliath moment on the baseball diamond, the big man hit the deck and the little guy was safe.

“I may have been crowding the base a little bit,” Richards, who recently graduated from Butte Central, remembered with a laugh Tuesday night. “He ran into me and I kind of fell over. He was safe because I dropped the ball.

“That’s when I learned I was not a baseball player.”

That is also when Sherman earned the nickname “Timex.” Like the watch, Sherman could always “take a licking and keep on ticking.”

Sherman, who stands about 5-foot-6 and weighs about 130 pounds (still less than half the size of the 6-4, 285-pound Richards), has never been very big in stature. He dreams however, are bigger than this world.

When it comes to his career plans, that statement can be taken quite literally.

On June 25, Sherman will begin basic training at the United States Air Force Academy north of Colorado Springs, Colorado. That is the first stop on a path Sherman hopes will lead to a career as an astronaut.

“I love space, first of all,” the now former Butte High wrestler, soccer player and track athlete said on the eve of his Wednesday high school graduation. “I feel like being an astronaut is one way you can truly explore something new. The entire Earth has been explored. If I go up into space, I go into the unknown. That’s something I really like about that.”

He is not talking about space in the science fiction sense, either.

“My dad really likes Star Trek, and I watched a little of it,” Sherman said. “I was never a Stark Trek geek or anything.”

Sherman, who is one of the 22 valedictorians of the Butte High Class of 2020, was too busy playing about every sport that he could.

U.S. Senator Jon Tester nominated Sherman for the Air Force Academy. Two of his high school coaches, Cory Johnston and Cody Carpenter, were among those who wrote letters of recommendation for his acceptance.

Carpenter, who took over the Butte High boys’ soccer program a year ago, also coached Sherman in youth soccer. He says Sherman’s smarts and worth ethic are off the charts.

“He was a joy to coach both when he was young and now when he was finishing up high school,” Carpenter said. “He is a hard worker, a good leader. I was bummed to only get to coach him the one year in high school. I would have liked to have him a few more years.”

Sherman, who lettered for the first time in track this spring, earned three varsity letters in both soccer and wrestling. He also went out for football at the end of his sophomore season because the junior varsity team needed a kicker.

He is planning on playing soccer at the Air Force Academy, either for the Falcons or on an intermural team.

“I definitely want to go into soccer. The Air Force Academy actually requires you to do a sport each semester,” Sherman said. “I’m going to try to do soccer. If I could get to intercollegiate, that would be pretty fun. But if I don’t make to the intercollege stage, I’m happy with intermurals.

“I’m not sure about wrestling yet.”

If you ask Sherman at the right time, he will tell you that wrestling is his favorite sport.

Whichever Sherman is doing, he is doing it a 100 percent, and then some.

“Sherm’s an animal,” Johnston, Butte High’s wrestling coach for the past five seasons, wrote in the letter to the Air Force. “If there is a racehorse named Sherman for sale, I’m buying it because it doesn’t matter what the score is, if Sherm’s on the mat, he’s in the match.”

When Butte High fans first got a look at Sherman in a wrestling singlet, he made 103-pound wrestlers look really big. That is because Sherman tipped the scales at a grand total of 84 pounds, meaning he was giving up nearly 20 points to opponents in wrestling’s smallest weight class.

By the time Sherman was a senior, he was a bona fide state title contender at 113 pounds, and he had to cut weight. He was ranked No. 5 at the weight in the Class AA coaches poll before his season ended with a broken elbow suffered Jan. 17 at the Jug Beck Rocky Mountain Classic in Missoula.

“I was looking for the top spot this year, I really was,” Sherman said. “I almost beat Vasquez. In the same tournament I broke my elbow, I should have beat him.”

Teegan Vasquez of Kalispell Glacier went on to win the state crown at 113 pounds a month later. In Missoula, Vasquez edged Sherman in a 5-4 decision that could be described as a big controversial.

Sherman calls it a “dumb call.” Johnston, being a little more diplomatic, said it was a “judgment call” that should not have been made in the final seconds of a match.

“It should have been an overtime match,” Sherman said.

When he went to the consolation bracket, Sherman busted his elbow.

Sherman was at his best when it should have been his low point.

The Bulldogs were battling for hardware in the tournament Sherman, who was injured on the first day of the two-day meet, asked to stick around Missoula to offers support for his teammates on Day 2.

“He said, ‘I could be in pain sitting on my butt at home or I could be in pain with my teammates,’” Johnston said. “He could have gone home and sobbed. Instead he stayed with his team. That’s the kind of kid he is. He’s one of the all-time best.”

Johnston also points to Sherman’s one-point loss to Butte High teammate Keagan Gransbery at the state meet the year before. It was an 8-7 match that Johnston described as a brawl, and Gransbery advanced to the 103-pound semifinals with the win.

“Christian was hurt in the inside, but he was happy for Keagan,” Johnston said. “The next morning, Keagan has a match, and who was there to warm him up but Christian. The whole team fed off him.”

Sherman ended up one win short of placing for the Bulldogs that weekend.

When his high school career ended because of the elbow injury, Sherman still was there for his teammates, rooting them on until the end.

It wasn’t easy, but he was there.

“Yeah, it was especially tough watching the medal rounds and the finals,” Sherman said of watching the state meet in Billings. “I seriously think I should have been on the floor during the finals.”

Since it was in Uptown Butte, it was not an easy course run.

“I said, ‘If you start outside the Naranche (Stadium) door, you start up hill and end up hill,’” Johnston remembered. “He said, ‘That’s all right. There’s hills no matter where you start.’”

Sherman then went out and murdered the course.

That came after a bunch of sit ups, pushups, pull ups and a whole lot more, too.

While he might have made it look otherwise, nothing about getting into the Air Force Academy is easy.

“No, it’s not. It’s very tough. I went through it myself,” Sherman said.

In addition to a 4.0 GPA and high test scores, Sherman wrote four essays for his application.

Once he qualified, the odds were still stacked against Sherman because only about 12 percent of the qualified applicants are accepted into the Academy.

In late April, Sherman learned he was accepted, and that he had very little time to decide if he would go forward with the appointment.

He was the Montana University System Honors Scholarship that would allow him to attend any Montana school on a full ride.

In the end, Sherman, the son of Cindy and Chris Sherman, chose the Air Force Academy over Montana Tech.

If he elects to pursue a degree in aerospace and mechanical engineering, which he is leaning toward doing, Sherman will be committed to five years of active duty and three years of non-active duty after he graduates.

If he elects to become a pilot, which is a possibility, that will require 10 years of active duty in the Air Force.

Either way, Sherman is going to shoot for the stars.

“I do want to be an astronaut in the end,” Sherman said. “That would be my dream career. That’s my top career goal.”

Sherman has had that goal since he was about 8 years old. That alone is pretty darn impressive, Johnston said.

“For a lot of kids, their goal is to get into the Air Force Academy,” Johnston said. “He knows what he wants to do when he gets there.”

First up, is basic training, which Sherman will complete while he is still rehabbing his surgically-repaired elbow.

“I’m going to have to put work into it,” Sherman said. “It’s not just going to come to me.”

Of course, anybody who saw Sherman run over Richards at first base knows not to bet against the Bulldog who is mall in stature but giant at heart.

“I just see him going to do great thing,” Carpenter said. “He’ll be successful in all that he does.”