Success on the soccer pitch Tuesday came down to three letters for the Butte High soccer team.

The Bulldogs had fun.

Trevyn Roth scored three goals and assisted on another to lead Butte High to 6-0 victory over Great Falls High at the Jeremy Bullock Complex.

Butte High’s girls’ team didn’t have as much fun in the second match of the day. Great Falls High scored its first two goals of the season in a 2-0 win over the Bulldogs. 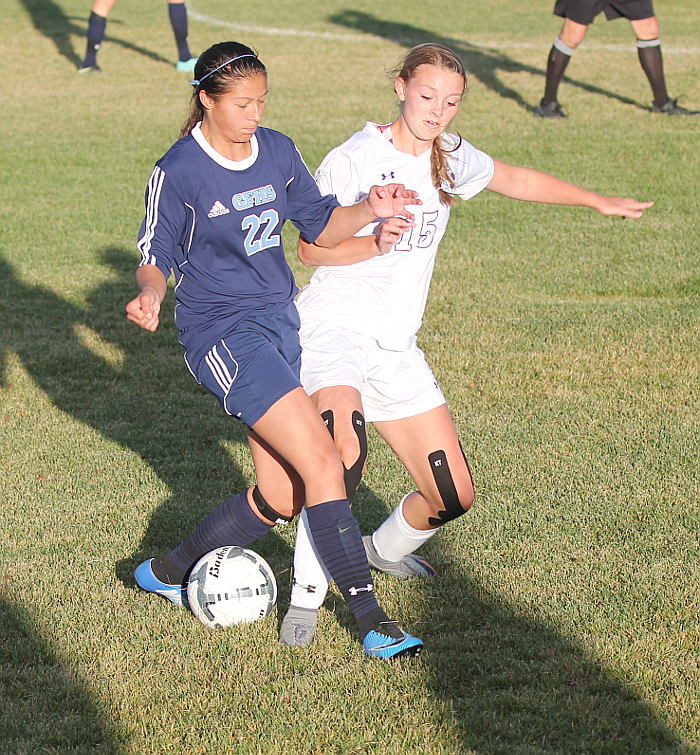 McNabb’s boys’ team had no such misfortune.

Roth put the Bulldogs up 14 minutes into the game when he scored off an assist by Justin McNabb. That opened the flood gates for Butte High, which posted its most lopsided win in recent memory.

Brandon Quinn scored off a Russell Park goal to make it 2-0, and Park found the back off the net off a Roth assist in the 33rd minute as Butte High took a 3-0 lead into halftime.

Just 2 minutes into the second half, the Bulldogs were on the board again. Nick Werkmeister made it 4-0 with an unassisted goal. Roth scored the next two goals off assists from Jackson Maloney and Shaun Villa.

Butte High outshot 18-2 in the first half and 25-5 overall as the Bulldogs controlled all but a couple of minutes in the second half.

“Trevyn Roth, Russell Park and Justin McNabb just completely dominated in the midfield,” coach McNabb said. “They were all over the state sheet.”

The win completed the season sweep of the Bison boys, and Roth and the 4-4 Bulldogs are already eyeing Thursday’s match at Great Falls Russell.

“We’re feeling it,” Roth said. “We’ve got to keep working and hopefully get back to that state tournament.”

His new team won, but it came against a team that he gave so much time to. Butte High beat Great Falls 1-0 earlier this month in Great Falls.

“It’s going to be easier in like three years when they’re all graduated,” Petritz said of facing the Bulldogs.

Macie McElhenney scored 18 minutes into the game. She jumped into the arms of teammate Halle Huber to celebrate the team’s first goal of the season.

Crisha Polk added a goal with about 2 minutes left as the Bison improved to 1-6.

Butte High went on the offensive, particularly in the second half. Butte High outshot the Bison 13-9, including 10-4 after the intermission.

The Bulldogs moved Ally Cleverly and Rylee Gonzales from the backline to try to generate some offense. It worked as Butte High did everything but get the ball past Great Falls keeper Jorgie Hawthorne.

“I told the girls that this was by far the best offensive game I’ve seen them play,” McNabb said. “We got up in the offense, we held the ball, we possess, and we had dangerous looks. That’s kind of been our goal for the whole season is just to create some offense.”

Freshman Brie Birkenbuel filled in for Payton Carver at goalkeeper, and the coach liked her play. Carver had to sit out after receiving a red card in Butte High’s match against Billings Senior on Saturday.

“We had one day to find a goal and give her practice,” McNabb said. “She probably saved some she shouldn’t have. That was pretty impressive for a freshman.”

Marti Ludwick, Kassidy Carlson, Justise Birkenbuel and Aspen Lovshin also stood out for the Bulldogs, who fell to 1-7.

“It was a win everywhere but the scoreboard,” McNabb said.