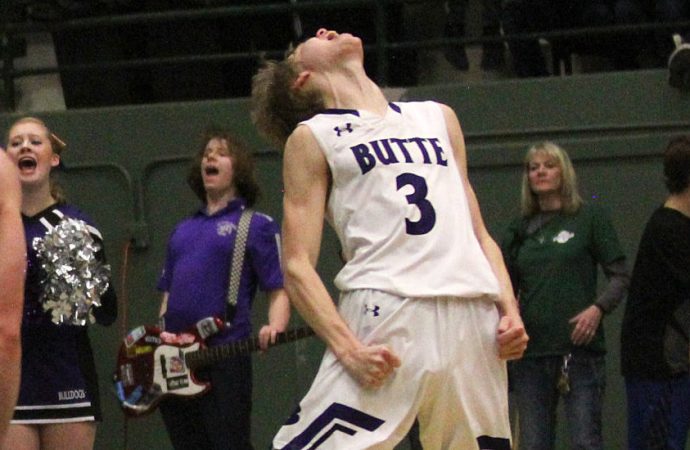 What will be the lasting image of Thursday night’s Butte High-Butte Central boys’ basketball game at the Butte Civic Center?

Will it be Butte High’s Clay Ferguson flexing and screaming at the ceiling after breaking a tie game with 2.8 seconds left?

Will it be Cade Holter shooshing the Butte High student section after hitting an improbable shot from behind the half-court line to send the game to overtime?

Will it be the Bulldogs posing for photos with their fans after what was by far the most exciting and intense game of the season?

Will it be the postgame somberness of the Maroons, who forced the extra 4 minutes after trailing by 15 points in the first half?

However you remember the latest chapter of Butte’s big game, it will be a memory that will likely last with you for a lifetime.

In a series full of classic games, Thursday’s very well could have been the best. It is at least in the conversation.

The Butte High Bulldogs left the storied arena with a 61-57 overtime win over the Butte Central Maroons in a contest that most of the 3,000 or so spectators could sum up with one word. Wow.

“This one is special,” said Ferguson, a Butte High senior. “The last rivalry game we get, and it was good that it was just exciting.” 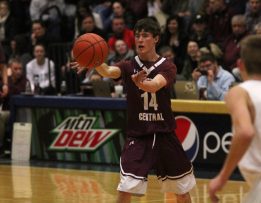 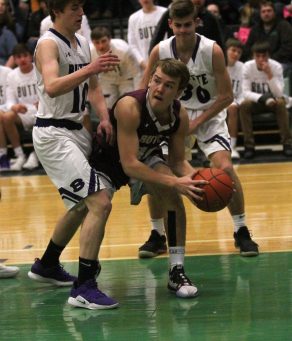 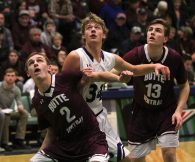 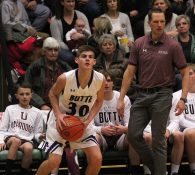 Bulldog Trevyn Roth spots up for a 3-pointer in front of the BC bench. (Bill Foley photo)

Cade Holter of BC and Danny McCloskey of Butte High hit the deck for a loose ball. (Bill Foley photo) 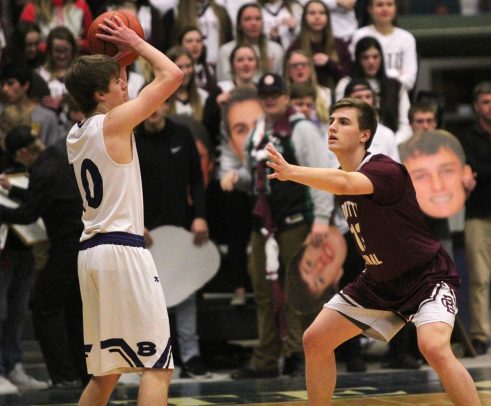 The extra stanza came after a few heart-stopping momentum swings at the end of regulation.

The Maroons tied the game at 48 — the game’s first tie — with an NBA 3-pointer by Luke Heaphy with 14 seconds left.

The Bulldogs countered when Kash Kelly hit Tommy Mellott, who hit Ferguson for bucket and a foul to make it 51-48 with 2.8 seconds left.

Cade Holter then pulled off the shot of a lifetime, hitting the more-than half-court prayer from near the sideline as the buzzer sounded. It was nothing but net, and the BC players and bench stormed the court.

“I died inside,” Ferguson said of Holter’s shot. “I thought it was over right there, and he’s the only person I know who can make that. That’s twice now. I think he made one two years ago. He’s insane. I love him.”

Holter said he told Butte Central coach Brodie Kelly that he wanted to take the shot.

“It felt good as soon as it left my hands,” he said.

“At the end of the day, we lost that game,” Holter said. “So that shot is meaningless.”

Count Butte High coach Luke Powers as one who begs to differ.

Powers said that Thursday’s battle will be a springboard for his Bulldogs, and Holter’s shot was a major part of that.

“Now, I mean hindsight’s obviously 20/20, I’m glad that he made it because we had to respond again,” Powers said. “We had to make free throws down the stretch. We had to attack. We had to take care of the ball against an incredible defensive basketball team.

“I think it will make us better down the stretch because that happened.”

Danny McCloskey, who lead Butte Central in scoring in last year’s Butte-Central game, hit a pair of free throws to open the overtime period and give the Bulldogs the lead. Sophomore post Jake Olson then sank a hook-shot to make it a 55-51 Bulldog advantage.

The cushion was enough for the Bulldogs to hold on for the win. But it never felt like it would end.

Maroon Dylan Sestrich hit a bucket before Butte High’s Tommy Mellott hit one of two free throws for a 59-54 lead with 42.1 seconds left.

BC junior post player Aaron Richards drew a foul on a 3-point shot with 17.5 seconds left, and he sank all three free throws. That cut the lead to 59-57.

Trevyn Roth, though, iced the win by hitting two free tosses with 14. Seconds on the clock.

“It was absolutely awesome, and hopefully it makes us both better in the long run,” Powers said. “I’ve very glad we came out on the positive end because we’re a little bit sick of moral victors, but an incredible basketball game. I think it’s sets us in the right direction.”

The win snapped a six-game losing streak for the Bulldogs (3-11), who have four conference games left before heading to the Eastern AA Divisional tournament in Great Falls.

Butte High is hoping the game puts an end to a streak filled with disappointment and sickness. Late Wednesday, Powers said some of his Bulldogs were so sick that he thought for sure Ferguson and Roth wouldn’t play. He thought Kelly was a question mark.

The players, though, knew otherwise.

The Maroons fell to 14-3 with their third loss in four games.

“We’re moving on,” BC coach Brodie Kelly said. “It’s important for us that we focus more about playing good basketball. I’m not concerned about losing to Butte High. I’m more concerned about the lack of concentration that we showed again on defense.”

Holter echoed his coach, downplaying the significance of losing to the rival Bulldogs.

“I don’t think it will sting for my whole life. I’m already over it,” Holter said. “There’s a lot more season left. There’s bigger things we can do.

“It’s not the old days. These are my friends.”

The Maroons definitely have bigger things ahead, like Saturday. BC will play host to Corvallis at the Maroon Activities Center. A Central win will give the Maroons a bye in next week’s district tournament.

“It’s a meaningful game for today, but the game that has the biggest impact on our season is Saturday,” Kelly said. “You have to keep it in perspective whether you win or lose it.”

Keeping things in perspective when it comes to the Bulldogs and Maroons, however, has never been a strong suit in the Mining City. Fans will be talking about this game for a long time.

The way it started, the talk was that of bewilderment.

Butte High came out fast, and turned up the heat on a BC team that had to be the favorite heading in.

After Holter scored on an inside hoop to start the game, Ferguson and Roth hit 3-pointers to give the Bulldogs the lead.

Butte High led 14-13 after Sestrich took a pass from Heaphy and sank a 3-pointer to open the second quarter. Butte High, though, scored 16 of the game’s next 18 points to take a 30-15 lead.

Central, which trailed 30-18 at the half, kept chipping and chipping away at the lead until Heaphy sank the 3-pointer.

Butte High’s apparent game-winning play at the end regulation was the result of learning from a past mistake.

“We were playing Billings Skyview and we ran that play,” Powers explained. “Kash kept the ball on the wing, and they trapped Kash. Clay was wide open, but we couldn’t get the pass to him. So the next day at practice we changed it, and we had Tommy pop. We hit him so it had an easier time getting in. Tommy threw a nice pass to Clay to set up Cade Holter.”

The Bulldogs got four points and some crucial rebounds down the stretch by the 6-foot-6 Olson. Kale McCarthy and Mellott each scored three. Jake Vetter also played for the Bulldogs.

All nine BC players who hit the court scored points. Gator Yelenich scored five, Heaphy and Tervor Neumann scored three, and Jared and Matt Simkins each tossed in two.

“There will be a lot of good that will come out of this,” Holter said. “We’ve lost three out of four. It’s a wakeup call, for sure. It’s time to get back on track.”

Ferguson said he thinks the win did just that for the Bulldogs.

“I feel like we needed this confidence boost,” he said. “I think everybody is kind of back to where they were. Kash is healthy, I think Trevyn is healthy, and I’m getting better.”

The game marked the 10th time the Bulldogs and Maroons needed overtime to decide the game. Four of those games went to double overtime, including Butte High win in 2010 and 2015.