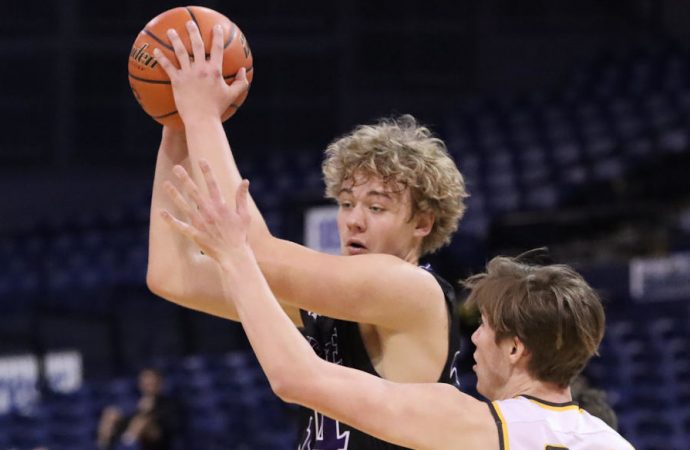 BOZEMAN — The boys’ basketball season ended in tears for a number of Butte High seniors Friday. Head coach Matt Luedtke and Bulldog fans were disappointed in the final game result, but certainly not in the season.

The Butte High season ended in a 61-41 loser-out round loss to Helena Capital at the state Class AA tournament in the Brick Breeden Fieldhouse on the Montana State University campus. (Stats)


“I’m so proud of these guys,” said Luedtke, completing his first year at the helm of the Bulldogs after enjoying state Class B championship success two times in a tenure at Choteau. “They fought and they fought. You know, Capital killed us both times (in the regular season) and this time, when we got to the third quarter, they weren’t very excited to be playing us.”

Such was the marked improvement in the Bulldogs, beginning to end. 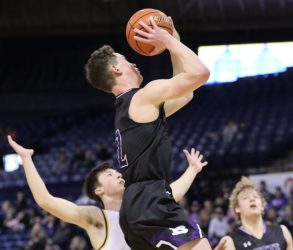 Bulldog Tommy Mellott goes up for a shot. (Photo by Carrie Casagranda Leary, for Butte Sports) 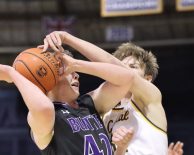 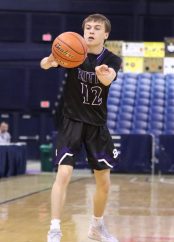 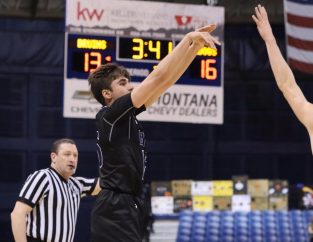 Butte High’s Andrew Booth gets off a shot. (Photo by Carrie Casagranda Leary, for Butte Sports)

They led 10-7 after one quarter against the Bruins as 6-foot-8 junior post Jake Olson worked the Bruins over on the inside and gathered in good passes from his teammates. The lead was 16-9 after an Olson follow with 5 minutes left in the half. Capital, though, began striking back. Shane Haller and Parker Johnston scored on back-to-back drives and then sophomore star Brayden Koch rained in a 3-pointer, and the score was tied.

Butte High led once more. Kaven Noctor broke the tie with a floater, then the Bruins rattled off seven straight points and held a 23-18 advantage at halftime.

Capital steadily pulled away in the third period.

“They sped it up a little bit,” Luedtke said. “We had opportunities, but couldn’t get the ball to go down for us.”

The Bruins were up by 10 points, 45-35, when the fourth quarter arrived. They outscored the Bulldogs 12-6 in the first 3 ½ minutes of the last stanza and were able to just maintain control the rest of the way. Butte High’s only response in the time frame were 3-pointers notched by Tommy Mellott and Cael Stenson. They were their team’s last points of the game. Capital finished with an 8-0 run on a Haller fast-break dunk, followed by a string of Bruin free throws.

“I’m proud of these kids and the character they showed,” Luedtke said. “They weren’t happy just to be here. So many good things did happen for us this season. I’m really proud of what they accomplished and am blessed to have been a part of it.”

“They were great kids all the way through the season. They kept getting better as players. By the end of the year, they were playing aggressively and were confidently.”

Butte High went 8-16 this season and qualified for its first state tournament since 2013. The Bulldogs placed fourth in the Western AA Divisional tournament, then lost games to well-touted Billings Skyview and Capital at the state tournament.

Capital improved to 17-6 with the win and will play a 10:30 a.m. Saturday loser-out game against the Missoula Hellgate-Billings West loser of their Friday night semifinal. Saturday morning game winners will play for third place Saturday evening.

“We’re losing good seniors, and we have good kids coming back,” Luedtke said. “We’re already looking forward to next year. We’ll see who wants to put in the work this summer. If the kids decide to commit, we’ll be back in the state tournament next year.”