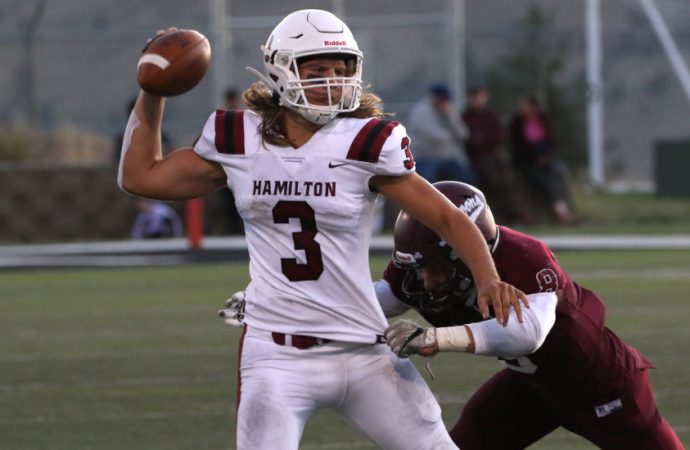 Both defenses seemed to be too solid to give up more than 1,000 yards in offense between them. Then again, it did seem the two offenses were sometimes on the field at the same time.

Part of the reason was in abilities of slinging quarterbacks Carson Rostad and Thomas McGree, who threw for more than 300 yards apiece in the Class A high school football opener.

However, the fight Butte Central put up might have been more than a lot of the fans from around the state would’ve predicted. The Broncs are the preseason No. 1-ranked team in the Treasure State Media Poll, and placed second in the last two state Class A playoffs. Montana Grizzly-bound Rostad was the state Gatorade Player of the Year last season and is a rare four-year starter at the quarterback position in Class A.

The 6-foot-3, 215-pounder showed his talents Friday night on the Bob Green Field at Montana Tech. He completed 28 of 42 passes with four touchdowns and no interceptions. Rostad flung TDs to four different receivers and also ran for a pair. His laser-like arm racked up 382 yards through the air and his legs churned for another 75 on the ground.

“Hamilton’s a good team and (Rostad) threw the ball well,” credited Don Peoples Jr., 31st-year head coach of Butte Central. “We had some opportunities we didn’t take advantage of, but our kids battled to the final buzzer. They gave a great effort.”

Eyston Lakkala of BC returns a kick. (Shelly Davis photo) 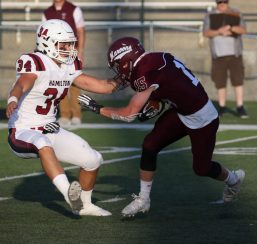 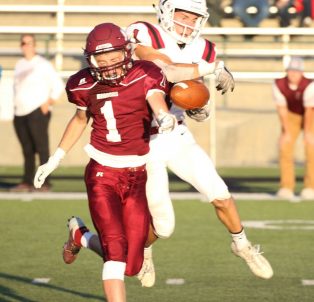 Guido Ossello lines up at receiver for BC. (Shelly Davis photo) 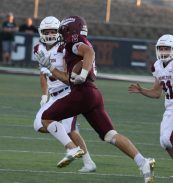 Braden Harrington picks up yardage for BC. (Shelly Davis photo)

McGree was no slouch at the Maroons’ offensive controls. He passed for 355 yards on 20 completions in 35 throws. The 6-1, 195-pound senior connected on three TD aerials, two going to Guido Ossello and one to Braden Harrington, fellow seniors.

Together, the offenses totaled 1,032 yards. The only turnover was a fumble Egan Lester recovered for Butte Central.

McGree has experience in a backup role at QB, but has been a varsity contributor at running back, receiver, linebacker and in the secondary in his years at BC.

He showed he was ready for the job by taking Butte Central on an 80-yard march on the first possession of the game. A 32-yard pass to Ossello, who wound up with seven snags for 154 yards, took the Maroons to the Hamilton 9-yard line. Two plays later, Lester crashed up the middle and into the end zone on a 4-yard carry. BC had a 7-0 lead after David Granell’s point-after kick.

“The first drive was almost perfect,” Peoples agreed. “We had a good offensive plan.”

Injuries started to bother the Maroons, and Jared Simkins left in the second quarter after having been Rostad’s biggest nemesis through most of the first half. Simkins sat under a blanket on the sidelines the rest of the game. Peoples said seriousness of the injury will be learned later.

Cramps and other physical troubles struck the Butte Central players through the rest of the game, limiting their abilities to play.

“Hamilton had kids playing both ways, too, so I’m not going to use that as an excuse,” Peoples said. “But, I do think it is really hard to get kids in cardio football shape in 14 days. We’ll be focusing on cardio next week.”

The Maroons forced a punt from the Broncs on Hamilton’s first possession, but were unable to capitalize on the next drive. Brock Jones broke through the BC offense to stop Lester for a four-yard loss and Butte Central was forced to punt from its own 24-yard line.

The play and the punt gave the Broncs the charge they sought. They launched a drive that tied the score at 7-all as Rostad completed three passes before scoring on a 2-yard keeper. His younger brother, Tyson Rostad, kicked the first of five point-afters.

The quarter ended in a 7-all tie before Hamilton took over the second period and went to the locker room with a 20-7 halftime advantage. Rostad aired TD tosses to Landon Duce and Missoula Loyola transfer Jaden Klemundt and the Bronc defense denied comparable response from Butte Central.

The Maroons looked fatigued leaving for the locker room. However, they appeared completely rejuvenated for the second-half kickoff and came back on Hamilton for a TD to get back into the game. McGree connected with Harrington on a 51-yarder that saw the BC receiver snare the throw coming across almost snatching the football out of the grips of a defender. The move allowed Harrington to elude the defender, speed downfield and angle into the end zone without being caught. Granell kicked the extra point and it was a 20-14 contest.

Hamilton responded, though, with a sustained drive and Rostad found Corvallis transfer Maison Murry on a speed route that went 48 yards and four a touchdown  to widen the gap to two touchdowns, again. The Broncs upped the pressure with a touchdown early in the fourth quarter, a fourth-down flip of two yards to Jones after the Butte Central defense had denied Duce the end zone on two straight carries.

The difference was then 35-14 with not quite 11 minutes left in the game.

“Our kids battled their butts off and played hard,” Peoples said. “They never gave up.”

McGree hit Ossello for a 20-yard scoring strike, but the Maroons couldn’t contain the Broncs. Hamilton answered with Duce tallying on a 4-yard tote to cap a drive that started with the Broncs recovering a BC onside kick at midfield.

The teams traded TDs once more. Butte Central elicited a roar from its supporters with a McGree-Ossello connection that measured 72 yards before the Broncs marched back downfield in the waning moments and Rostad darted untouched into the end zone from 20 yards away.

Each team seemed a constant threat to the other. Butte Central missed connection on a couple of long-pass links that might’ve gone for TDs, was unable to corral a Rostad fumble deep in Bronc territory and one or two interception chances weren’t realized. They weren’t necessarily mistakes, but signs of how much these Maroons were in this game with the preseason favorites to win the Class A crown.

Klemundt ended with 12 catches for 159 yards in fronting the Broncs’ air attack. Duce ran for 159 yards on a workhorse night of 30 carries as Hamilton controlled the ball with a margin in first downs of 30-15.

“We play in a heck of a conference,” Peoples said. “There are some really good teams. We have to remember the season is a marathon, not a sprint.”

“We’re not into moral victories, but I’m proud of the effort tonight and I think there’s a lot to build on from tonight.”

All games BC plays this season will be Western A Conference counters. Butte Central will take its first road trip of the fall next Friday with a game at Frenchtown, which outlasted Dillon 27-24 in double overtime in their opener Friday night. The Maroons will play at Dillon in two weeks before returning home for a game against Corvallis on September 20.