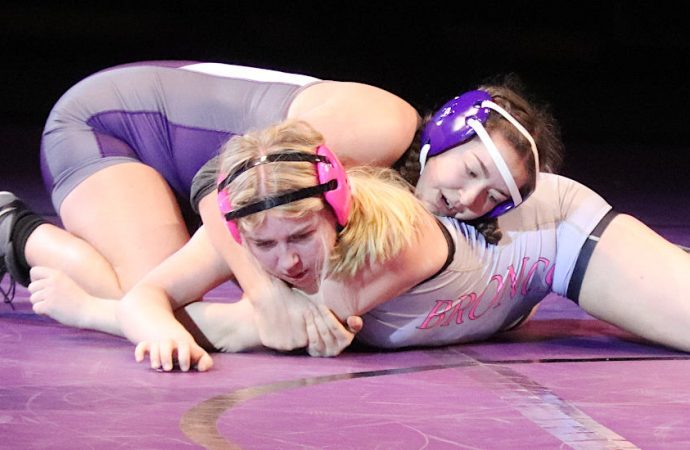 The action was fast. Blinks could cost a spectator seeing points.

Billings Senior edged Butte High 42-35 on Friday at the Butte Civic Center in what was, at least, the first high school girls’ wrestling dual meet for Butte High. Possibly, it was a first for the state of Montana.

“What we told (Butte High’s girls) is there would be another first dual meet for girls at Butte High,” Cory Johnston, head coach of the Bulldogs, said. “We told them to enjoy the moment and take it all in because they were making history.

“And, the girls were nervous. Boys are usually wrestling opponents they’ve seen their entire lives in (club) freestyle or Little Guy. Most of the girls have never gone against each other, or wrestled that often. In first matches, you’re always nervous.”

They were also appreciative. One of the Butte High girls even paused checking in at the match table to thank scorekeeper Lee Alt and timer Jason Alexander for being there so that she “could do this.” Butte teacher and former Bulldog wrestler and coach Ken Carver refereed the dual meet.

The bouts went back-and-forth with the Bulldogs shooting to an early lead on wins by Kaylee LaPier and Rilynn Mullaney. Senior rallied back with victories by Cheyenne D’Aigneau, Coral White, Paige Gershmel and Kendal Tucker. Butte High worked back out in front to a 29-24 edge as Hayla Hoffman scored a technical fall, Ashlee Wilcox won on forfeit and Mullaney nailed down her second pin off the meet. Chloe Rogers shook off a loss to Mullaney to tally a fall of her own on the back portion of the dual, sending the Broncs out ahead 30-29. Billings Senior’s Jersey Berg and Payton Kale won by falls the next two bouts before the meet finished with Kera Moreno notching a pin for the Bulldogs.

“We showed our lack of experience,” Johnston said. “And, the only way to get experience is, well, by getting experience. We need our girls to be wrestling as much as they can.”

Butte’s Ashlee Wilcox takes on Courtney Tougas of Senior in an exhibition match. Wilcox won by forfeit during the dual before taking on Tougas. (Bill Foley photo)

The plan will continue for the Bulldogs on Saturday when Butte High will enter a girls-only mixer in Kalispell, with girls representing all enrollment classes expected to compete the day’s rounds.

Even getting two teams together in Butte was a concession, Johnston noted. With schools trying to battle through the coronavirus pandemic and its various caused shutdowns, Class AA athletics had pretty much resigned themselves to compete only within their athletic conferences. The Butte coach said the idea of making an exception for a Butte High-Billings Senior dual meet was pitched, and worked out by activities directors Chuck Merriifield of Butte High and Mark Wahl of Billings schools.

“We’re glad Billings Senior has a lot of girls and that Class AA administration allowed this to happen,” Johnston said, noting that the Billings program’s roster of more than 20 girls let Butte High girls, in many cases, wrestle more than one bout, whether it be varsity or exhibition, in Friday’s meet.

It gave the Butte High team members a chance to rid their jitters.

“They’ve been practicing a long time,” Johnston said, “but no matter how long you do it, you can’t simulate a live match. As much as we wrestle in the wrestling room, you can’t simulate wrestling a person from another school under a light in a (darkened) gym. And, going through that the first time, can be exhausting.”

It was exciting, too — for the coaches and participants, as well as for the crowd, numbers for which were limited by the pandemic rules.

“The girls are getting better and better,” Johnston said, adding that workout partners LaPier and Mullaney are setting a positive tone for the team. “Rilynn is as good as advertised and Kaylee is coming out ready to go. She looked exceptional and last week (versus Kalispell Flathead) was her first match.”

Girls from Billings Skyview and Billings West bussed over with Billings Senior to compete in exhibition bouts.