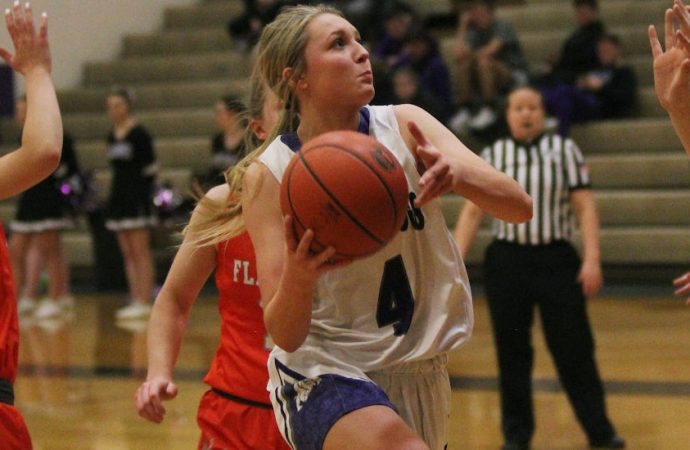 That was a bit of a shocking development considering the Bulldogs beat the Bravettes 67-39 four weeks earlier in Kalispell.

For Bulldog coach Maury Cook, the difference in the two meetings was easy to see. Her name is Jenna Johnson.

The Flathead senior guard hit six 3-pointers and scored 22 points to lead the Bravettes, who rushed to the center of the floor to celebrate following the win.

“Coach (Tricia) Dean did a great job scheming against our defense, and Jenna went off on us,” Cook said. “She didn’t get us last time, but she got us today. She shot the ball well.”

Johnson scored seven points when the teams played in Kalispell.

“We didn’t find her when we needed to, we helped off her when we weren’t supposed to,” Cook said. “We’ve just got to be mentally tough in these types of games.” 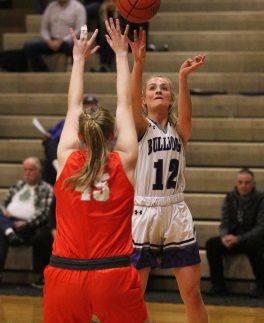 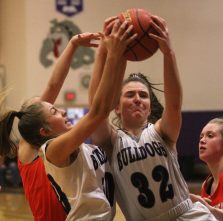 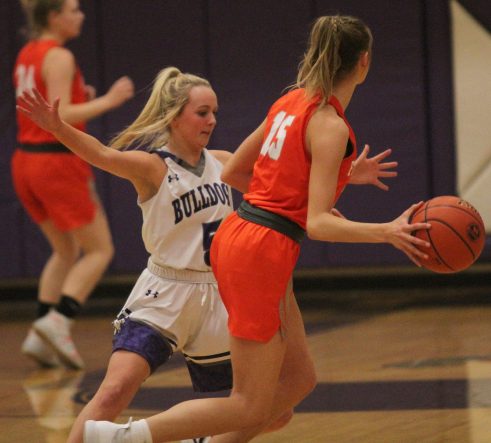 Flathead’s Maddy Moy missed the front end of a one and one with the Braves holding a 52-51 lead. However, teammate Kennedy Kanter ran down a loose-ball rebound and dished to Johnson.

Johnson launched a three from the corner, and her shot found nothing but net.

That trey turned out to be the dagger into the Bulldogs.

“That’s being mentally tough,” Cook said of Johnson. “That’s a player that shows mental toughness that can hit a shot like that at the end of the game.”

Cook also had no problem pinpointing the cause for his Bulldogs not playing up to their potential. The coach pointed to himself.

“We’re just undisciplined,” Cook said. “I told them, ‘That’s on me.’ I don’t know why we’re 14 games into the season and we’re so undisciplined. We gamble on defense. We don’t keep people in front of us.

“We have to find ways to get our practices as intense as these games,” the coach added. “That wasn’t a good performance. I told them that was on me. I didn’t have them mentally prepared for this game.”

Still, Butte High led for much of the game. A 13-2 run helped Butte High take an 18-11 edge after the first quarter.

The Bulldogs led 27-17 midway through the second quarter, but the Bravettes cut that lead to 32-27 at the half. The Bulldogs clung to a 39-37 lead after three quarters.

Johnson scored eight points in the final frame, including a 3-pointer that gave Kalispell a 46-45 lead with 4 minutes, 11 seconds left.

Senior Haley Herron sank a 3-pointer to pull Butte High to within 49-48 with 2:42 to play, and the Bravettes answered with a Bridge Crowley bucket and a Kanter free throw.

Things were then looking good when Moy’s free throw bounced off. Kanter and Johnson, however, said otherwise.

Crowley, who came off the bench, scored nine points in the win that lifted the Bravettes to 4-10 overall and 3-7 in conference. Moy and Akila Kubi each scored eight points for Flathead, which got four from Kanter, three from Clare Converse and two from Molly Winters.

Junior MacKenzie Tutty scored 10 of her 14 points in the first half to lead the Bulldogs, who fell to 7-8 and 4-7. Senior Makenna Carpenter scored 13 points, while Herron tossed in 10.

Butte High also got six points from Tylar Clary, three from Grace McGrath and Trisha Ericson, two from Kodie Hoagland and one from McCaul McCarthy.

Emmarie Richards and Ashley Olson also contributed for the Bulldogs, who will celebrate Senior Parents Day Saturday against Kalispell Glacier.

Cook said the quick turnaround will be a good thing for his Bulldogs, who want to quickly wipe Friday’s loss off the books.

“We told them, ‘Keep your head up,’” Cook said. “’You’ve got to play again tomorrow. You can’t hang your head. Get ready to play.’”