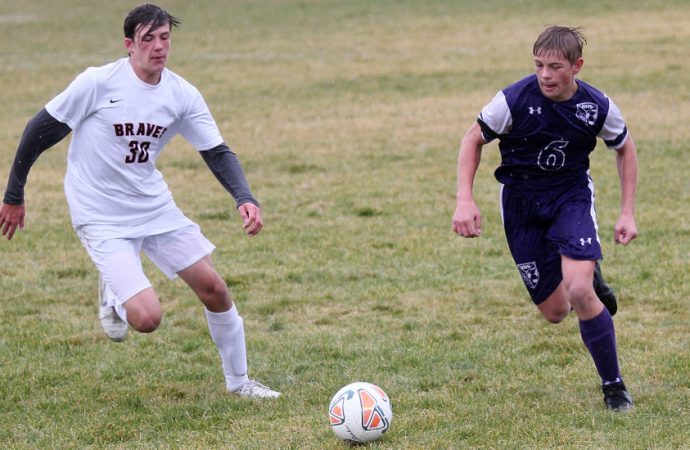 Friday’s Butte High boys’ soccer game must have held some sway. English weather was even imported for it.

Flathead High of Kalispell plowed out an 8-1 Western AA Conference win over Butte High at the Jeremy Bullock Memorial Soccer Fields in a match that started in rain, became dominated by snow, chilled by cold and bothered by wind.

“It was a cold one,” Butte High head coach Cody Carpenter remarked in agreement.

The Bulldogs were unable to overcome their cold start.

“”We kind of dug ourselves a hole with that start,” Carpenter said, alluding to the 3-0 lead Butte High allowed the Braves in the first seven minutes of the contest.

Jalen Hawes connected for Flathead in the first minute with a long shot from near the right sideline and 20 yards away. Two minutes later, A.J. Apple tallied on a breakaway and shortly thereafter, Apple repeated from in close. Apple went on to finish with a hat trick.

Jordan Zarich knocked in a shot through a pile and scramble before the Butte net with 11 minutes gone. Then, Hawes perfectly placed a kick into the back left corner and the Braves had a 5-0 command at intermission. Hawes also wound up the day with a hat trick.

The Bulldogs, though, had kept begun to brake the Braves’ stampede.

“In the second half, and eEen in the second half of the first half, I felt we controlled the midfields with our passing,” Carpenter said. “We had shots on goal. We had a header going and then the goalie made a great save on it.”

The header, almost a goal, was by Isen Padbury, who did score the Butte High one goal. It looped over Flathead’s back-line defense and goalie and into the net for the first tally of the second half.

The Braves, though, refused to give up anything else. Apple and Hawes each tallied in the first three minutes of the second half and then the game was scoreless for 33 minutes before Trevan Mcdowell of Flathead closed out the scoring.

Butte High just wasn’t able to fire its missiles in between the pipes.

“Colton (Case) and Corey (Ananzeh) had some shots,” Carpenter said. “We had a lot of shots on goal. (Goalkeeper) Logan Roepe had some great saves. He made two saves on penalty kicks.”

Flathead assigned its goalkeeper to attempt the penalty shots, leaving its own net empty. The Bulldogs were not able, however, to speed down the field fast enough to take advantage after the Roepe saves.

“These are though conditions and we had some bad bounces,” Carpenter said. “I feel we’re competing, but we’re having little mental lapses, mistakes that allow the opponents more goals than we have.

“I’m so proud of these boys. They’ve come so far since the beginning of the season.”

The Bulldogs will be on the field at the Bullock complex again Saturday for a 1 p.m. Western AA matchup with Glacier High of Kalispell.