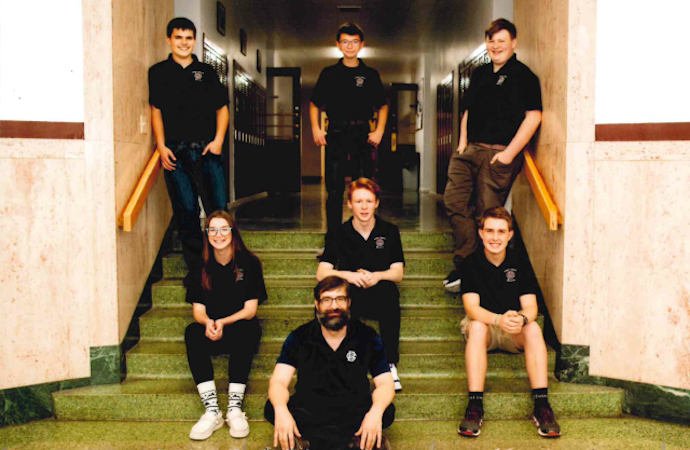 Over the past weekend, the Butte Central Talking Maroons joined 21 schools and 230 oratorical athletes from around the state in the first Montana All State Extravaganza virtual speech meet. The students competed over two days, performing their pieces via webcam.

BC freshman Jim Bradshaw led the debaters, notching a third-round win in Lincoln-Douglas debate, during which competitors debated the private exploration of space. Commenting on Bradshaw’s debate, one judge said, “It was simply easier to understand the (affirmative argument) both in terms of their arguments and their voice.”

Sophomore Hallie Kellicut, who has advanced to the finals round in each meet this year, continued her streak, placing sixth in Memorized Public Address. Kellicut continues to perfect her piece, a recitation of “One Today” a piece originally presented by Richard Blanco at President Obama’s second inauguration. Judges noted Kellicut’s “lovely, clear diction. Excellent voice control and volume.”

Impromptu speaking is perhaps one of the most difficult events to hold over the internet. Speakers are given a short quote or cartoon to evaluate in three minutes, they are then given 3-5 minutes to present their speech. Due to the nature of the competition, when speaking, only the judge and the speaker are in the “room,” rather than performing in front of their fellow competitors.  Speakers are evaluated on structure and effectiveness of argument, analysis of the prompt, and presentation. Junior Ethan Andersh, and Freshmen Michael Peck and William Mcanulty continue to hone their skills. Andersh tallied the best round of the team, taking the second place in the first round.

The Maroons have one more meet before the postseason. They will compete at the Richest Hill on Earth meet, which is hosted by Butte High School this Friday and Saturday. The Western A Divisional tournament will be held on Jan. 22 in Frenchtown. The State tournament follows Jan. 28-29 in Corvallis.