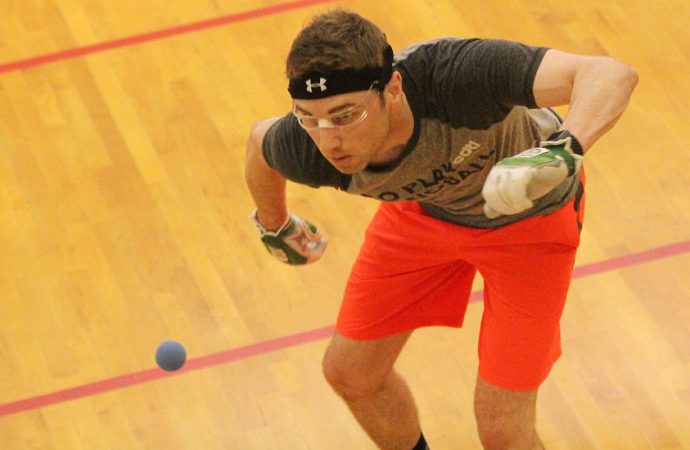 Scottie Moler of Bozeman eyes the ball during his win over Butte's Brett Badovinac in the championship match of the Open Division Sunday at the Elks. (Bill Foley photo)

Montana has a new state handball champion, and this one looks to have some staying power.

Scottie Moler of Bozeman used his powerful serve to knock off defending champion Brett Badovinac 21-9, 21-2 in the Open Division championship match Sunday at the Butte Elks.

The 33-year-old Moler moved to Bozeman from Iowa to the Treasure State in June. He didn’t lose a game in his four wins on his way to the state title.

A year ago, Badovinac became the first Butte player to win an Open state title since the great Bill Peoples in 1999. Badovinac, 45, captured the Masters (40-plus) tile because he was the highest masters-eligible finisher.

The Masters and the Open divisions were combined this year. 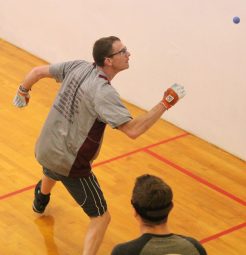 Butte’s Brett Badovinac goes for a kill off the back wall in his Open Division championship match against Bozeman’s Scottie Moler. (Bill Foley photo)

Rick Edwards of Livingston looks to dig the ball out of the corner in his Golden Masters win over Butte’s Mike Hitchcock. (Bill Foley photo)

Scottie Moler of Bozeman eyes the ball during his win over Butte’s Brett Badovinac in the championship match of the Open Division Sunday at the Elks. (Bill Foley photo)

Mike Hitchcock of Butte picks up the ball off the back wall during his Golden Masters title match against Livingston’s Rick Edwards during the Montana State Handball tournament April 8 at the Butte Ekls. (Bill Foley photo)

Butte’s Mike Hitchcock played in two divisions, and he dropped tough championship matches in both on Sunday.

The win means Criscuolo will play in the Open Division in the future.

Joe Urbani won the A Division, which is for players who lost in the first round of the Open.