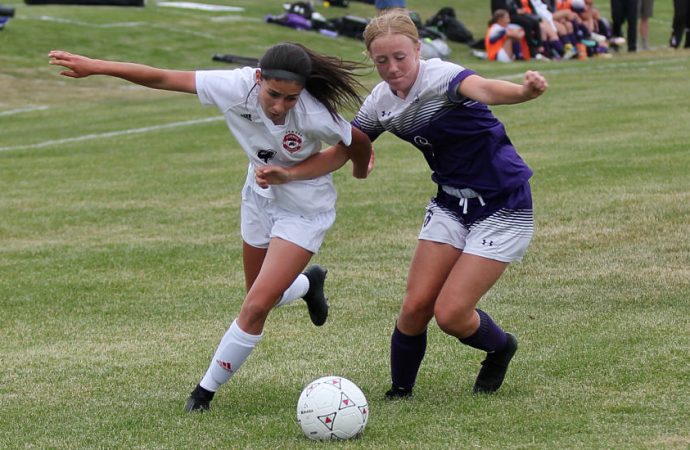 One half is coming along nicely in the Butte High girls’ soccer team plan. The second half, though, remains perplexing.

Bozeman scored four second-half goals Tuesday to break open a tight game and come away with a 5-0 Eastern AA Conference win over against the Bulldogs at the Jeremy Bullock Memorial Soccer Complex.

One of those first-half goals yielded was Tuesday when the Hawks’ Addi Ekstrom took a pass from Hana Scott across the net and booted it in from short range in the 22nd minute. The half ended with Bozeman clinging to a 1-0 edge.

The Butte High defense had been up to the challenge against of Montana’s top programs, and the Bulldog offense was showing some spunk with a few tries or drives toward the goal. Senior goalkeeper Payton Carver fended off the Hawks well in the first half, and was victimized by a couple instances of bad luck in the second.

“I don’t have any stats, but Payton had a lot of saves,” McNabb said. “She was really aggressive playing off her line.”

Bozeman broke second-half ice quickly with a tricky goal, an angled shot by Holly Lucky that spun English in travel language and squirted oddly between Carver’s knees. It came eight minutes after intermission and, then, about three minutes later, the Hawks struck again. Sophia Robinson was set up by a Katie Hayes past and tucked into the back left corner of the net.

The Hawks were suddenly rolling with a 3-0 lead.

“Some of it, well, it’s with the teams we’ve played,” McNabb said about the second half being a tough nut for the eager Bulldogs to crack. “(Billings) Skyview is No. 1, (Billings) West is No. 2 and Bozeman is No. 3. It’s like they just realize (that the Bulldogs are playing right with them) and notice “Hey, we’re tied with Butte,” and they pick it up in the second half.

“We’re a team that’s going to start being a team that wins and not be happy with trying, or being close. We now have to learn how to win.”

Bozeman finished out with two more goals, one, a blast from the front of the goal by Payton Putnam, assisted by Luckey. The last, scored in the 78th minute of the 80-minute contest, was by Kylee Jones as she bounced a shot off the left pole and into the mesh. Taryn Tudsbury assisted.

Butte HIgh played without senior forward Marti Ludwick, who suffered an ankle injury last weekend in a loss at Billings West. McNabb said he expects that she’ll miss one more game, then return to the lineup.

Another senior, Aspen Lovshin, moved from her center midfielder station to play Ludwick’s position for the first time in her high school career.

He also liked the way junior Haley Herron entered the lineup and played midfield, where Lovshin is the usual starter.

“She was an absolute beast,” McNabb said, talking about Herron’s physicality and toughness in the middle of the field.

Most of the Bulldogs’ shots were wide of the net, but Bozeman goalie Carli Springer also registerd two saves.

“The amount of possessions we had against Bozeman was awesome,” McNabb said. “Our team was being a threat. It was possessing the ball. A lot of that offense came through Ally Cleverly (senior defender).”

The Butte High girls are now 0-3-2 for the season, and will play on Saturday against Billings Senior in Billings.