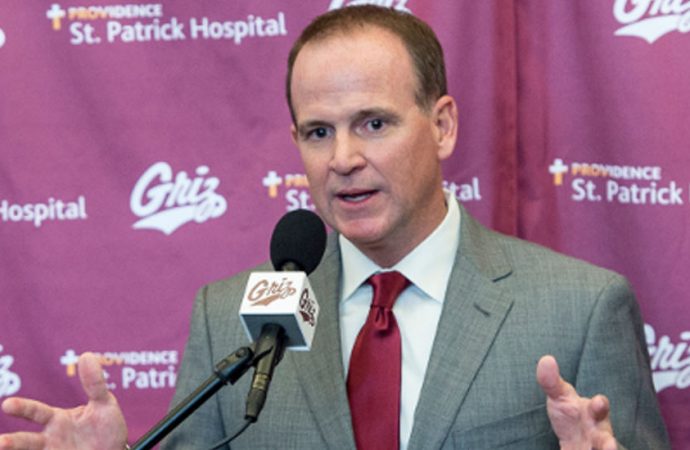 Bob Stitt addresses the media after being named head coach of the University of Montana football team on Dec. 19, 2014. (UM photo)

MISSOULA — Bob Stitt is no longer the head coach of the University of Montana football team, the league announced this afternoon.

The move comes two days after Stitt’s Grizzlies fell 31-23 at Montana State. The loss meant the Grizzlies missed the playoffs

“These decisions are always difficult, and I understand how this impacts many people,” Montana Athletics Director Kent Haslam said in a statement. “I appreciate Bob’s contributions to the University of Montana and Grizzly Athletics. He worked tirelessly to move the football program forward with a focus on overall student-athlete success.”

In three years with the Grizzlies, Stitt’s Grizzlies went 21-19 overall and 14-10 in Big Sky Conference play.

That turned out to be Stitt’s only playoff appearance with Montana. He closes his Grizzly career with a 1-2 record against Montana State.

Stitt was introduced as the 36th head football coach in University of Montana history on Friday, Dec. 19, 2014. He signed a three-year contract.

Before heading to Missoula, Stitt had a 15-season stint as the head football coach at the Colorado School of Mines, where he posted an overall record of 108-62 and an 83-44 mark in the Rocky Mountain Athletic Conference.

Haslam will hold a press conference at 4 p.m. today in the Adams Center Sky Club to discuss the decision.

Grizzly Athletics will provide a live stream of the press conference on Facebook at https://www.facebook.com/MontanaGrizFootball/