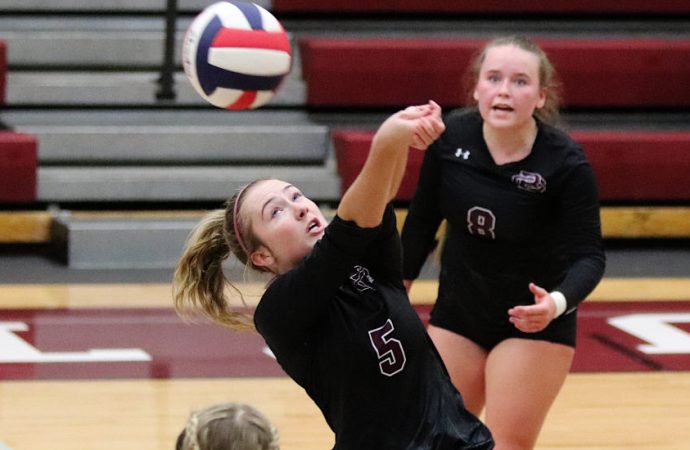 The Blue Devils impressed in a Western A Conference sweep over Butte Central Tuesday night, topping the Maroons 25-13, 25-18, 25-23 in the Maroon Activities Center.

Madeline Gilder was a driving force for the defending state Class A champions. The 5-foot-11 junior pounded 21 kills and sizzle a pair of aces in a match that saw Corvallis be dominant in the early goings, then fight off BC as the Maroons adjusted and rallied.

“They’re always tough,” Butte Central head coach Becky Hancock said of the Blue Devils. “But, we have to work on not getting off to slow starts.

“There was a lot of emotion out there tonight and sometimes when we do have that we don’t do everything we have to do together.”

The Maroons honored their seven seniors in pre-game acknowledgements. The players were introduced with their parents and other family members. The honorees were Sophia Burton, Delaney Hasquet, Avery Kelly, Mati McGree, Amira Bolton, Maci Reopelle and Marissa Anderson.

“Progressively, we worked our way into the fluidness of the game,” Hancock said. “We eventually forced them into some mistakes. The key for us is to shut down (the opponent’s) dominant player and tonight, (Gilder) was good. They picked our defense apart tonight with tips and hitting. We need to read the hitters a little bit better.”

Marissa Anderson of BC goes up to defend a hit by Madeline Gilder of Corvallis. (Bill Foley photo)

The coach said the stop-and-go nature of the season due to the pandemic and quarantining associated, has interrupted the development of the BC team. However, she also reminded that most teams are slogging through similar circumstances.

“Finding that rhythm and consistency has been difficult,” Hancock said. “It seems like we’ve been in a lot of, lately, but haven’t had a lot of practices. It’s not an excuse. The girls are working hard, we just need to find the consistency.”

Corvallis raced out to a 7-1 lead in the first game and never trailed in the set. Gilder scored four kills and a block among the Blue Devils’ first seven points. Corvallis steadily widened the gap and had a 20-10 cushion after a kill by Gabby Krueger. Another Gilder kill moments later notched set point at 24-12. Freshman Ella Moodry answered with a kill for BC before the set ended on a kill by Blue Devil Brooke Powell.

Butte Central competed evenly with Corvallis early in the second set. The Maroons had a 1-0 lead after a Moodry kill, and led by one and two points later as the Blue Devils suffered a rash of hitting errors. The BC girls were learning to obstruct and pressure a little better against the Corvallis attack. Powell served an ace to create a 10-all tie and the Blue Devils took the lead for good when a Butte Central shot traveled past the end line.

Corvallis built on the lead, reaching set point at 24-18 when a Maroons’ shot tangled in the net. Jenna Jordan fenced a block at the net for the Blue Devils’ winning a point. Jordan and Gilder finished with two blocks apiece in strong net play.

Confidence rose for Butte Central, though, as a result of the competitive second game.

“We forced some mistakes and fed off of that momentum,” Hancock said. “We were in the third game.”

It didn’t look like the Maroons would be. Corvallis ran out to a 7- 0 advantage as Gilder and Madison Lewis led the charge with a pair of kills apiece. At 13-5, after a BC hitting error, the Blue Devils had their biggest lead of the set. Butte Central began working back.

Kelly served a four-point run punctuated by two Bolton kills. The margin remained four to five points much of the remainder of the match, Burton rallied the Maroons from the service line in the waning moments. A Moodry kill off a Moodry serve cut the difference to 24-21. The Blue Devils had notched match point two serves earlier on Gilder’s 20th kill.

Corvallis was called for a double-hit and the spread was suddenly only two points, 24-22. The BC girls pulled to within one, on an Anderson stuff block. Gilder, though, wound up with the last shot and pasted it past the Butte Central back row and inside the boundary for the last kill.

The Blue Devils went to 11-1 for the season with the win.

Butte Central will be home against Dillon on Thursday with records of 3-5 for the year and 2-4 in conference. Bolton’s seven kills and Moodry’s six led the Maroons’ attack against Corvallis. Hasquet served an ace, Bolton had 12 digs, Reopelle nine assists and Kelly posted three blocks for team-highs.