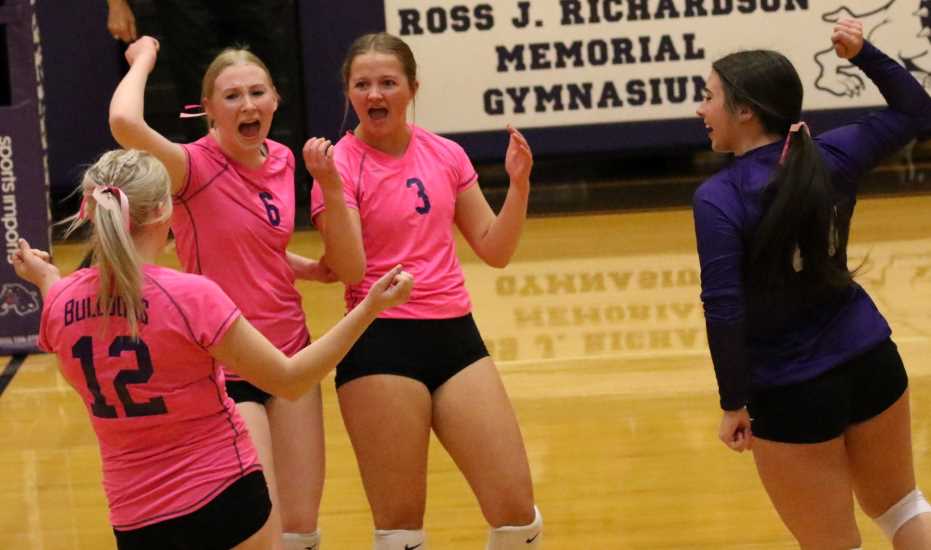 Set 1 had the Bulldogs keeping close to the Eagles in the first few plays then a spark by Averie Olsen’s serving moved the Bulldogs into their first lead 7-6.  However, the Eagles came back and at 13-8 with Butte trailing, Coach Shane Jorgensen called a time out to make adjustments.  After the break, the Bulldogs responded with a quick block and kill from Olsen which changed the momentum getting within reach at 12-13.  The Bulldogs continued to fight to keep the score close.  As the set neared completion, the Bulldogs were able to get within two points of the Eagles 20-22, but the Eagles strong front line knocked down some hits to finish with the win 25-20.

Set 2 started out with both teams exchanging points until the Eagles were able to capitalize on some Bulldog errors and to break open their lead 12-6.  Butte took a time out as they saw the Eagle lead increase to 16-8.  A big block by Olsen and Cleveland along with a middle kill by Rosenleaf caused the crowd to cheer, but the Eagles continued to hammer the hits as they expanded their advantage to 20-10.  The Bulldogs couldn’t get their offense clicking and ended the set losing 25-12.

The Bulldogs gave the fans some intense action in set 3 when they stretched out the playing time for a victory of 29-27.  The start was all Eagles as they moved to a lead of 14-9 before Butte High took a time out to re-group.  Butte stayed within reach, then the momentum changed with some hard hits by Laura Rosenleaf and powerful serving by Britlyn Stewart.  The Bulldogs where trailing by just 3 points 22-19 when Big Sky decided to call a time out to stop the Bulldog momentum.  Butte High was on fire and continued to scramble and hustle and pound the ball swapping points with Big Sky as the set was tied 5 different times until Olsen and Rosenleaf’s consecutive kills finally won the set 29-27.

Set 4 again displayed solid play from both teams as the point spread was never more than four points but the Bulldogs couldn’t break into the lead.  Kautzman displayed some tough defense while the front line pounded on offense, but Butte High came up short 25-20 to end the match.

The Bulldogs play next week Thursday at home against Helena Capital.