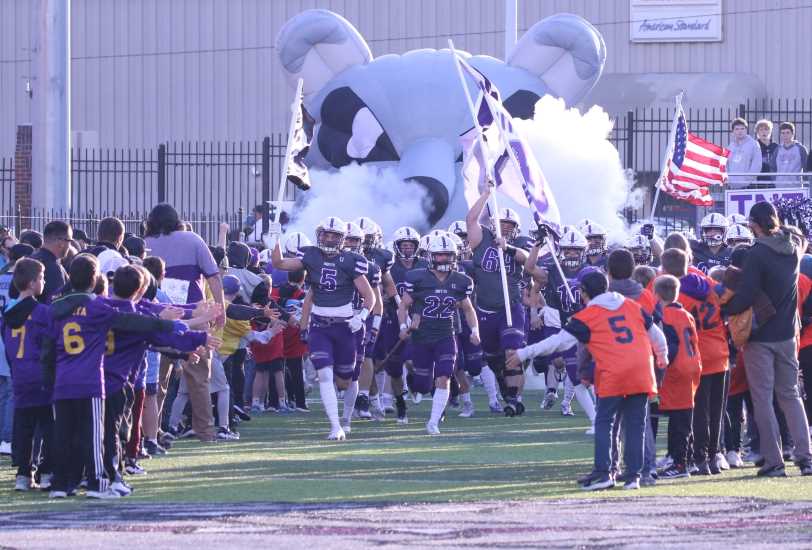 The Butte High Football team is facing a big night at Naranche Stadium this Friday.  It’s Homecoming 2022, Silver B night, and the 11th Anniversary of the first game played at their remodeled stadium. That’s a lot to handle with the Big Sky Eagles soaring in to town.

The week has been filled with plenty of fun Homecoming activities. It will continue tomorrow with the Homecoming Parade, and the crowning of Homecoming king and queen at halftime of the game.

The Silver B’s will hold their annual induction dinner at the Elks Lodge- doors open at 4pm and dinner is served at 5pm. They’ll hurry over to join the hometown crowd at Naranche for pre-game introductions of the 1997 Silver B’s and the 1972 Golden B’s, as well as a special welcome to Diamond B Jack Saunders.

Tomorrow night will also be a celebration of the 11th Anniversary of the first game at the newly remodeled stadium.  On September 23, 2011 the Bulldog varsity played their first game at Naranche in 38 years. They started off a new era by defeating Billings Senior 21-12.

Due to the many extra activities before the game, kickoff has been pushed back until 7:30pm.

There are plenty of events for the Bulldog faithful to appreciate; but the ‘Dogs will be focused on the Big Sky Eagles.  The 1-3 Eagles are coming off back-to-back conference losses to two of the top teams in the State.  Big Sky lost their opener to Gallatin 46-6, and then travelled to Billings. Big Sky defeated Skyview 20-12 in OT.  The Eagles returned home in Week 3 against the Glacier Wolf pack. They went toe to toe with Glacier for the first two quarters before the Wolfpack put up 38 unanswered points for a 55-14 win.

Last week the Eagles took a hard loss against the 2nd ranked Helena Capital Bruins, 56-7. The Bruins  put 42 points on the board in the first half. Don’t let those scores fool you. The Eagles are a great team. Coach Matt Johnson feels this year’s team has more depth and experience than seasons past. He thinks his kids are hungry for a win.  The 12th year head coach knows his team will play physical football and will not back down.

Junior Drew Martin leads the offense with 43 completions on 93 attempts for 460 yards (averages 115 yards per game).  Martin has thrown 3 TD’s, but has been picked off 7 times this season.  Colter Ramos is Martin’s favorite target. Ramos has 23 catches for 301 yards and 2 touchdowns.

Joey Sandberg is the leading rusher, averaging 34 yards per game.  Martin can also claim the team’s 2 rushing touchdowns. The Eagles run a wing-T offense, like we’ve seen Capital run in the past.  On defense Big Sky changed up their look. It’s going to be tough to match the pressure they bring.

Defensive Back Aiden Marceau is the team’s leading tackler. He averages 10.5 per game.  Sandberg averages 8 tackles per game from his linebacker position.  As a team, the Eagle defense has 14 tackles for a loss and 2 sacks.

“Big Sky is a very talented team that will play very physical football. They bring a tough brand of football every game.” Bulldog Coach Arie Grey added, “They play four quarters no matter the score.”

Grey was very pleased with his teams performance last week against Kalispell.  “We were better in the ground game on both sides of the ball. We were better on making big plays and on preventing them.”  He added, “That was the best effort of the season. We finally put together 4 strong quarters.  Now we have to do that every game.” 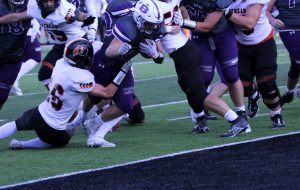 The 2–2 ‘Dogs ran for 175 yards against Flathead. Trey Hansen lead the way with 18 carries for 71 yards and 4 touchdowns.  Jace Stenson added another 64 yards on 13 carries with a touchdown. Kale McDonald also carried the ball 4 times for 34 yards.  Before last Friday, the ‘Dogs had only averaged 92 yards per game.

Jace Stenson had another good night passing He completed 19 of 28 attempts for 218 yards and a touchdown.  The Senior has thrown for 1,069 yards and 9 touchdowns in four games. He also has 2 rushing touchdowns.  Stenson is averaging 266 yards per game passing and 59 yards per game running. 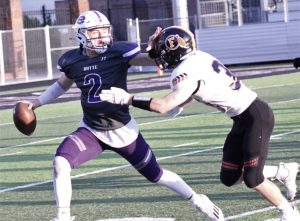 Freshman Cade Stajcar grabbed 7 passes for 57 yards and Sean Ossello made 3 catches for 78 yards. Ossello made the long grab of the night at 57 yards. His play set up an important Bulldog scoring opportunity.  Karson Pumnea also snagged one catch for 35 yards to set up a scoring play for the ‘Dogs.  Jonas Sherman had the lone touchdown reception on a 7 yard pass from Stenson. 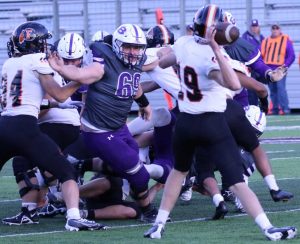 #69 Zach Tierney in pursuit of QB

The defense was led by Maverick McEwen, Ethan Cunningham and Isaac Kohler with 6 tackles each.  Luke Garrison returned to his linebacker position and contributed 5 tackles and 1.5 tackles for loss. For the second week in a row, Kale McDonald intercepted a pass to stop a scoring threat.  Kyler Stenson added 4 tackles and the lone Bulldog sack against Flathead.  The Braves quarterback will have nightmares of Zach Tierney for the rest of the season.

“Homecoming and Silver B night together makes for the biggest night of the year for us,” Grey stated. “Our kids know the importance of the game and will be ready.”