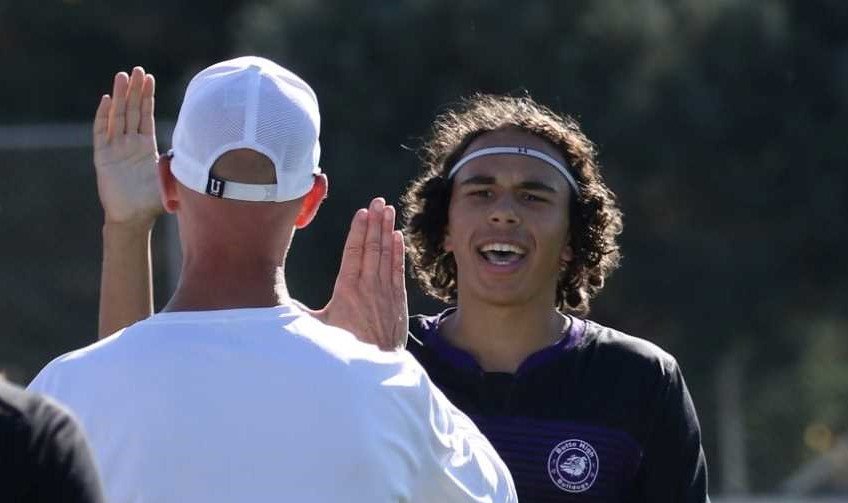 The Butte High boy’s soccer team hosted Flathead at Bulldog Memorial Stadium this afternoon.  The game was physical and hard fought on both sides for the entire 80 minutes of play.  After two ties in their last two games, the Bulldogs closed the regular season with a thrilling 2-1 victory over the Braves.

Even after the long road trip, Flathead came out fast and caught Butte High playing a little flat footed.  Carter Bullins scored the Braves only goal of the match just 3 minutes in.

Butte High evened the score when Jack Luoma shot a free kick that Flathead’s goalie deflected only to have Boyd Dewitt put the ball in the net.

The Bulldogs took the lead for good when goalkeeper Joe Schrader found Cameron Tobiness on a booming kick which led to a fast break down the middle.  Tobiness sent a 25 yard shot so hard into the right side of the goal that it tested the strength of the new nets.  The Bulldogs took the 2-1 lead into the locker room at halftime.

The 2nd half proved just as physical and both teams had many chances to score.  Possession of the ball was fairly equal the entire game with each team taking good shots on goal after building up long passing sequences.

The sure hands of Schrader had some great saves in the 2nd half to protect the Bulldog lead.  He and his defense of Zane Fredlund, Bridger Schutte, Cooper McKee, and Reid Whitlock protected their goal very well.

Riley Doyle and Mack Williams held strong in the middle field and consistently put the Bulldogs into scoring opportunities.  James Hadley, Eddie Kazmierczak, Hunter Holms, and Jake Ricci split time running up and down the field on the midfield wings.  However, neither team could score in the 2nd half, and both teams were notably worn out as time expired.

After the game, Bulldog Coach Cody Carpenter shared, “it was great for our team to come away with a victory as we head into the playoffs.  We have 10 seniors who are not ready for their high school soccer career to end.  Their leadership, courage, and determination encourages both our supportive fans in the stands and the younger kids in our program.”

The Bulldogs finished seeded 5th in the conference with a 5-6-3 record.  The 4th seed, Sentinel Spartans, will host Butte High on Tuesday, October 18 at 4:30 pm in Missoula.