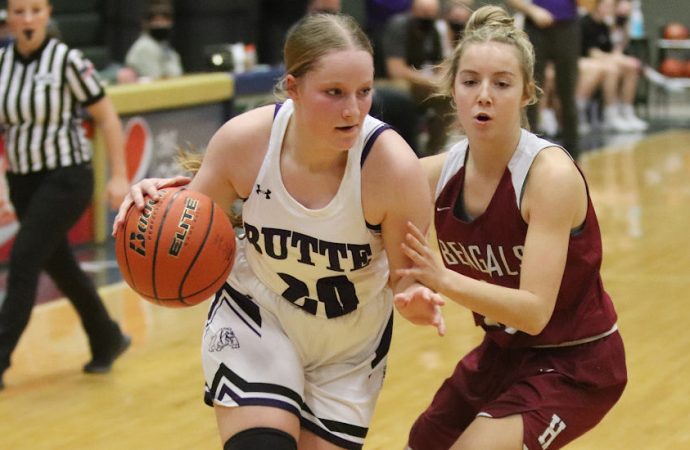 A rugged first quarter of bruise-ball set the early competitive tone with both Helena High and Butte High earning the other’s respect.

The long, opening first quarter saw 15 fouls called and 16 turnovers signaled while Butte High took a 17-15 edge. The teams were never separated by more than seven points, which happened only once – when the Bengals held a 29-22 margin in the second frame.

“We came up a little bit short,” Butte High head coach Maury Cook said. “I think in the first half, we let them have too many offensive rebounds and we had too many turnovers.”

The Bulldogs tightened up on both in the second half and ended up outrebounding Helena High by 10 boards, 32-22 for the game. They also came out with fewer overall turnovers, 19-22.

They were within range of pulling out the victory. The Bengals took a 45-42 advantage into the fourth quarter and widened the gap to 47-42 on a pullup jumper by Kylie Lantz. Butte High shot past them six straight points – two free throws each by McCaul McCarthy and Tylar Clary sandwiched around a put-back basket by 6-foot-3 junior Ashley Olson.

Butte’s Ashley Olson posts up on Helena’s Kim Feller as she looks for a pass from teammate Madalynn Rhodes. (Bill Foley photo)

Alex Bullock rallied Helena High back with a 3-point basket from deep origin and then a jump shot from just inside the perimeter. Bulldog MacKenzie Tutty scored on a driving layup, leaving the score at 52-50 in favor of the Bengals with 4 minutes, 15 seconds left to play.

The teams exchanged points to when Kodie Hoagland sank two free throws for Butte High to knot the count at 56-all and the clocking displaying 1:01. Butte High was unable to score again. The Bengals broke the tie on a Reegan Walsh foul shot with 54 seconds left, then finished the scoring with another Walsh charity toss at 13 ticks. The Bulldogs attempted a 3-pointer with 13 seconds to go, but it missed and the rebound caromed out of bounds. Helena High inbounded the ball and had possession to the buzzer.

Notably, Hoagland shot 10-for-10 from the free throw line while leading Butte High with 17 points. Olson scored nine points and pulled down a game-high nine rebounds. Tutty knocked down 14 points.

Bullock, a 5-9 sophomore, led the Bengals with 14 points.

“Hats off to Helena,” Cook said. “They’re a solid team

“We’re kind of a bull-in-the-china-shop on offense. We get too deep on our drives to the basket, and we sometimes are too unselfish. We pass up the layup to pass back out to a shooter who might not be so open. “But we are starting to get into our offense and into our defense.”

Tutty drilled her first of three 3-pointers with 28 seconds left in the first quarter, giving her team a 17-15 edge at the break. The Bengals, however, surged to 35-31 lead by halftime as Maloree English scored eight points off the bench.

A back-and-forth third quarter ended with Helena High in front 45-42 after a basket by Brooke Ark and a freebie made by Lantz.

“We shot pretty well (23-for-30) on our free throw opportunities,” Cook said. “We made more than we missed. (The Bengals) were more aggressive in the beginning and we were made to adjust to that right away. But I hope every game we play is like that, except that we come out the winners. We have to adjust to that intensity.

“We are taking care of the ball better when we’re coming out to the perimeter, but sometimes, our offense is hair-on-fire.”

“This year, every game is conference, so it is important to win,” Cook continued.”

The loss dropped Butte High to 1-2 for the season, also in conference play. The Bulldogs are to next play on Thursday in the Civic Center against Glacier High of Kalispell.

Five different players caged 3-point shots for Helena High, which squared its record at 1-1. The Bengals were 8-for-17 from behind the arc.

Crowd numbers were limited to two persons per player due to social-distance rules associated with fighting the pandemic.