Bengals battle back to bite Bulldogs for 46-42 win 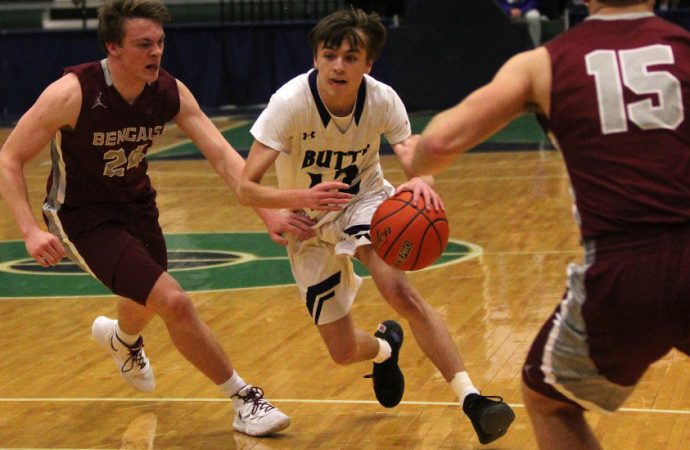 Billy “The Kid” Kelly was on his way to a career game Saturday at the Butte Civic Center.

The Butte High junior, whose middle name is Bonney after gunfighter William H. Bonney, scored 12 points in the first half. That includes a run of when he scored 10 straight Bulldog points in the second quarter to help build a 30-22 halftime lead over the Helena High boys’ basketball team.

Early in the third quarter, the game took a bad twist for Kelly and the Bulldogs.

Kelly landed on an opponent’s foot, suffering a right ankle injury that kept him out of the rest of the game.

Butte High could only muster 12 points after the injury, and the Bengals left town with a 46-42 Western AA victory.

“It killed us,” Butte High coach Matt Luedtke said of the injury that forced Kelly to leave the gym on crutches. “We just hope that he is going to be OK, and we’ve got to get back to the drawing board so I can figure out how to turn it over less and make more baskets, I guess.” 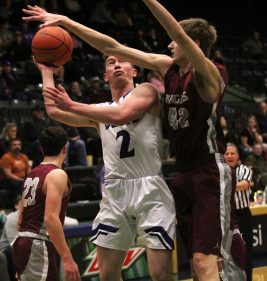 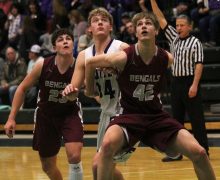 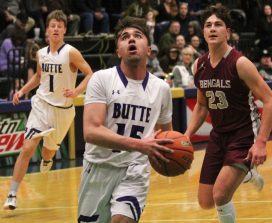 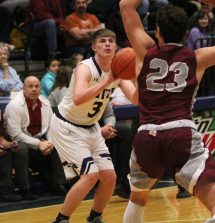 Compounding the injury for the Bulldogs was that fellow guard Tommy Mellott had four fouls at the time. He was forced to play more cautious the rest of the way.

The injury also came as a change in plans for the Bulldogs was working to perfection.

“We decided to move (Kelly) off ball and have Tommy move it up because Tommy is more of a distributor,” Luedtke said. “Billy embraced it and was so great in the first half. Obviously, we had a tough time scoring without him in the second half.”

The Bengals scored eight straight points to open the third quarter.  Dexter Tedesco hit a 3-pointer, Kaden Hout turned a three-point play, and Tedesco turned a steal into a layup to tie the game at 30.

Butte High responded with buckets by Andrew Booth, Jake Olson and Cael Stenson, but the Bengals took a 38-37 lead with a 6-0 run capped by a Burgin Luker bucket.

Ryan Burt scored off a Stenson pass to tie the game at 38 40 seconds left in the third.

The fourth quarter was one of missed opportunities for both teams, but more so for the Bulldogs.

The Benglas took the lead for good early in the fourth quarter when Sam Norum hit one of two free throws. The 6-foot-9 junior made it a 41-38 game with a two-handed dunk with 6 minutes, 2 seconds left in the game.

Norum, though, was called for a technical foul for hanging on the rim on the dunk that was not clean. Butte High argued the basket should not count because the ball was rolling around the rim as Norum was pulling it down.

The argument was unsuccessful, but Mellott sank both technical free throws to cut the lead to 41-40.

The rest of the points from both sides came from the free throw line. The Bengals shot 5 for 11 down the stretch, while Butte High went 2 for 7.

Butte High also missed a few potentially huge 3-pointers in the final minutes, including one by Booth that rolled around the rim three times before falling out.

“We had a ton of opportunities late,” Luedtke said. “ I think we had four 3-pointers rattle in and out. It’s just one of those days when things didn’t go right for us. They went right for us in the first half, and they didn’t in the second half.”

Booth scored 10 of his 12 points in the first half. That included a bucket and a 3-pointer to turn an 11-all tie into a 16-11 Bulldog lead early in the second quarter.

A hoop by Kenley Leary made it an 18-13 advantage before Tedesco sank a 3-pointer to cut the lead to two points.

Kelly, who fed Booth for a bucket with a beautiful pass in the first quarter, scored Butte High’s next 10 points. That run included a bucket off a Mellott pass and a drive for a three-point play.

Then, Kelly fed Stenson for a bucket to put the Bulldogs up 30-20.

Austin Zeiler hit a pair of free throws for the Bengals 12.6 seconds before halftime, but the Bulldogs sailed into the break with the eight-point lead.

Everything changed after the break.

“I’m disappointed for the kids,” Luedtke said. “That was one that we were in control of until Billy went down, and it changed the complexion of the game.”

Helena improved to 2-4 overall and 1-1 in league play.

Blake Drakos and Mikey O’Dell also played for the Bulldogs, who fell to 2-5 and 1-2.

Olson, Butte High’s 6-8 junior post, failed to score in double figures for the first time this season. He was still a force on the glass.

Luedtke indicated the lack of scoring for Olson was not the fault of the big man.

“They did a good job keeping it out of his hands,” Luedte said. “We were trying to get him the ball in the second half. In the first half, we really didn’t need to because we were doing a good job scoring the basketball from the perimeter. When Billy went out, we tried to get it in to him. Obviously, we’ve got to work on some post passing.”

“They’re a physical team, and we probably didn’t do a good enough job being aggressive to the basket,” Luedke said. “But it’s hard to be aggressive when we’re turning it over like that.”

The Bulldogs will play a pair of Western AA games in Kalispell next weekend. They’ll take on Flathead on Friday before playing Glacier on Saturday.

Luedtke said he is keeping his fingers crossed that Kelly will be able to play in those games.