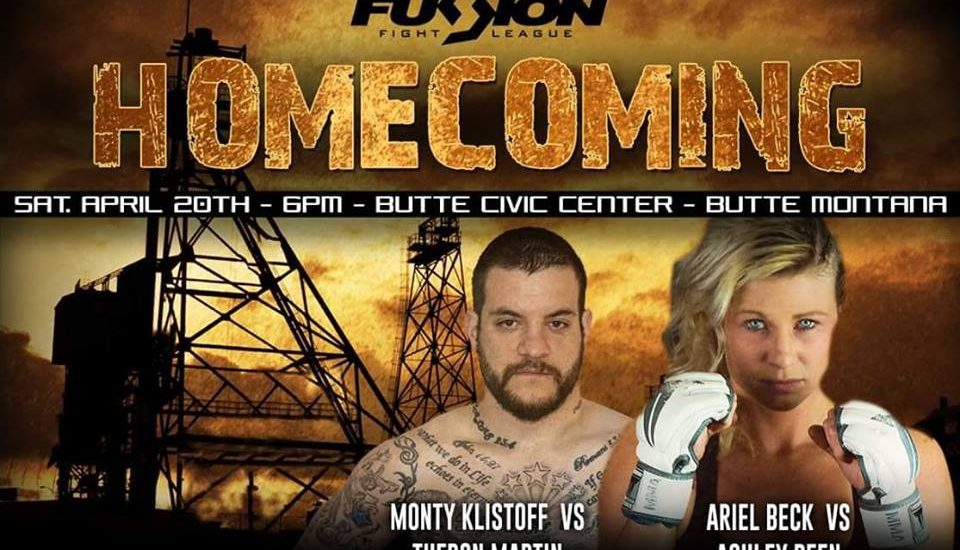 The local MMA fighters will both be making long-awaited returns to the Mining City when they highlight a “Homecoming” fight card promoted by Fusion Fight League on Saturday, April 20 at the Butte Civic Center.

Neither of the fan favorites have fought in Butte in several years.

Klistoff, 25, who claims Butte and Anaconda as his hometown, will fight Theron Martin of Great Falls in a 170-pound bout.

Beck, 28, a Deer Lodge native who lived and trained in Butte before recently moving to Belgrade, will battle Ashley Dean of Colorado in a title fight at 125 pounds.

Both Beck and Klistoff look forward to fighting in front of their hometown fans.

Beck, who brings a 4-5 professional record into the bout, has fought with Legacy, Invicta and the UFC since she last entered the Civic Center cage.

“I have never been in front of a better crowd than Butte,” Beck said. “They’re so loud. They’re so genuine. Butte is a fighting town.”

Her fighting career began as a boxer, and punching has long been Beck’s strong suit. In the past, Beck has tried to avoid hitting the mat with opponents, electing to stand and punch. For the better part of the last year, however, she has been working on her ground game.

“This time its like, ‘Maybe we’ll take her down,’” Beck said with a sly smile. “Finally, I have a different plan that is not just punch them.”

Beck has overcome a handful of injuries, including one that required surgery on her knee. She’s lost 90 percent of the meniscus in one knee. She’s also suffered concussions, which has helped lead her to a different fighting style.

Klistoff, a 2012 Butte High graduate whose family moved back and forth from Butte and Anaconda, fought for the first time in three years in January.

He was driving a semi around Montana and was weighing in at about 220 pounds. Klistoff got down to 170 pounds for a January fight against Kerry Lattimer.

Klistoff felt he was winning before getting stuck late in the third round.

“The cut got me,” Klistoff said of losing 50 pounds so quickly. “I was doing well with my cardio, but the dehydration from the cut got me.”

Now walking around at 188 pounds, Klistoff feels like his body is ready. He also feels like he’s a better fighter after the layoff, much like Anaconda fighter Eric Hempstead was after his brief retirement.

“He came back a lot better fighter,” Klistoff said of Hempstead. “He punched harder and his technique was better. I feel the same way.”

“I’m hungry and my fighting is better. I feel bad about it, but I’ve been knocking out my sparing partners.”

Klistoff, who has been training at Montana Tech, always felt his wrestling was strong. Now, he said his Jiu Jitsu is better than ever, making him very confident heading into the fight.

Like Beck, Klistoff is also counting on the Southwest Montana crowd carrying him over the top. Klistoff likens the Butte fight crowd to WWE fans.

“I don’t watch it now, but I grew up on the WWE,” Klistoff said. “WWE fans are the most loyal fans in sports. That’s what the Butte crowd is like. They just call out your name. Butte people really support the locals.”

In fact, Klistoff said he passed up two chances to fight with bigger promotions for a opportunity to hear those Butte fans calling his name the night before Easter.

“I just really want to fight in front of my home crowd one more time,” he said.

Now that he’s back from retirement, Klistoff is planning on taking his career to the next level, starting with one last win in Butte. He’s already becoming a draw in Instagram with more than 11,000 followers.

“If I get back on a winning streak, I’m really confident I can get picked up by a bigger promotion,” he said.

Beck, on the other hand, isn’t so sure about her future in the fight game now that she’s been competing for a decade. She just wants to make sure the bouts she has left really count.

“My goal isn’t to win a UFC championship,” Beck said. “I want to put on a few shows and enjoy it.”

Tickets for event are $25 for general admission and $35 for reserved seats. Tickets will be available at the Civic Center box office or through the fighters themselves.