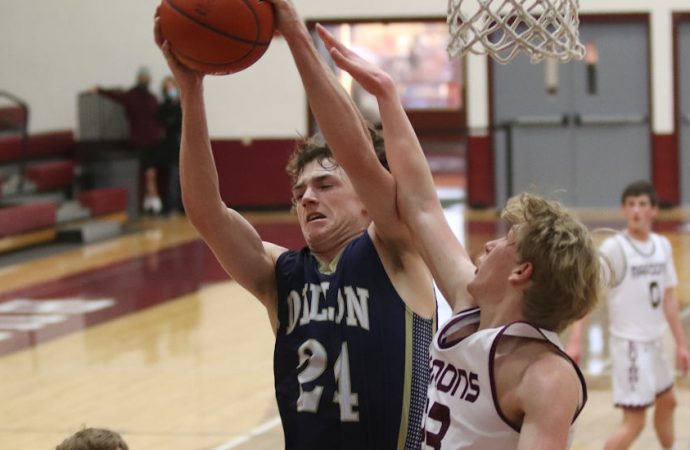 The defending Class A state champion Maroons did just, falling behind 13-0 in their first game of the season. The Maroons managed to climb back into the game, but Dillon held on for a 64-51 Southwestern A victory in front of a socially-distant crowd.

Dillon improved to 3-0 with the victory that put a damper on BC’s first game since bringing home the Class A state title from Billings 303 days ago.

Maroon coach Brodie Kelly chalked up the game as a learning experience for a team that got in just one full practice — thanks to a COVID-19 quarantine — over the last 10 days.

“We competed really hard for about 20 of the game minutes,” Kelly said. “We competed well from the 4-minute mark of the first quarter until the start of the fourth quarter. We had a really good stretch of basketball.”

Sophomore Dougie Peoples highlighted those bright stretches. The sweet-shooting lefty got the Maroons going with three 3-poitners as the Maroons closed out the first quarter with a 9-2 run.

“Dougie can fill it up, and guys were finding him in the right spots,” Kelly said. “He had a really good offensive game.”

Drew Badovinac of BC directs traffic while taking the ball down court. (Bill Foley photo)

While Peoples, a former Elks Hoop Shoot champion, joined the program with a reputation for his shooting stroke, Kelly said there is way more to his game.

“He’s got more than just a shot,” the coach said. “He’s got good skills and can go to the rim. He scores in a lot of ways.”

Peoples helped the Maroons hang around with the Beavers, trailing 32-24, before they made a run in the third quarter. That’s when the Maroons used a 14-4 surge to pull within two points.

Junior Drew Badovinac fed Kyle Holter for a hoop. Then, after a pair of Peoples free throws, Badovinac hit a running jumper to pull the Maroons to within 40-38.

“Defensively they did a nice job of forcing us to move the ball around a little bit,” Dillon coach Terry Thomas said. “They were sound, they started to rebound the ball well, and then they hit some shots.”

Two points was as close as the Maroons got.

The Beavers answered with a pair of free throws from Jace Fitzgerald and a long 3-poitner from Connor Curnow to stop the BC momentum.

“We gave ourselves a chance, but we did not play well in the fourth quarter,” Kelly said. “We had flashes where we looked good. Late in the game, I think it was more mental fatigue than anything.”

The BC coach was not about to make excuses for his team, which lost nine seniors from last year’s title run.

“They’re a good team,” Kelly said. “They had two games under their belt, and they were playing confident.”

The Beavers scored more than 80 points in each of their wins over Livingston and Stevensville.

“We feel like we have a pretty well-rounded game,” Thomas said. “We have nice inside, nice outside and some good speed. We have some nice length in places.”

In the fourth quarter, the Beavers put the game away using the 1-3-1 zone defense that helped deliver multiple state titles this century.

“We do have a little depth, and we’ve got some kids we can run in and out,” Thomas said. “They have enough speed and quickness that we feel like we can do a little pressing, a little man, some zone and kind of mix it.”

The Beavers also got six points from Daxon Graham, five from Fitzgerald, four from Jonny Reiser and two from Callahan Hoffman.