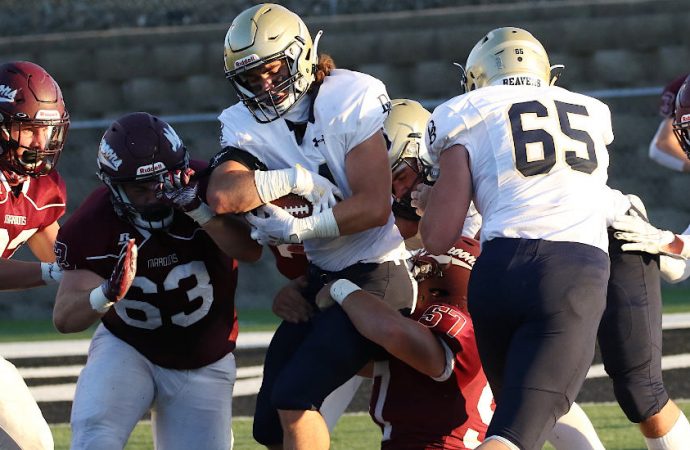 Once Dillon put Butte Central on the ropes, it wouldn’t let the Maroons off of them, Friday night.

The Beavers’ experience and execution ex’d out any hope Butte Central had of celebrating a successful Senior Parents Night game on the Bob Green Field at Montana Tech. Dillon scored three touchdowns in the last four minutes of the first half, then tacked on another on the first play from scrimmage after intermission. The eruption turned a close game of Southwestern A Conference rivals into a 41-0 Dillon victory, the Beavers’ seventh straight over the Maroons.

Senior quarterback Jace Fitzgerald had a hand in five of Dillon’s six touchdowns, scoring on two 1-yard keepers and one on a 12-yard romp, along with TD pass plays of 7 yards to Jonny Reiser and 80 to Jon Kirkley.

It was Dillon’s third win in as many games this season.

“We have to develop some consistency,” Butte Central head coach Don Peoples Jr. said. “We’re a work in progress. We have a lot of young kids playing. We’re going to stay the course, keep working hard and get better.”

The knockout punches for fourth-ranked Dillon were the TD’s scored on the last play of the first half, and then on the first snap in the third quarter. The last touchdown, at the 5-minute, 1-second mark of the third quarter started the running clock on the 35-point difference rule. If not for a blocked extra point in the first half, the Beavers would have had the running clock immediately after intermission.

However, they didn’t own the early going quite so dominantly. Butte Central ran early on the Beavers as  Lester launched his 123-yard rushing night. The Maroons punted away their first possession and the teams were stalemated and scoreless after a quarter.

The Beavers were denied by Butte Central plays twice in first-half threats. Eyston Lakkala and Luke Garrison stopped Fitzgerald on fourth down at the 1-yard line to snuff one attempt, and Lester forced a fumble from Fitzgerald on a long run by the Dillon QB. Dougie Peoples covered the fumble for the Maroons.

Dillon didn’t break through until Fitzgerald found Daxon Graham for a 41-yard gain to the Butte Central 1-yard line on a pass play. Graham leaped between two Maroons to outreach them for the ball and held it as he tumbled to the ground. Fitzgerald crashed into the end zone on the next play.

About five minutes passed before anyone struck pay dirt again, and it was Dillon that did. Jon Kirkley fielded a Butte Central punt and sped it back 51 yards before being caught at the Maroons’ 32-yard line. Another short-yardage Fitzgerald touchdown finished the drive.

The Beavers sustained a seven-play drive to open a 20-0 lead with 31 seconds left in the half. Fitzgerald passed to Jonny Reiser on a 7-yard TD play. The Maroons were determined, then, to scratch the scoreboard before halftime.

Disaster struck the Maroons, instead.

Quarterback Drew Badovinac took off on a 10-yard gallop, crossing midfield with a back trailing on the outside. Badovinac attempted a lateral as the Dillon defense closed in on him and the Beavers’ Eli Nourse broke in front of the pitch from his safety spot. He sprinted 55 yards for the back breaker touchdown as time on the first-half clock expired.

Dillon received the second-half kickoff, which sailed into the end zone. The Beavers operated from their own 20-yard line where Fitzgerald connected with Kirkley on an 80-yard big-play aerial on first down.

“We did some good things, tonight,” Don Peoples Jr. said. “We’d have a couple of good plays in a row and then miss execution on the next one. We can’t do that against a good team like Dillon.”

The coach said preparations for the game had gone well in the Maroons’ camp.

“We really felt like we had a good week of practice,” Peoples said. “But, we didn’t tackle well, tonight. We’ll get better. Dillon is a great team and we give them credit.”

The Maroons are 0-3, counting a forfeit loss to Hamilton, and on-field losses to Frenchtown and Dillon, all state contenders. They travel to Corvallis next Friday for another Western A tilt.