Bear Stillwagon, front, rides with members of the Copper Sprockets June 18, 2019 on the Blacktail Creek Trail. Stillwagon was riding through town during the a 2,745-mile Tour Divide. (Butte Sports file photo)

He hears it all the time.

Butte extreme mountain biker John “Bear” Stillwagon is used to having his sanity brought into question.

“Every day,” Stillwagon said when asked how often he is told he is crazy. “Every day.”

That is what comes with the territory when you race your mountain bike on the Continental Divide Trail from Canada to Mexico. It happens when you ride the Stagecoach 400 in 52 hours, 36 minutes.

Since he joined the cycling community, Stillwagon has become somewhat of a legend among even the most diehard riders. Sure, they understand what he is doing, but even they seem to think has to be a little bit off his rocker to actually do it.

Next month, Stillwagon will enhance that legend when he rides the first-ever “Butte 200.”

Stillwagon, 49, who rides for the Coca-Cola team, will be the lone rider of the “Butte 200.” That will put him at a distinctive disadvantage as he tries to win the Butte 100, which starts and finishes near Homestake Lake on Saturday, July 24.

The Butte 100 begins at 6 a.m., but Stillwagon will start riding 12 hours before that. At 6 p.m. on Friday, July 23, he will start riding the Butte 100 course. He plans to pace himself as he rides through the night, hoping to finish the course in time to do it again with the rest of the field.

Of course, this begs the obvious question: Why?

The longer the challenge, the better for Stillwagon, who placed ninth in the Tour Divide in 2019. That is a 2,745-mile race that Stillwagon finished in 16 days, 19 hours, 44 minutes. That was good for ninth place.

He stated that his goal was 21 days when he started the course from Banff, Alberta, to the U.S.-Mexican border. The course includes a trip down Big Butte into the Mining City. Riders don’t have support teams. They are on their own during the race that includes nearly 200,000 feet of elevation climb along the way.

“To finish, I think I rode like 19 hours, took a 4-hour nap, and then rode 27 hours to the finish line,” Stillwagon said.

Less than a month later, Stillwagon placed third in the pro division of the Butte 100. 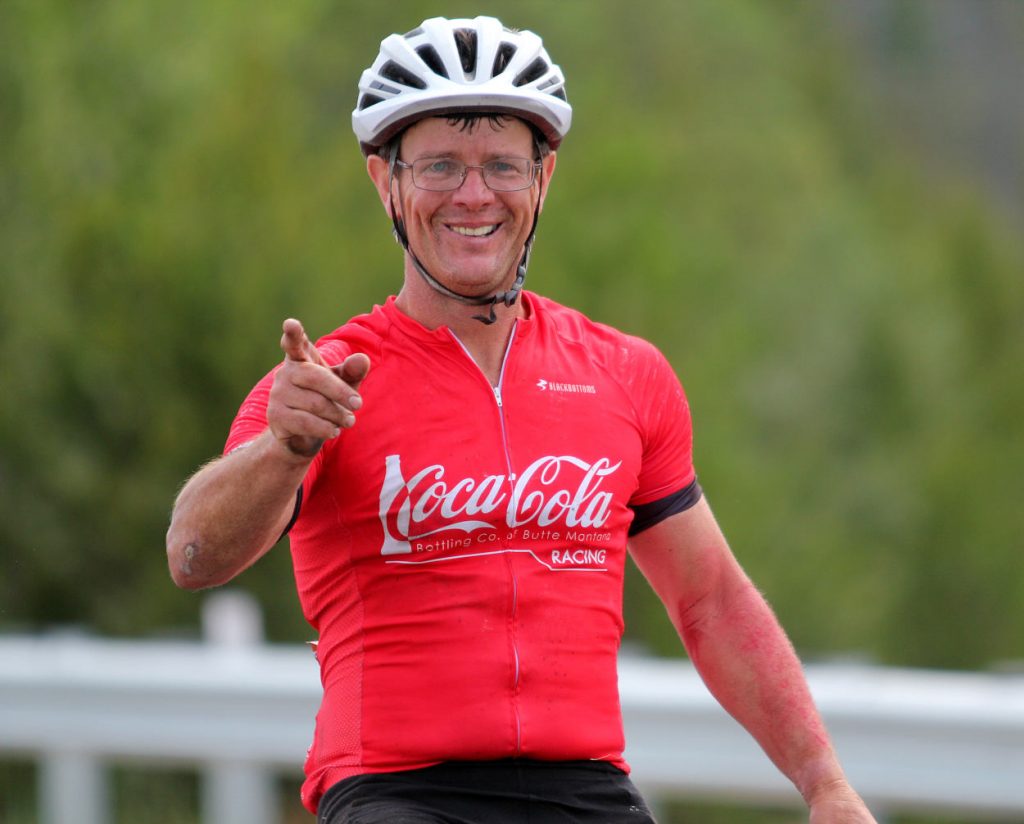 Bear Stillwagon takes his hands off the wheel as he approaches the finish of the 2019 Butte 100. (Butte Sports file photo)

Earlier this year, Stillwagon placed third in the Stagecoach 400, which begins and ends in Idyllwild, California. He finished in 52 hours, 36 minutes.

In both of those races, Stillwagon said he trailed many riders down the stretch. However, he knew a lot of those riders would quit, and he was right. Stillwagon does not quit.

“Once you start going longer, they’re really not bike race anymore” he said. “They’re really just a race of attrition. It’s about pedaling the bike and just keep moving. The longer it is, the better I am at it.”

Had someone told Stillwagon 20 years ago what he would be doing today, he probably would have thought it was crazy, too. The 1990 Butte Central graduate only got into riding a bike about 12 years ago. He has been racing for about six years.

“I had no intention,” Stillwagon said of racing. “I enjoyed riding the bike, but it really wasn’t more than that.”

He was also busy coaching multiple sports, which included a long stint assisting with the Butte Central wrestling program.

“I was chasing my kids’ dreams,” Stillwagon said. “Once they were done, I thought I’d do something for me. I thought I’d take it a little more serious.”

Last year, COVID-19 claimed the Butte 100, along with just about everything else.

Looking for something to do, Stillwagon rode the Butte 100 course on consecutive days. That got him thinking about the “Butte 200.”

Once that thought crosses his mind, there is almost nothing that will stop Bear.

He has finished the 100-mile course in less than 10 hours two times. Still, he does not see it as a gimme that he can pull off his latest challenge. The Butte 100 course, Stillwagon says, is the “real deal.”

“There are so many things that can go wrong with yourself, your body, your bike,” Stillwagon said. “Just because you make it once doesn’t mean you can do it again. If I can keep myself together and my bike together, it would be a neat thing to do.”

Mike Borduin, a friend and accomplished rider, will keep Stillwagon company on the first lap, which will take place largely in the dark.

“It’s one thing to ride those trails,” Stillwagon said. “But in the night, you with the bears and stuff, you don’t know what you’ll run into.”

One thing he could run into on the second lap is another Stillwagon.

Bear’s younger brother Nate is coming to town for the race. Nate rode raced the 2019 Tour Divide, finishing behind Bear. Their father, John, who goes by John, is also a bit of an extreme mountain biker.

Bear’s cousin, David, who goes by “Moose,” will not be riding the race this year, but he is the Stillwagon who started it all by riding in the York 38 Special in Helena several years ago.

The Stillwagon riders pose for a photo following strong performance at the 2018 Butte 100. They are, from left, John “Bear” Stillwagon, David “Moose” Stillwagon and Nate Stillwagon. (Butte Sports file photo)

Now, Bear Stillwagon is working to make sure his influence on riding goes well beyond his family. He is a coach and one of the founders of the Butte Copper Sprockets, a youth cycling team.

That team began competing in 2019. After missing last year because of the pandemic, the team will start its second season July 1.

“I like to give back. I’ve coached youth athletics for a long time in different sports,” Stillwagon said. “If I can share my love for mountain biking with young kids and get them on the right path, that is a great thing. It is so fun to be part of their careers.”

The team currently has about 20 members, and Bear is hoping for more. He invites young riders interested in learning more about the team to attend an hour-long practice at 7 p.m. Sunday at Thompson Park. Riders should meet at the Camp Host parking area near Eagles Nest.

The more riders, the better for Stillwagon, who takes such great pride in the success of young Butte riders like Max Kluck, Aiden Sorich and Will Silk.

More riders on the trails will not mean fewer people will be questioning Stillwagon’s sanity. But it might mean more people will understand.