Tears of joy, laughter and sadness fell at lunchtime Wednesday as Kloie Thatcher’s family gathered at the Maroon Activities Center.

Kloie Thatcher, the fifth of Leah Francisco and Bill “Chunky” Thatcher’s seven children, was there to sign a letter of intent to play basketball for coach Wes Keller at Rocky Mountain College.

“I think Rocky was my best fit, so I’m excited to go,” Thatcher said after the emotional signing.

Keller was all smiles. The coach said he is getting a steal with the signing of the Butte Central star guard.

“Kloie, I think, is the top point/combo guard in the state,” Keller said as the ink was drying on the NAIA Letter of Intent. “I truly believe that. She has the ability to make the game easier for the people she’s out there on the court with. She’s a phenomenal passer. She can score. She can shoot. She just makes everybody around her better.”

Thatcher signed while sitting at a table between Keller and Rocky assistant Camden Lovett in the lobby of the MAC. As she signed, she was bombarded with comments and jokes from her parents, her sisters Hattie, Baylee and Sofee and brothers Tucker and Cutter.

Kloie’s oldest sister, Alex, was there, if only spirit. Alex was killed in a tragic accident last spring.

“She’s so proud of you,” one of the older Thatcher girls told Kloie as the family gathered for photos. 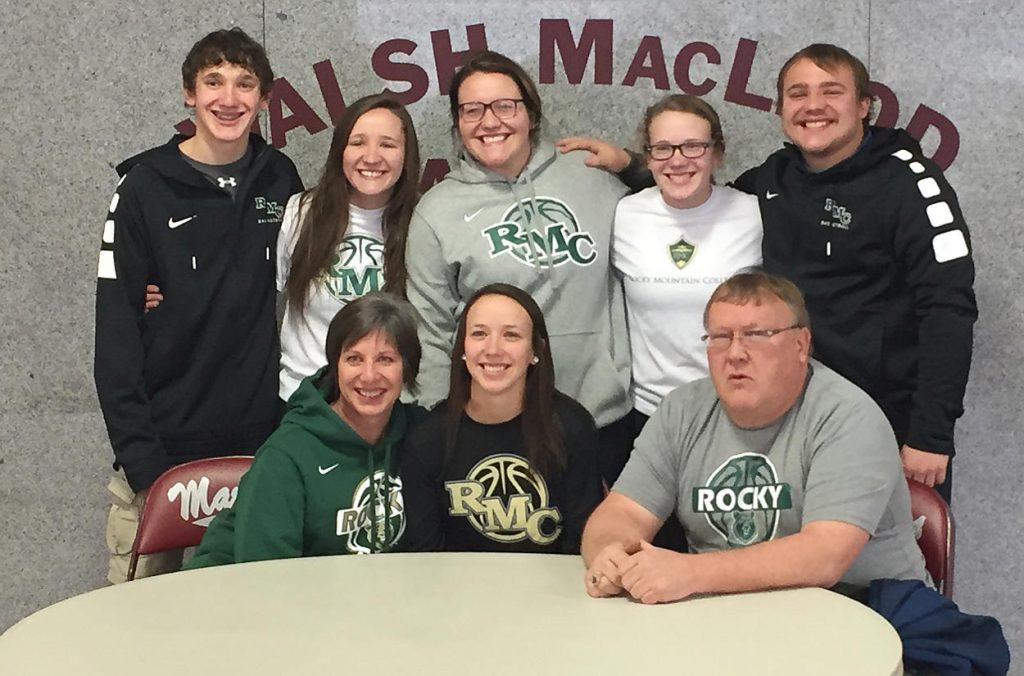 Kloie Thatcher poses for a photo with her family Wednesday. She is sitting between her mother, Leah Francisco, and her father Bill “Chunky” Thatcher. Her siblings are standing in the back. They are, from left, Cutter, Hattie, Baylee, Sofee and Tucker.

Kloie Thatcher had been leaning toward signing with Rocky for some time. Leaving home was the only thing holding up her decision, she said.

“I didn’t know if I wanted to leave Butte or not,” she said. “I think it will be good to get out for a little bit.”

Thatcher said her decision came down to Tech or Rocky, though Montana Western was in the play, too. Thatcher said she never heard a word from Montana or Montana State.

Thatcher has already done it all for Butte Central. She entered the school with high expectations, and she’s more than lived up to them.

Thatcher is a two-time All-State and three-time all-conference player for coach Meg Murphy’s Maroons. As a sophomore she helped lead the Maroons to the Class A State title.

Keller said the points total would be higher if Thatcher wanted it to be.

“Kloie is unselfish. I’d like to see her shoot a few more times, but she definitely has the ability to score the basketball,” the fourth-year Rocky coach said. “I was really impressed when she came down and played with our girls in the fall. She was making baskets and setting people up. I know our girls back at Rocky were really excited when I told them she was going to sign with our program.”

Thatcher said Keller, his staff and his players made her feel welcome when she visited the Rocky campus.

“When I went on my visit it just felt like home in a way,” Thatcher said. “The girls were super welcoming, and Coach Cam and Coach Wes are pretty cool people. I’m excited to go play for them.”

As good as Thatcher has been on the court for the Maroons, she has been just as good on the softball diamond. Again, staying close to home led Thatcher to choose hoops.

“For a while I really wanted to play softball,” she said. “I didn’t want to leave Montana. I wasn’t really willing to go out of state. It was a tough decision, but I’m happy.”

Keller, a longtime friend of the Thatcher family, had been recruiting Thatcher since he took over the women’s program at Rocky.

“This is a big signing for Rocky Mountain basketball,” Keller said. “We got a Thatcher out of Butte.”

Keller didn’t know his years of recruiting were going to pay off until Saturday when Kloie Thatcher attended a Rocky game in Billings. The coach wanted to sign her on the spot.

“I said, ‘Hey, let’s get this done so you can enjoy the rest of your senior year,’” Keller said.

However, Thatcher, who said she’s looking forward to playing pressure-free basketball the rest of the season now that her decision has been made, preferred to be surrounded by her large family, which decked out in RMC gear for the occasion.

“I wanted to sign in Billings last week, but none of my family was there,” Thatcher said. “I wanted to have them here with me. It was pretty nice.”

As the tears and laughter certainly suggest, her family wouldn’t have it any other way.