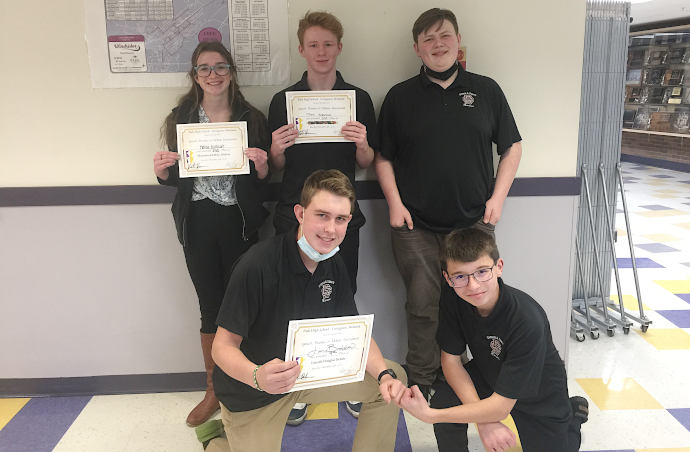 The Butte Central team poses for a photo Saturday in Livingston. They are, standing left to right, Hallie Kellicut, Ethan Andersch and Michael Peck, and kneeling left to right, Jim Bradshaw and William McAnulty. (Courtesy photo)

LIVINGSTON — It was deuces wild for the Maroons at the Livingston Invitational speech meet Saturday.

Hallie Kellicut and Ethan Andersch placed second in Memorized Public Address, and Impromptu Speaking, respectively. Kellicut also notched a second-place finish in each round of competition. Judges complimented Kellicut on her emotion and confidence in delivering her piece. Multiple judges praised Hallie’s poise throughout the meet.

Andersch, an impromptu speaker, put together round scores of 2, 3, 1 and finals scores of 5, 3, 2 to secure second place. Judges commented on Ethan’s insights into the topics he was given, as well as his speaking confidence and his ability to develop his analysis of the given topic.

Novice impromptu speakers William McAnulty and Michael Peck received praise from the judges on their speaking voices, poise and their stage presence. Peck and McAnulty both continue to show improvement from week to week, and indeed from round to round.

Jim Bradshaw represented the Maroons in the Lincoln-Douglas debate competition. Bradshaw, a novice debater, continues to hone his skills as he competes with some of the best debaters in the state. Bradshaw placed ninth, joining Kellicut and Andersch on the podium at the end of the day.

The Maroons are on the road to Laurel this coming Saturday before they wrap up the pre-Christmas portion of the season with a meet at Polson on Dec. 18.