Avery Kelly signs to play volleyball at Carroll College while sitting between her parents, Brodie and Niki, Wednesday afternoon at the Butte Central Rotunda.

Butte Central senior Avery Kelly has never been one to draw attention to herself.

Wednesday afternoon, she could not avoid it.

A group of schoolmates, friends and family gathered at the Butte Central Rotunda to watch the soft-spoken Kelly sign an NAIA National Letter of Intent to play volleyball at Carroll College.

Kelly signed the letter sitting between her parents, Brodie and Niki Kelly. Carroll coach Maureen (Tutty) Boyle, a Butte native, looked on smiling ear to ear as she locked up a player she expects very big things from in the Frontier Conference.

“She seriously just has so much athleticism that I think is untapped,” Boyle said. “A lot of females have that untapped potential, once you find it, they are kind of carefree. You do a lot of things.” 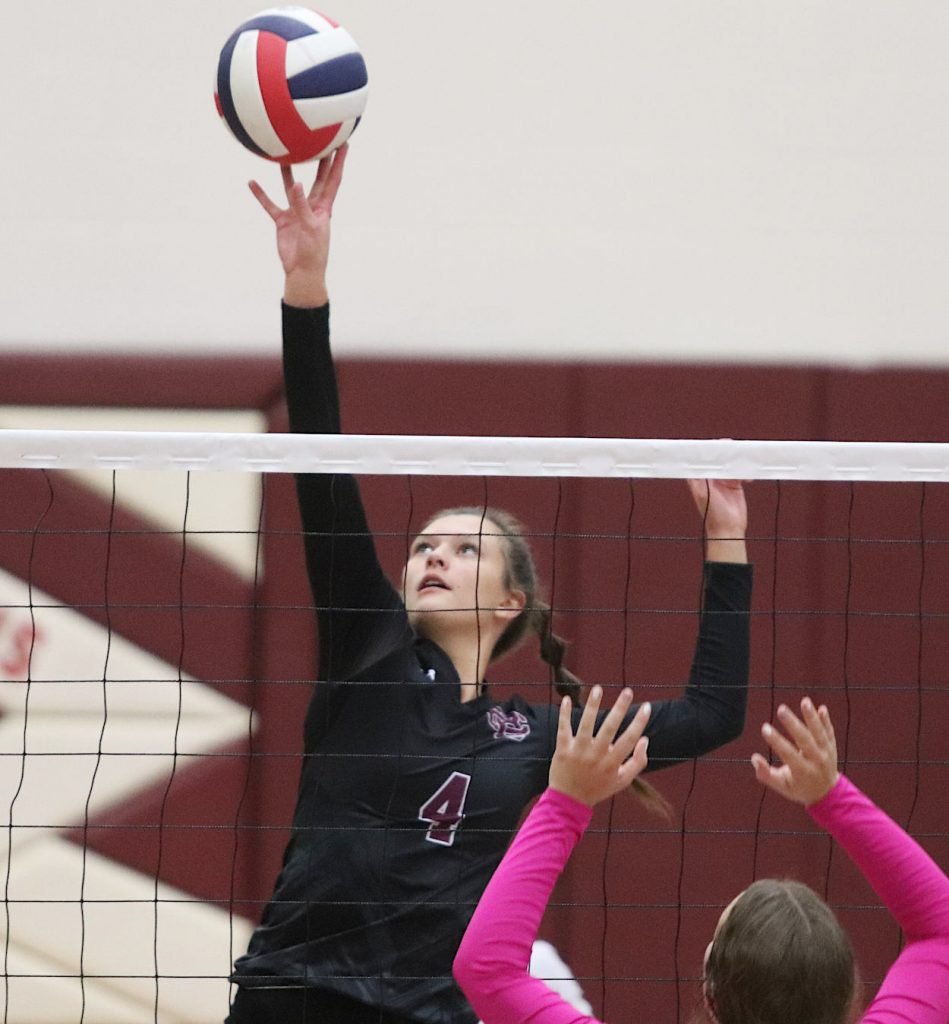 Kelly, student with a GPA above a 4.0, said signing with the Saints will allow her to continue to follow one of her true loves.

Kelly lettered in volleyball all four years at Butte Central. She also racked up three varsity letters in basketball and two in tennis, so far. Volleyball, though, is No. 1 for Kelly.

“Volleyball has just always been my favorite sport,” she said. “I’m not really a physical person, and volleyball is not like that at all. That is something that I enjoy. Since the fourth grade, I have been playing with my best friends. It’s just always been a fun experience.”

Kelly is about 5-foot-8, but her wingspan is 6-foot-1. Add a vertical leap of 22 inches, and you have one of the tallest 5-8 players on the planet.

Boyle said that makes her newest signee deceptively effective on the volleyball court.

“She appears like she is sort of … I wouldn’t say fragile … but then you see her jump and you see her swing, it’s just whoa” Boyle said. “What can you do with that the next for years? Here potential us untapped. If she learns a little bit more of the game and learns that part of it, the athleticism is already there. We’re really excited to have her.”

Williams said that Kelly is one of the best student-athletes he has worked with in his 20 years as an educator and leader. For that, he credits her parents, who both have ties to Carroll College rival Montana Tech.

Brodie Kelly, who just finished his 17th season as head coach of the BC boys’ basketball team, played basketball at Montana Tech, so he took a little ribbing for putting on a Carroll College hat at the signing. Niki (Fivey) Kelly is on the nursing faculty at Montana Tech.

Williams said Avery Kelly is a model student that any college would be lucky to have.

Kelly said she is undecided on her major at Carroll.