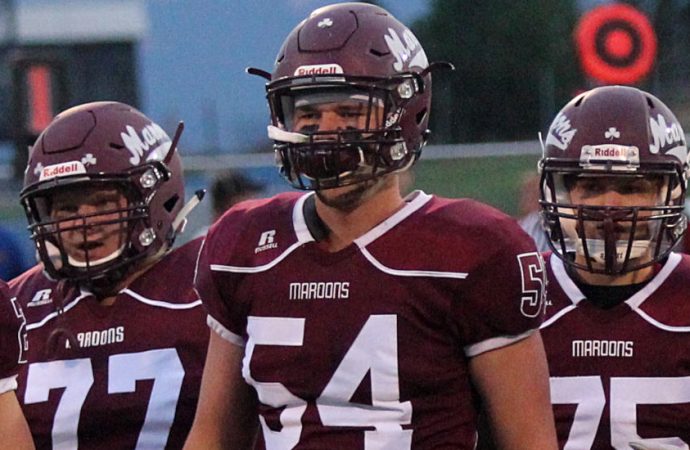 Before he went to work for Butte-Silver Bow Monday morning, Aaron Richards had an announcement he could not wait to make.

Richards had to be at work at 7 a.m., but first he went to Twitter. The soon-to-be Butte Central senior is going to be a Montana State Bobcat. He will play football for the Bobcats.

While he cannot sign until December, Richards is free to announce his commitment to the Bobcats. The school, however, cannot talk about it.

The decision, Richards said, came late last night after talking with his parents, Cyndy and Toby, and his brothers, Jonathan and Ryan.

“I was kind of talking to my parents a lot,” Richards said. “They (the MSU coaching staff) really wanted me to commit. The signing is in December now, so they kind of want to get everyone early.”

Richards will be the second of the three boys in the family to play NCAA Division I football. Jonathan Richards, a 2011 BC graduate, played for the University of Montana, though his career was cut short by a shoulder injury.

His first cousin, Aschan Richards, also a 2011 BC grad, played for the Grizzlies, too, before seeing his playing days come to an end with an injury.

Aaron Richards said he talked to the Grizzlies, along with Montana Tech, Carroll College and Rocky Mountain College. He said the Griz were definitely in play.

“I was kind of tempted,” he said. “Bozeman just felt a lot different to me. It just kind of felt where I should be.”

Having an older brother who knows the game of committing to a college team was key, Richards said.

“Having him is nice, just to talk to him about it,” Richards said of his brother Jonathan. “He’s been through all this. He knows about playing football at that level. It’s nice to have him as a reference.”

Having the commitment out of the way before his senior season for the Maroons is also a bonus for Richards.

“It’s nice getting it done,” he said. “I don’t have to worry about much in my senior season. I just have to go play.”

The 6-foot-4, 280-pound Richards said he will likely play in the trenches for the Bobcats. He said he thinks it will be on the offensive line, but defense is not out of the question.

“He told me that he’d want me to gain at least 20 pounds,” Richards said. “I think it will be good weight. It won’t be fat. Well, some of it might be fat. Most of it will be muscle.”

Richards said he was impressed with the Bobcat coaching staff, pointing to head coach Jeff Choate and B.J. Robertson, the Cats’ special teams coordinator who is also in charge of high school relations.

“I talked to him a little bit about going there, too. He reached out to me,” Richards said. “There’s a lot of nice people over there. They’ve got a lot of Montana people and a lot of people who’ve been around Montana.”

That could bode well for Richards, who has been a three-year force for the Maroons in three sports. Through three seasons at the school, Richards has nine letters — three in football, basketball and track and field. That puts him on pace for 12 letters, something that puts him in some pretty exclusive company.

“I don’t know if it’s impressive at Central,” Richards said with a laugh. “We’re a little low in numbers now.”

He said his years at BC have been flying by.

“It’s been fun. I can’t believe it’s my senior year,” Richards said. “I remember when my brother committed to the Griz. It seems like yesterday, but I’m happy.”

That happiness is the reason for that early-morning Tweet.