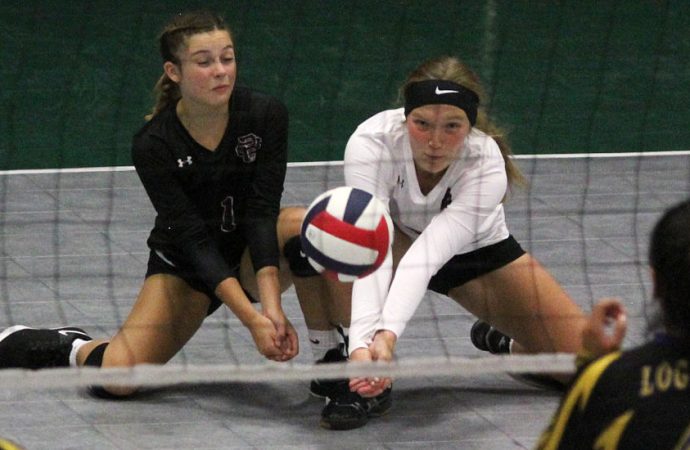 Butte Central could’ve been happy with its volleyball endeavors this weekend. The Maroons lost only twice, to state Class A power Columbia Falls on Friday in pool play and then to Libby on Saturday in placing competition.

The Maroons, however, hoped for a little more and their head coach expected it. Becky Hancock knows she has a good team under her tutelage and wants it to enjoy victors’ rewards.

“We were super inconsistent,” Hancock said after the 25-17, 25-22, 15-9 loss to Libby in what was essentially the match for third place in the Western A Conference Tip-Off Tournament held in the Butte Civic Center. (Place matches; Pool play scores)


“We were super choppy,” she continued. “It wasn’t good enough. I felt we had some good moments, but we couldn’t get the puzzle, all the pieces together. And, if we can’t, we’re going to struggle.

“It wasn’t bad, really. We were in the top four, but we didn’t end up where we’d like. 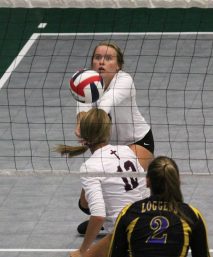 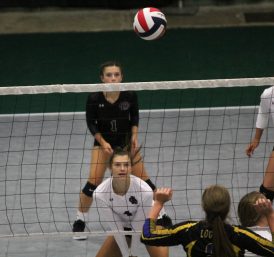 Avery Kelly of BC watches the ball after scrambling to send it over the net. (Bill Foley photo) 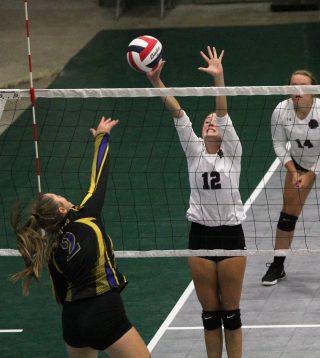 Mati McGree of BC goes up for a block as Sheyla Gallagher of Libby hits. (Bill Foley photo) 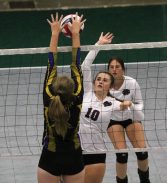 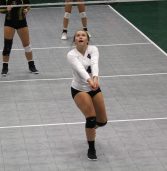 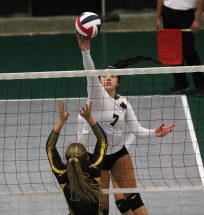 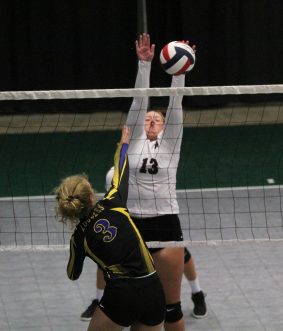 Makala Doherty of BC goes up for a block as Libby’s Ember Rode hits the ball. (Bill Foley photo)

It was top four in a difficult field, too, with long-recognized Class A volleyball dotting dotting the field.

Neither team overwhelmed the other, but the stubbornness in both stifled each other. So, Libby took the first set by opening up a gap as the Maroons failed to execute on hitting opportunities. Sheyla Gallagher fired an ace serve amid three BC errors and the Loggers led 23-15.

Ember Rode’s tip made it set point. Libby was held off a bit on an out-of-bounds hit and then when Maroons Marissa Anderson and Avery Kelly teamed on a block. McKenzie Proffitt nailed a kill and the Loggers had the first game.

Butte Central fell behind early in the second set and trailed 8-4 after Proffitt fenced up a block for Libby. The Maroons began chipping away at the deficit, though, and clawed back to a 10-all tie after Emma Keeley aced a serve and a Libby try at a setter’s dump missed wide of the stripe.

The lead went back and forth by a point or two, or was tied, until Cassidy Strizic notched set point for BC with a kill. It was 24-22 and Amira Bolton then closed the door for Butte Cental with a kill after a Strizic serve.

The tie-breaker set followed and Ashlyn Monigold served four straight points that pushed the Loggers to a 7-4 lead. Proffitt’s block and kill capped the run before Kelly ended it with a kill for the Maroons.

However, BC was not able to catch Libby again. The margin stayed tight until two Butte Central hitting errors widened the difference to 13-8. A Proffitt kill brought match point at 14-9 and then a Maroon’s return shot was too powerful and cleared the back line, ending the match.

“We beat Libby this morning in pool play,” Hancock said, “but not this afternoon. We just were not clicking. We’d have a great save in the middle and then everybody else would just be standing around. Somebody would dig up a ball for us, but then nobody would step up to execute. We have to have positive communication being loud about what to do when the ball is out of system.”

Though the team seemed to struggle, Hancock said she also saw improvement and more of it imminent.

“Maci Reopelle and Avery Kelly really stepped up with digging and blocking,” Hancock said. “Maci Reopelle is a really athletic kid, who is all over the floor digging up balls for us.”

“This was a great idea for the tournament,” Hancock said about the Civic Center venue. “Being able to use three courts at the same time and have all the matches in the same building was good, I think. I think all the coaches probably liked it, but I’m not sure they would want to have it here every year. Most would probably still like to have it at their places (on their turns in the Western A host rotation).”

Butte Central will go to Manhattan next Saturday, entering both the varsity and junior varsity teams in the Manhattan Invitational tournament.