BC looks to finish football slate with a win at Stevensville 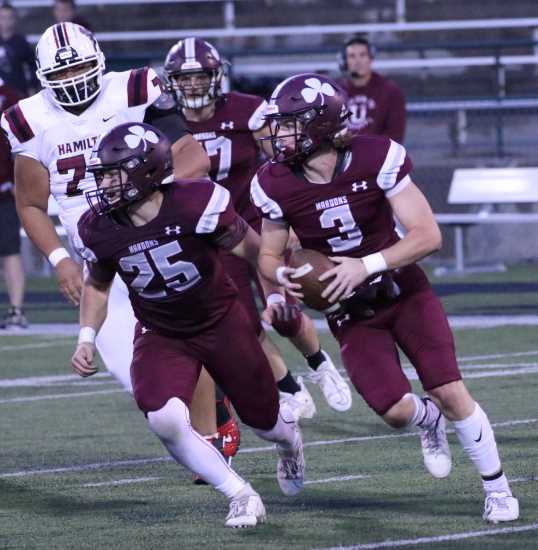 Butte Central’s football players are still wearing bandages, but maybe, now, not so many layers.

The Maroons had a week off from competition last week, giving them healing time, and will end their high school football season Friday with a 7 p.m. Western A Conference game at Stevensville.

“The week off was good,” BC head coach Don Peoples Jr. said. “It was an opportunity to heal and get recharged a little. We got back into practice and it was good for us.”

He said injured junior quarterback Jack Keeley will be back in action, but probably only on defense as  cornerback. The separated shoulder he suffered will probably keep him from throwing the ball, taking him out of the offensive lineup again. Peoples added that senior running back/linebacker Konnor Pochervina, sidelined by an ankle injury almost the whole season since hurting it in the opener, may get one last chance to play.

“Konnor will be a gametime decision,” Peoples said. “He has given an unbelievable effort to get back into playing. It says a lot about him that he is still out for the team, still doing everything he can to get back and play high school football. It sends a real message to our other kids.”

Butte Central has a 1-6 this injury-ravaged season with the mark including an 0-4 conference ledger. Stevensville is 1-7 and 0-5. The Yellowjackets haven’t had a week off in their schedule.

“Stevensville is a real challenging team,” Peoples said. “They’ve moved the ball on everyone this year. “The Beller kid is big and strong and has deceptive speed. He runs hard and they’ll throw him the ball, too. He’s a real beast on defense. He’s a challenge for everyone, so we’re concerned about him.”

Kellan Beller is a 6-foot-2, 220-pound senior running back and linebacker who leads Stevi in receiving, rushing, touchdowns and tackles.

“Every game they’ve had, he’s had big offensive plays,” Peoples said. “He’s a load to tackle, so we have to get a lot of defenders to him.”

Peoples said Stevensville runs most of the time on offense but will throw with Beller and senior tight end Hunter Gunn being the main receivers.

“But, we expect them to try to establish the run first with Beller,” Peoples said. “They have a nice offensive package.”

Senior Kyle Holter will again answer the Maroons’ call to play quarterback. He has filled in since Keeley’s injury, with senior Rye Doherty also having seen some time in the position.

“We feel like Kyle has done a great job at quarterback replacing Jack Keeley,” Peoples said. “We hope we can execute offensively better to get some points on the board.”

Misfortune seems to have sabotaged the BC efforts and promise this season.

“Losing out quarterback and the other injuries, we’ve been kind of discombobulated on offense,” the coach said. “I guess injuries are a part of the game. All six of our losses have been to playoff teams. Three or four of those teams are legitimate state championship contenders.”

Butte Central will be without senior receiver/safety Dougie Peoples, who is done with football after suffering a season-ending knee injury two weeks ago.

“We’ve worked to expand our depth,” coach Peoples said. “The JVs had a nice win on Monday.”

Many of the younger BC players have seen varsity time due to the urgent need for backups.

“I like the no-quit attitude of our athletes,” coach Peoples said. “The kids’ attitudes have stayed good and they’ve kept coming every day and working hard. The younger kids have progressed a lot, especially those playing on the line.

Dougie Peoples and junior lineman Canyon Kibler will both miss with season-ending injuries. So, probables in the lineups for Butte Central, on offense, are Ayden Durkin at center, Cayden Kibler and Dawson Rodgers at the guards, Riley Gelling and Tanner Keith at the tackles, Eric Loos at tight end, Doherty, Zane Moodry and Garrett Button at wide receivers, Doherty or Justus McGee and maybe Pochervina at running back, and Holter at quarterback. Ethan Andersch is the kicker.

The probables on defense are Cayden Kibler and Michael Peck at the tackles, Gelling and Loos at the ends, Doherty, Moodry and Bryce Keane or Pochervina at the linebackers, and Holter, McGee, Jake Tauscher and Button or Keeley in the secondary. Moodry punts.