BC girls making most of latest trip to state

Maybe it is because playing in the state tournament is old hat for the Butte Central girls’ basketball team.

The Maroons will participate in the Class A State tournament for the eighth time in nine seasons when they head to the Four Seasons Arena in Great Falls on Thursday.

Maybe it is because they relish the underdog role.

While the Maroons won the Western A Divisional tournament two weeks ago in Butte, BC still very much feels like a dark horse at best in a tournament that includes undefeated Havre, defending champion Columbia Falls and Southwestern A regular-season champion Hamilton.

Whatever the case, coach Meg Murphy’s girls are heading to state feeling loose and genuinely enjoying themselves.

“The nice thing about this group of kids is they are just having fun,” Murphy said while watching practice at the Butte Civic Center on Tuesday. “This chemistry is really unique. The kids are having fun.”

The Maroons take a 19-5 record in to their first game, which is the last battle of the first day of the tournament. BC plays Glendive (10-14) in the 8 p.m. game.

“I think it’s a pretty solid field,” Murphy said. “From our division, it was a tossup on which teams would get there.” 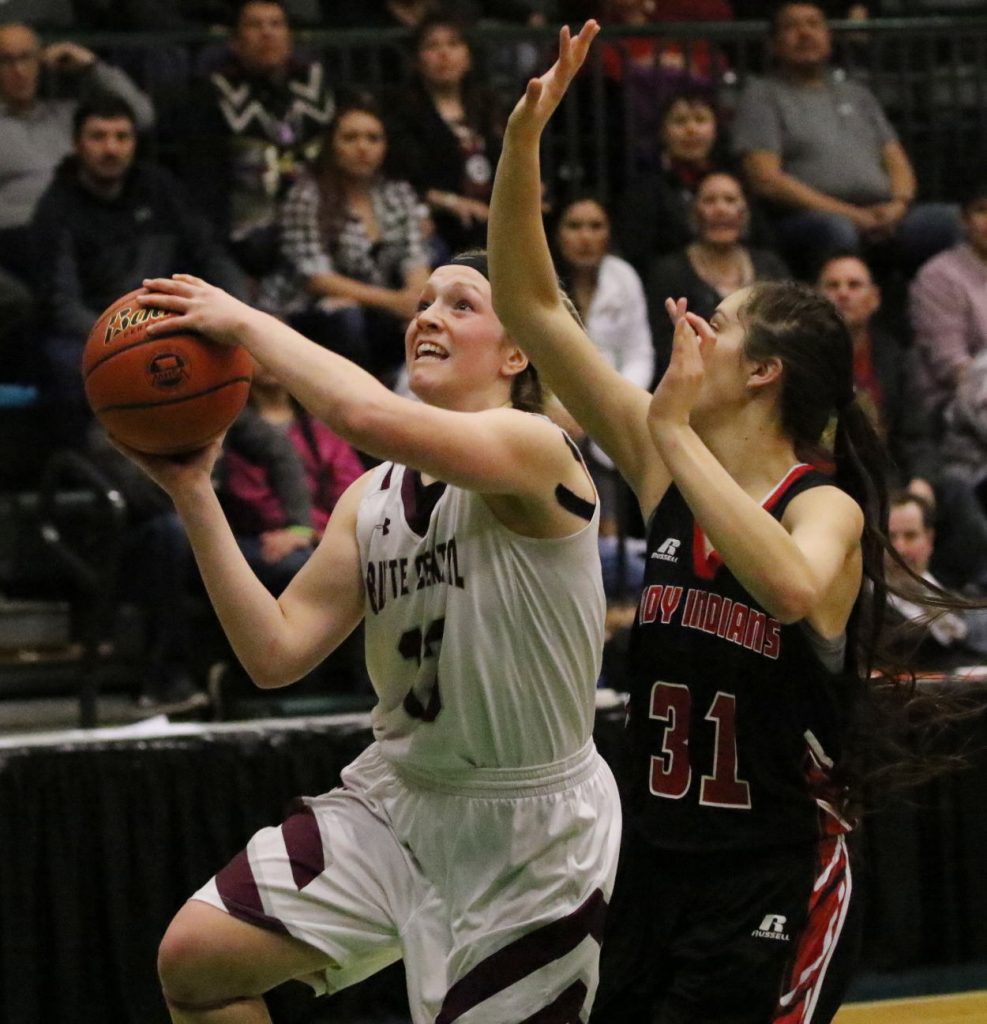 Maroon Megan Michelotti goes up for a hoop in front of Browning’s Ronnal Jordan during the Feb. 4 Western A championship game. (Butte Sports file photo)

To illustrate just how unpredictable the postseason has been, Hamilton went 10-0 in Southwestern A play during the regular season. The Broncs, though, barely survived and advanced, placing fourth in the Southwestern A District and Western A tournaments.

Browning and Glendive are the only two teams who didn’t play at the state tournament last year in Butte. Havre is making the trip for the 11th time in 12 years under coach Dustin Kraske.

Glendive is the only team with a losing record, but that doesn’t mean the Maroons have a chip shot in the opener. The Red Devils’ trip to state might be the most impressive of them all.

Including the play-in game, the Red Devils needed to win four games at the super divisional to book the trip to Great Falls. (The Eastern and Central divisions didn’t play district tournaments.)

“Glendive has nothing to lose,” Murphy said of the Red Devils, who will be making their first trip to state since they placed third at the Butte Civic Center in 2009. “They’re playing well.”

Sophomores Karsen Murphy and Savannah Toms led the Red Devils into action. Toms averaged 10.3 points and 6.9 rebounds during the regular season. Murphy, who is no relation to the BC coach, added 9.1 points and 5.1 rebounds to the Red Devil lineup.

Also, senior Jalen Wyse chipped in with 6.7 points per game.

Senior guard Kloie Thatcher is the leader of the Maroons. The senior who signed to play at Rocky Mountain College, had a divisional tournament for the ages two weeks ago.

Thatcher scored 67 points in three games to lead BC to the title. She scored 26 in the semifinals and 27 in the championship game.

For her efforts, Thatcher was unanimously selected the tournament MVP.

Thatcher hit 11 3-pointers over the three games, including several from very deep.

“I don’t think she shot inside the NBA line,” Murphy said. “I look at one time and said, ‘You’ve got to be kidding me.’ When she’s felling it, she’s feeling it.”

Michelotti averaged 11.6 points and 7.7 rebounds per game during the season.

Joyce, who is generously listed at 5-foot-3, was the key to BC’s tournament-opening win over Columbia Falls. Joyce scored 15 points and helped keep the Maroons in the game until they made an improbable comeback in the fourth quarter.

“When she’s on, she’s as fun to watch as anybody,” Murphy said of Joyce.

Bolton proved that she is one of the top defenders in the state by holding Columbia Falls star Dani Douglas to four points in the tournament opener. 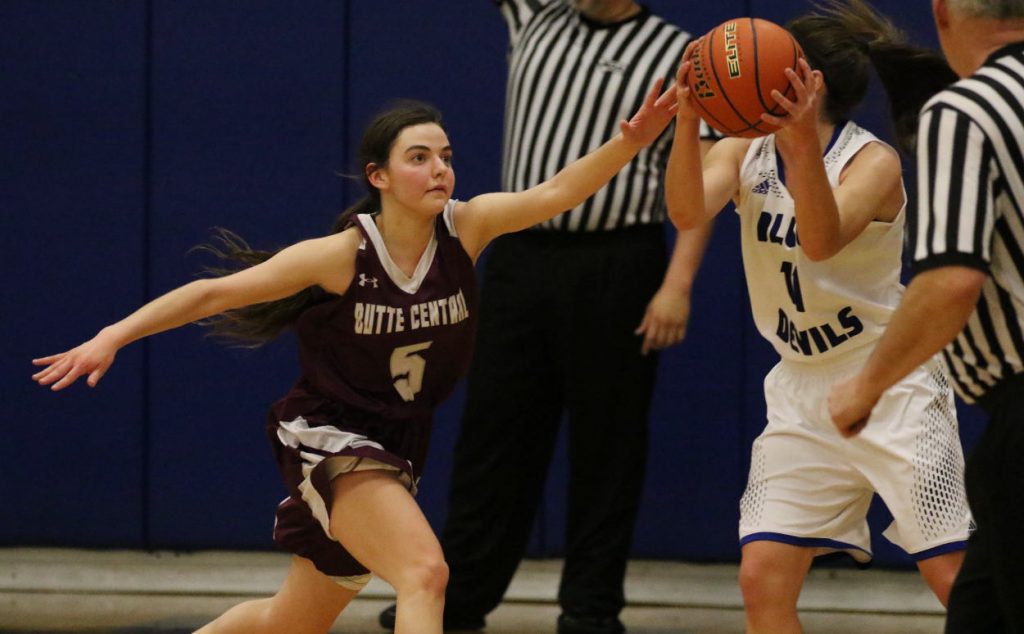 “She is just quick,” Murphy said. “Even in a zone, she anticipates well. She’s always got her hand on the ball.”

Murphy said the week off will be beneficial to Michelotti, who has been taking a beating in the post. It is also good for Kailee Murphy, the coaches daughter who has been working out the rust since returning from a knee injury that made her miss her entire junior season and the first part of the this year.

Sophomore Cassidy Strizic has been a key player for the Maroons at the post, while freshman Allyson Mueller has developed into a top defensive player off the bench. She helped spark the BC comeback over Columbia Falls.

Junior Bella Sorini, who missed most of the season following an offseason leg surgery, is questionable to play after aggravating the injury, Murphy said.

The Maroons enter the tournament winners of nine out of their last 10 games, dating back to their Feb. 2 win over Dillon. Their only loss in that stretch was to Dillon in the semifinals of the Southwestern A District tournament.

BC won its next five games following that loss. 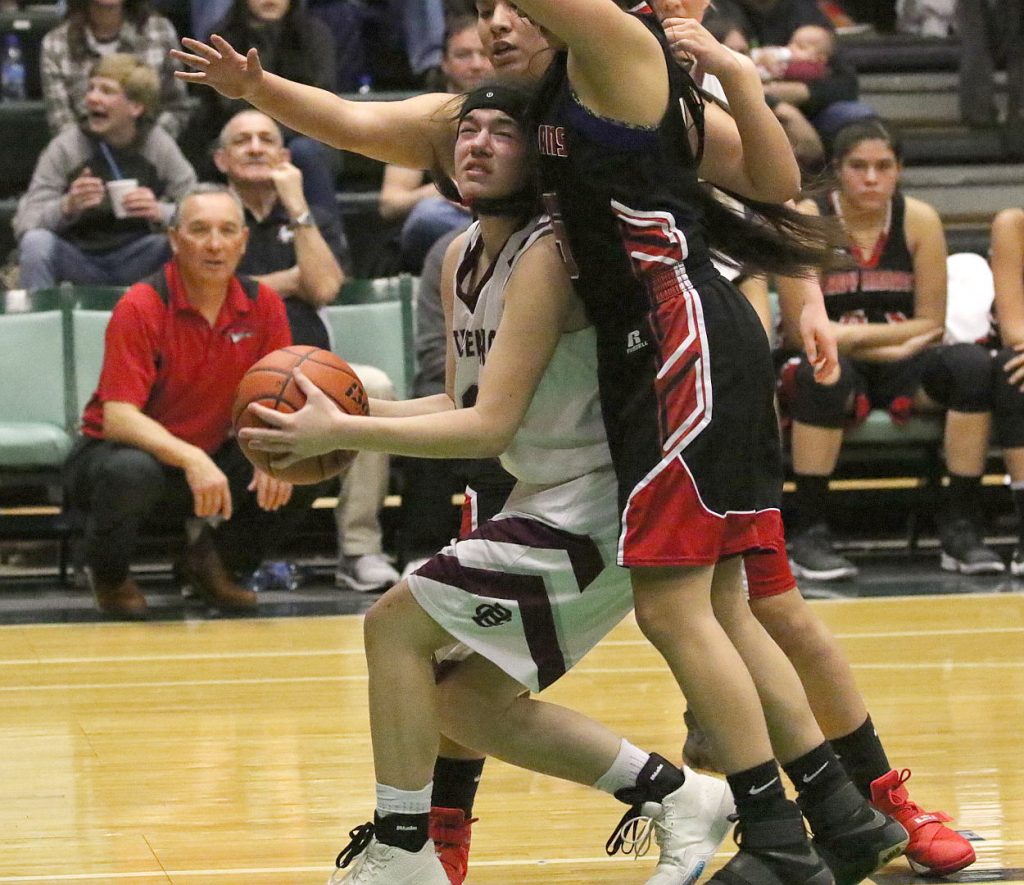 BC’s Olivia Bolton tries to score in traffic against Browning in the Western A title game. (Butte Sports file photo)

In BC’s seven trips to state since the 2010 team broke a state tournament drought dating back to the fall of 1982, the Maroons have played in four state championship games, won two titles (2011 and 2016), placed third once and fourth once. They have played on Saturday every time.

So, the Maroons have some lofty expectations to live up to as they make the trip north. If they’re nervous about that, they certainly are not showing it.

Following is a look at the other first-round games.

Havre vs. Hamilton, 12:30 p.m.
The Blue Ponies enter the game winners of every contest since falling 47-37 to Corvallis in a Saturday-morning game of last year’s state tournament in Butte.

Kyndall Keller, a 5-7 sophomore, averaged 18.1 points per game to lead the Ponies in the regular season. She tossed in 14 of her team-leading 15 points in Havre’s 42-34 win over Hardin in the Eastern A Divisional championship game.

Daniel Wallace, a 6-foot senior, added 10.0 points and 7.1 rebounds. She scored 14 points and grabbed 13 boards in the divisional title game.

The Broncs have struggled since the postseason began, going 3-4 over the district and divisional tournaments. The Broncs, though, still managed to get to the dance, so they have a shot.

Cariann Kunkel, a 5-9 senior, averaged 14.6 points to lead the way as Hamilton went 17-1 in the regular season.

Browning vs. Belgrade, 2 p.m.
With a .500 record, the Panthers are a bit of an underdog entering the tournament.

The Panthers beat Glendive 44-32 in the third-place game at the Eastern A Divisional tournament.

Gabby Webber, a 5-8 sophomore who missed time at the end of the season with a foot injury, scored 15 points to pace Belgrade in that win. She averaged 13.1 points per game during the season.

Kiah Hohenstein caught a hot hand in the divisional tournament. The 5-10 senior who averaged 11.7 points per game in the season, hit 10 3-pointers in Belgrade’s four tournament games.

Bailey Christensen, a 5-9 junior who averaged 6.9 points and 6.7 rebounds during the regular season, scored 10 points in the third-place game.

Browning enters the tournament as the No. 2 from the Western A thanks to Thatcher and the Maroons.

Skunkcap earned a first-team spot on the all-tournament team following the Western A Divisional.

Taylor Jordan, a 5-11 junior, fell just short of averaging in double figures with 9.8 points per game during the regular season.

Hardin vs. Columbia Falls
The defending champion Wildkats are looking for their third straight trip to the state championship game. First they must make it past a tough Bulldog squad in the opener.

Hardin collected 33 steals in the first two games of the divisional tournament. They only stole the ball four times in the title-game loss to Havre, however.

Karissa DuShane, a 5-4 senior, averaged 17.3 points per game to lead the Bulldogs to a 14-3 regular-season record. Classmate Sharmayne Hardy tossed in 10.4 points per game.

Marie Five, a 6-foot sophomore who averaged 8.8 points during the season, scored 13 points to lead the Bulldogs in the title game.

Columbia Falls saw seniors Dani Douglas and Hannah Gedlaman scored 11 points as the Wildkats edged Hamilton 43-42 in overtime for third place at the Western A.

Douglas tossed in 11.8 points per game.