BC girls look to rise from the unknown … again 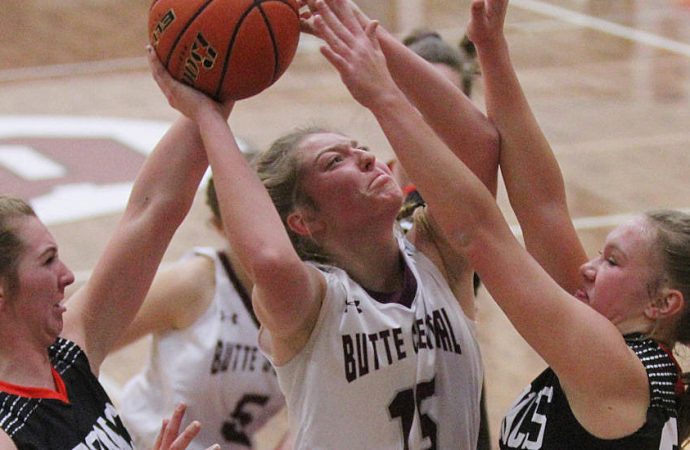 Butte Central’s girls’ basketball team is going to open the season much like it did last December.

The Maroons will be a relative unknown, even to themselves, as they head to Frenchtown Friday to play in the Western A Tipoff tournament.

If they finish off this season anywhere near last year, however, BC fans are in for a real treat.

About nine months after the Maroons made an improbable run to the Class A State tournament in Great Falls, BC takes on Whitefish at 3 p.m. Friday at the Frenchtown Middle School gym. BC plays Ronan at 5:30 p.m. Saturday at Frenchtown High School. (Complete schedule)

“It’s just a matter of how much they progress,” longtime BC coach Meg Murphy said while watching Monday night’s practice at the Maroon Activities Center.

This season, the coach said she has a handful of candidates to make similar rises during the 2019-20 campaign. Murphy said BC’s success depends upon players making that jump.

“We don’t know who the starters will be,” Murphy said. “We’re tossed up right now.”

Murphy pointed to Kelly and Emma Keeley as players to watch.

“I can’t help but think that she grew up and matured in volleyball,” Murphy said of the 5-foot-10 Kelly. “She’s just a pure athlete. She’s going to be a kid who will surprise.”

Murphy pointed out that Kelly is a better shooter than her father, BC boys’ coach Brodie Kelly. She also said the younger Kelly will be a force inside.

“She’s going to allow us to do a lot of things defensively,” Murphy said.

Emma Keeley has been a contributor for BC since her freshman season. This year, Murphy said she is in the best shape of her career after the Maroons made a run to state in volleyball.

“That’s been a huge difference for her,” the coach said. “Keeley is going to have a good year.”

With 14 players — one more than last year — the Maroons will play a junior varsity and varsity schedule. They do not have enough players for a freshman game.

Murphy, though, pointed to a silver lining of having small numbers. Last season, the entire Maroon roster was battled tested as BC won the Southwestern A District tournament before placing fourth at the Western A Divisional tournament.

“Those kids getting to play a lot of quarters and a lot of minutes really paid off in the end,” Murphy said. “So, there’s a positive and negative to the low numbers. Nobody complains about playing time.”

The Maroons will play six games before the Christmas break. BC will play host to Belgrade on Dec. 13. After games at Southwestern A Frenchtown and Stevensville Dec. 20 and 21, the Maroons will take on Butte High Dec. 23 at the Butte Civic Center.

BC will be back in action Jan. 4 at home against Hamilton.

Instead of a district tournament, the Western A teams will play divisional play-in games for the right to play in the Western A Divisional, which is Feb. 27-29 in Ronan.

The Class A State tournament is March 12-14 in Billings.