BC girls edge Frenchtown to win Southwestern A title 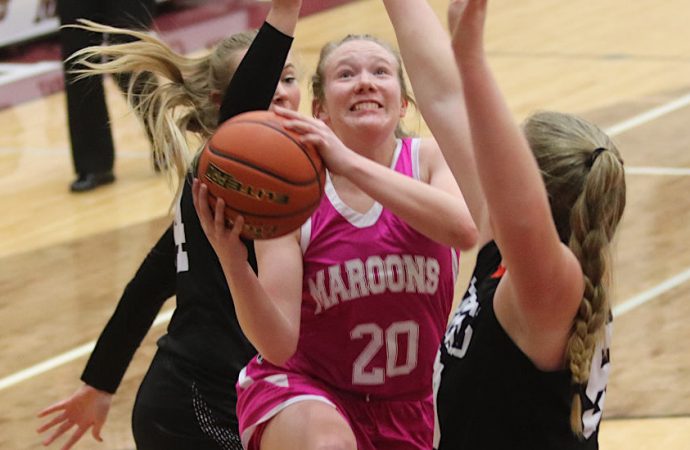 It was one of those plays that every kid with a basketball dreams about.

Butte Central sophomore Brooke Badovinac hit a 15-foot jumper with 3 seconds left Saturday, and the Maroons won the Southwestern A conference title with a 38-36 win over Frenchtown at the Maroon Activities Center.

The win caps an amazing turnaround for the Maroons, who went 1-18 and missed out on the divisional tournament a year ago. Central will open the Western A Divisional at 7 p.m. Thursday at the MAC as the No. 1 seed from the Southwestern A.

That confidence evident as the Maroons played for the final shoot over the final minute of the back-and-forth game. Central called timeout with 55.9 seconds on the clock. The Maroons stalled until 17.4 seconds left before calling another timeout.

BC called one last time out with 11 ticks on the clock.

Badovinac took the in bounds pass. She approached the hoop and looked for junior Sofee Thatcher, who was grabbed by a Frenchtown defender.

So, Badovinac dribbled up and sank a shot from the free throw line.

“It was a play for Sofee back door,” Badovinac said. “She wasn’t open, and I decided to take it.”

Maroon Maddi Kump gets off a shot over Sadie Smith of Frenchtown. (Bill Foley photo)

BC coach Meg Murphy said that play is usually run with Thatcher controlling the ball.

“Sof didn’t want it,” Murphy said, referring to BC’s timeout huddle. “She said, ‘I run it wrong all the time.’ I said, ‘Brooke, can you take it?’ She didn’t know what she was doing, but whatever she did, it worked.

“You can’t ask for a better kid with the ball in her hand,” Murphy added of Badovinac. “She shoots the ball well.”

The Maroons celebrated the shot, but there was 2.6 seconds put on the clock after the Broncs called a quick time out.

The Broncs got an inbound pass to Demi Smith at about half court. Smith got off a desperation shot that was off the mark, and the Maroons celebrated on the court.

“I’m just so proud of these kids,” Murphy said. “We were 1-18 last year. To come back and win a conference championship is just … amazing.”

The victory snapped a three-game losing streak for the Maroons, who dropped road games at Corvallis, Livingston and Hamilton.

The Maroons close the regular season at 11-4 overall and 7-3 in conference play. Central would have been the No. 2 seed and had an automatic bid had they lost to the Broncs. Murphy knew that, but the coach did not tell her players.

Central entered the game thinking they needed to win to avoid a Monday play-in game, a fate that now awaits Frenchtown.

The victory was in doubt much of the game.

Central led 12-9 after the first quarter and 20-17 at halftime after Frenchtown’s Maddy Eggers scored 1 second before the break.

Like it was much of Friday’s loss at Hamilton, the Maroon offense went cold in the third quarter. A 3-pointer by senior Delaney Hasquet was the only field goal of the stanza for the Maroons.

Hasquet’s three could not have come at a better time, however.

The Broncs scored seven straight points, capped by a put back 6-foot-2 freshman Sadie Smith with 4:26 left in the third, to put the Broncs up 24-21. Hasquet’s trey tied the game at 24 with 4:13 on the clock, and it was the last basket by either side until Lauren Demmons hit a baseline jumper for a 26-24 Frenchtown lead as time expired in the third quarter.

A Demi Smith free throw extended the lead to 27-24 early in the fourth quarter. But Hasquet and Badovinac scored to give the Maroons the lead at 28.

After another Demi Smith free throw, BC took a 32-28 lead on hoops by senior Madi Kump and a put back by Badovinac.

Another Badovinac put back and two Hasquet free throws, set up by a nice Badovinac pass, put the Maroons on top 36-31.

Sadie Smith hit two free tosses, and Demmons tossed in a bucket before Demmons hit one of two free throws to tie the game at 36 with 1:08 left.

Murphy pointed out that the game-winning shot — a shot reminiscent of Ryan Murphy’s buzzer-beater that sent the BC boys to the 1990 Class A state title game in Bozeman — came as the Maroons wore pink uniforms in honor of ‘Cancer Schmancer Night.’

That is a phrase coined by the late Mairissa Peoples, whom the Maroons honor every year on the special night.

“We must have had a little Mairissa Peoples in us tonight,” Murphy said.

Hasquet led the Maroons in scoring with 11 points. Badovinac scored eight of her 10 in the fourth quarter. Thatcher and Kump each finished with eight points in the win. Senior Taylor Harrington tossed in one.

Seniors Avery Kelly and Amira Bolton and junior Brenna Foley also contributed for the Maroons, who were playing without injured freshman Ella Moodry.

Murphy, who is in her 14th year of her second stint as BC’s head coach, marveled at the accomplishment of her team.

“Our conference is pretty equal. It’s just on a given night,” the coach said. “We talked about it at the beginning of the season. You’ve got to win home games and pick up a couple on the road. They did exactly what they need to do.

“These kids had a lot of grit tonight. I’m proud of them,” Murphy added. “They work hard. They never give up, and they’re just scrappy all the time.”