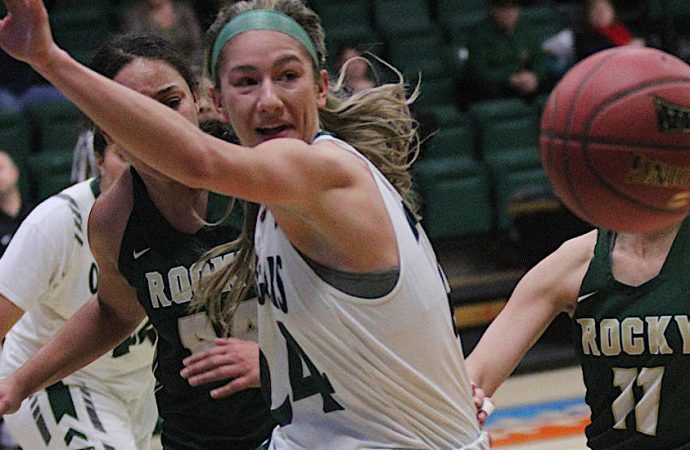 The Orediggers lost 63-52 to 20th-ranked Rocky Mountain Thursday night in a Frontier Conference college women’s basketball game. It was Montana Tech’s fifth straight loss and marked the third time in the stretch the Orediggers carried a lead into the fourth quarter before falling short. (Stats)


“In our last three games, it’s been the same thing,” Montana Tech head coach Carly Sanon said. “We play really well and confident for 37 minutes and then stumble the last three minutes.”

The Oredigger lead was a thin 37-35 going into the final period, but had been five or six points for much of the way until then. They overcame a 6-0 Rocky Mountain spurt to scored nine in a row and hold an 11-8 edge through one quarter.

Montana Tech relinquished the early lead to Destinee Pointer’s personal seven-point run in the middle of the second quarter, but regained it with a 7-0 spree of its own. The Oredigger clung to a 23-19 edge at halftime.

Rocky guard Kloie Thatcher calls out a play as she takes the ball down court. (Bill Foley photo)

“We haven’t been finishing games,” Sanon said. “Every team in our league is ranked in the top 30, top 27. It’s just a matter of us continuing to believe. We have great young women who work hard and are fighters. And, we’ll keep fighting. We’ll get over it.”

Montana Tech had a 45-40 lead after Kaylee Zard stuck home a rebound with 7 minutes, 15 seconds left in the game. Markaela Francis scored for the Bears, but Mesa Williams answered with two free throws for the Orediggers.

Rocky Mountain, though, with Butte Central alum Kloie Thatcher running the point, went on a 12-1 blitz over the next four minutes to frustrate the Montana Tech endeavors.

Pointer started the decisive run with a basket off a pass from Francis. Then, Francis canned a shot after a pass from Thatcher. Zard sank one of two charity tosses for Montana Tech and then the Bears took off on a 10-0 spree. Antuanisha Wright keyed the surge with a 3-point shot after Pointer’s baseline drive gave Rocky Mountain the lead, 50-48. Thatcher netted a freebie and then Wright maneuvered a steal and layin. The burst opened a 56-48 Bears command with only 48 seconds in the game.

The Orediggers were forced to foul the Bears, hoping for missed free throws they could rebound for possessions. Thatcher was 4-for-4 in the stretch and Pointer was 3-for-4 as Rocky Mountain put the win away. Montana Tech was unable to execute for points, but for a Williams drive to the hoop with 14 seconds to, in the waning moments.

Sanon tabbed Francis and Pointer as Bears who hurt the Orediggers the most. Francis, a 6-foot senior from Great Falls, finished with 20 points and 12 rebounds. Pointer, a 5-8 junior from Waxahachie, Texas, came off the bench to register 20 points as her team improved to 13-5 for the season, 4-3 in conference games. Thatcher had 11 points, four assists and two steals.

“We changed up our defenses between man and zone and that helped keep (Thatcher) and them out of rhythm,” Sanon said about the several stretches in which her team played well against the ranked opponent.

A three-point loss and a two-point defeat for Montana Tech preceded the Thursday game against Rocky Mountain, Sanon noted.

The loss put the Orediggers at 1-6 in the Frontier and 11-8 for the season going into a home 5:30 p.m. game against Montana Western on Saturday.

Sanon said having a game to play so quickly after Thursday is important in ridding the Montana Tech team’s memory of Thursday’s loss.

“After our Northern loss (last Saturday), in a tough overtime game, we had a lot more time think about it,” she said. “It’ll be nice to go over what we did wrong in this game, then put this one away and get ready to go.”

Williams finished with 20 points to lead the Montana Tech production. Her steady effort and the 14 rebounds pulled down by freshman Tavia Rooney were, Sanon said, the main positives drawn from the Orediggers’ performance.