Baseball legend Jim Hanley passes at the age of 90

Lester was playing third base for the Butte Miners. Then 18, Lester fielded a ball that should have put the bow on a one-run Butte win in Helena.

“I caught an easy ground ball, but then made the worst throw in Miners’ history to first base,” Lester remembers. “The ball ended up down the right field line.  Helena scored two runs and walked off with the win.”

Lester took the loss hard. He was beating himself up after the costly error. Hanley, the former coach of the Miners who moved on to manager of the Butte American Legion baseball program, was the team’s bus driver.

“A few minutes later, I was in the parking lot half angry and half crying,” Lester said. “Fonz came out to talk to me. I told him I lost the game for the team.  He had a great line.  He said, ‘Eddie, one single play never wins or loses a baseball game. There’re always few others that had an impact too.’ Then he added, ‘I will say that last play you made sure as hell didn’t help us.’”

It was typical Hanley. A pat on the back that came with a kick in the behind.

Then, Hanley spoke words that Lester said he still lives by today.

“He closed by telling me that there might have been a million baseball games played that day and somebody lost every damn one of them,” Lester said. “He said the great thing about baseball is that we were getting on the bus and had another chance to make plays tomorrow.  He said, “That’s how life is. You make mistakes along the way, but you keep getting on the bus and going to the next game because it’s the next play that counts.

“A lot of wisdom came from that one play,” Lester said. “You think about it, you make mistakes your whole life. You’ve got to move on to the next day. The next play is the one that matters.”

After 90 years of getting on that bus, Hanley passed away Saturday.

Called “Fonz” because one of his players thought he was as cool as the character on “Happy Days,” Hanley was a tough-as-nails, often fouled-mouth baseball guy, bus driver, county worker, bartender and family man.

For decades, Hanley helped make sure that American Legion baseball was an option for the boys of Butte. Along with the late Jack Cavanaugh and Jack Whelan, Hanley is on of the “legends” in 3 Legends Stadium, the crown jewel of a ballpark that opened at Copper Mountain Park in 2017.

Like Cavanaugh and Whelan, Hanley devoted much of his life to American Legion baseball.

Fittingly, Hanley left the world excited about the news of the Butte Miners’ wins at the Class A State tournament in Belgrade and the Northwest Class A Regional tournament in Vernal, Utah.

The day after the Miners captured the regional crown last week, the team bus stopped by his assisted living facility so the players and coaches could tip their caps to one of the godfathers of baseball in Butte.

Joe McGuinn, the youngest of Hanley’s mixture of 10 biological and step-children, was with Hanley when the Miners stopped by.

“I kept telling him about the Miners,” McGuinn said. “He got to where he wasn’t even talking much. The last coherent thing he said was when I told him the Miners just won the regional championship. He said, ‘Oh, that’s great.’”

Family members moved Hanley’s bed to near the window so he could see the Butte players, who unveiled the regional banner before holding the hats up high in respect for Hanley.

“I was hoping he was up enough,” McGuinn said. “Sure enough, he turned and waived to them. It was such a Butte thing for that to happen. It wouldn’t happen in any other city.”

Hanley never won a state title in his many years as coach and manager of the Miners, but he was at the heart of Butte’s 1949 crown. He played catcher and batted cleanup for Butte, scoring five runs in Butte’s 17-5 win over Great Falls in the state championship game.

After playing for the Dons, he was part of the Brooklyn Dodgers organization, playing in Santa Barbara

He was also a star in the Butte Copper League. Hanley was a catcher for the Miners Union team, helping the club win titles in 1951, 1953 and 1954. He was chosen as a league all-star many times and competed against many barnstorming teams who came to Butte to face the best of the Copper League.

Hanley was called to the Army in 1954, where he also played baseball. Before he left town, though, he developed a reputation for coming through in the clutch.

A review of clippings in The Montana Standard reveals a two-out, walk-off grand slam by Hanley as the Butte club beat Missoula 14-10. Another tells of a two-run triple in the ninth that gave the Miners Union team a 5-4 win over the McQueen Club at Clark Park.

One Standard story called Hanley “a fine backstopper and a handy man with the wood when runs really counted.”

After working as an umpire, Hanley took over as the coach of the Butte Miners in 1974. He was with the program for nearly the rest of his life, going back and forth from the press box to the dugout several times.

He worked as coach, the manager of the program, grounds keeper, public address announcer, ball shagger, security guard. You name, and Hanley worked it for the Butte Miners and Butte Muckers.

“We raised a lot of money and did what it took,” Hanley said after the passing of Whelan in November of 2020. “Our lives revolved around the Legion.”

For his work on and off the field, Hanley was inducted into the Butte Sports Hall of Fame alongside his daughter, Shawna, in 2003. 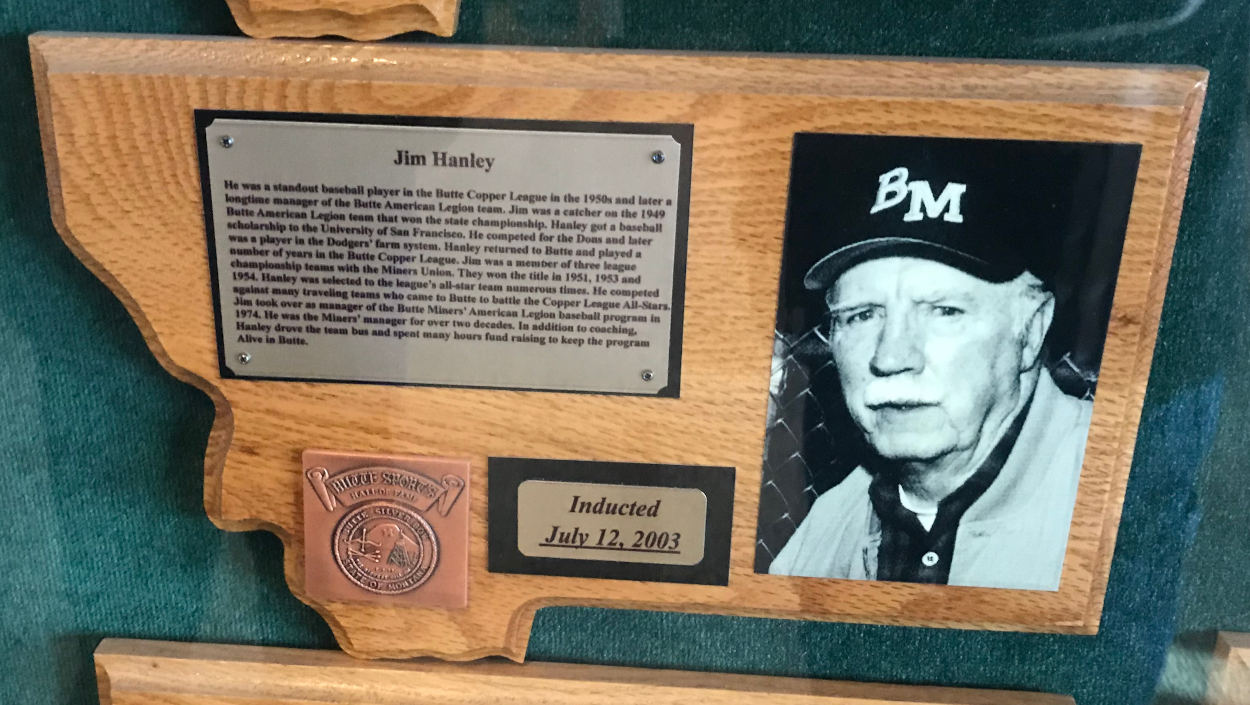 McGuinn was a young boy when his mother, Sharon, married Hanley.

“I needed him when he came into my life, for sure,” McGuinn said. “I didn’t have a dad, and he filled that void perfectly.”

McGuinn did not come from a sports family, but he was introduced to baseball by Hanley, who coached him when he played Legion ball.

McGuinn remembers pitching a game in Kalispell one year. That’s when he had an encounter with Hanley that he said would only be possible between a father and a son.

“All I have to do is get three outs and we 10 runned them,” McGuinn said. “I was a bit of a headcase. I walked the first kid. I’m on the mound, freaking out, pissed off and slamming my glove.”

With that, Hanley walked to the mound and motioned for McGuinn to give him the ball.

Then Hanley slammed the ball into McGuinn’s mitt. “He says, ‘Throw some (bleeping) strikes.’ and he rabbit punches me right in the stomach.”

McGuinn regrouped and got the final outs of the Miners win.

“We’re getting on the bus and my mom said, ‘That was a good game. Did Jim punch you on the mound.’ I said, ‘He sure did.’

“I had it coming. I needed to be punched in the stomach. It knocked me back to reality.”

It was part of Hanley’s tough-love, old-school approach to the game.

“Whenever a catcher got crossed up by a pitcher, he’d tell the catcher to go out and punch him in the face,” Lester said with a laugh.

By the time he pitched in Legion baseball, McGuinn was used to Hanley and his notorious four-letter words.

Hanley was known for swearing on the field and swearing in the press box, though never when the microphone was on.

“He’s says, ‘Jesus Christ, God damnit, that’s a good looking kid,” McGuinn said. “I about fell over laughing. It was so funny. My wife looked at me and just cracked up. That was a complement from a Butte guy.”

Later, it was Owen who got Hanley to 3 Legends Stadium one last time. On May 15, Hanley sat in his wheelchair between the stands and the dugout on the third base side to watch Owen play for the Missoula Mavericks in a doubleheader loss to the Miners.

Hanley, who lost his wife to an illness in 2017, was recognized by the announcer and received a huge ovation from the fans of both teams.

“He didn’t like going anywhere,” McGuinn said. “He didn’t like being seen in that wheelchair. But he was really, really happy that I brought him to that game. On the way home, he said, “Well hell, that wasn’t that bad being in that chair.”

Hanley also made an appearance at the park in July of 2021 as the Miners said goodbye to Whelan before a game.

“We had a great history together,” Hanley said after Whelan died. “I enjoyed every bit of it. It was a lot of fun.” 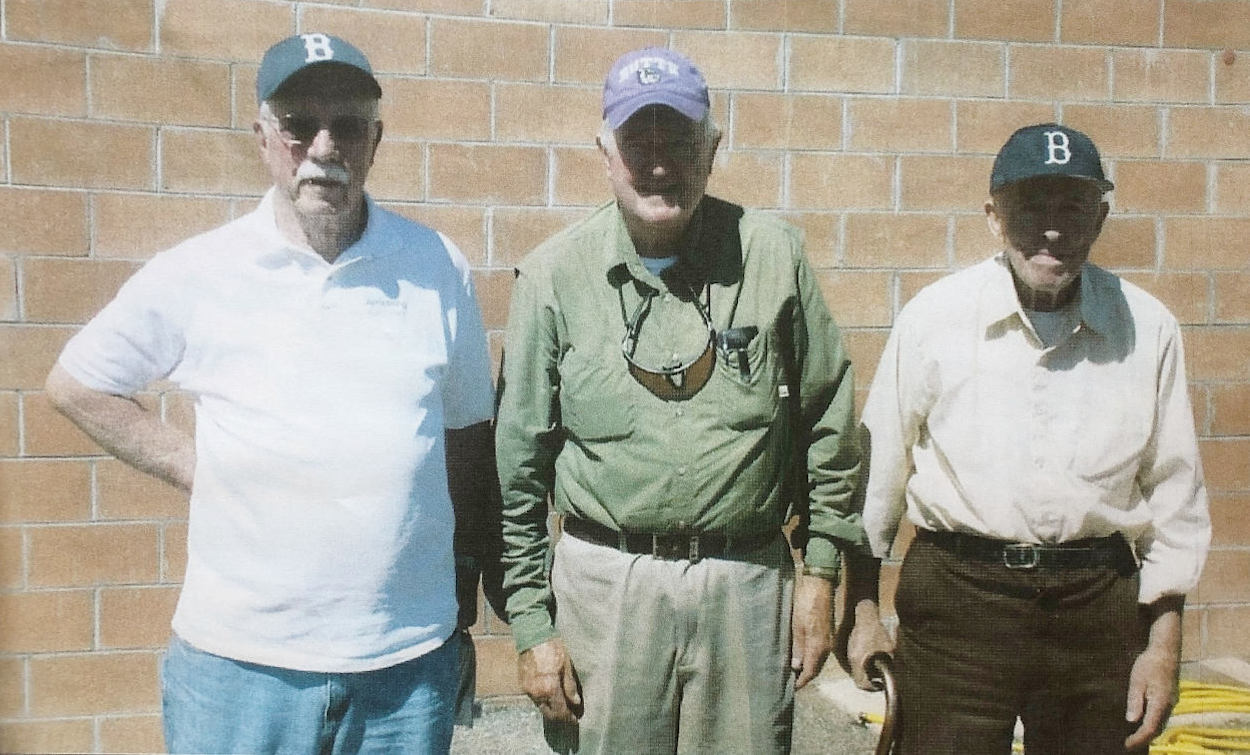 The “legends” of 3 Legends Stadium are shown in this photo. They are, from left, Jim Hanley, Jack Whelan and Jack Cavanaugh.

‘It’s your own fault’

Years after his playing days, Lester was hired to coach the Butte Muckers, the younger of Butte’s two Legion teams.

Again, Hanley had some great words of advice.

“Then he added, ‘If you end up getting canned, at least you made the calls and it’s your own fault.’”

It was typical Hanley. A pat on the back that came with a kick in the behind. So often, his words of wisdom were accompanied by some hard-hitting truth. Hanley was never one to sugarcoat.

When Lester played, the song “Centerfield” by John Fogerty was hugely popular. Lester remembers singing the song on the team bus, belting out the words “Put me in coach.”

When Hanley caught the Miners-Mavericks game in May, Lester reminded him of that song. Hanley remembered it.

After the passing of his step-father, McGuinn and his siblings have been doing some research on Hanley. They have been learning some things about his past playing days that they did not know. Some are surprising, while others are not.

They just knew the man who everyone seemed to like.

Whether it was as a bartender, bus driver or coach, so many people have gotten the best of Hanley. The current Miners, on the other hand, are too young to know the legend who spent the last few years of his life in assisted living.

Still, they paid respect in a way that meant so much more than they probably even know.

“My son knew,” said Lester, whose son Egan was a super senior on the 2022 Miners. “I told him who Fonz was and how much he meant to me. When you look at all he did for the Miners, it was awesome to have them go out there and do that.”

For Lester, it was a fitting tribute with some storybook timing for a man who gave a lifetime of wisdom with some simple, comforting words after a tough loss.

Funeral services will be held at 11 a.m. on Saturday, Aug. 20 at St. Ann’s Church in Butte. Visitation will take place starting at 10 a.m., and a reception will follow at the Knights of Columbus Hall. 5 comments