Ryan Dennehy wasn’t exactly looking forward to a career in metallurgy, so Jeff Brabant’s call couldn’t have come at a better time.

The Miles City Community College baseball coach came calling during spring break in 2016. He wanted Dennehy to play the Pioneers.

“I though playing baseball sounded better for me than doing metallurgy,” Dennehy, now 32, said.

Dennehy accepted the offer to play for the Pioneers, and it was clearly the right move. It started the Butte native down the long and winding path to him eventually becoming an physical therapist in Fargo, North Dakota.

It also led to Dennehy playing baseball at MSU-Billings.

Finally, it led to Dennehy’s enshrinement into the Pioneer Hall of Fame, where he will go down as one of the immortals Miles Community College program.

Dennehy was inducted into the Hall with Helena’s Tanner Swanby during Alumni Weekend in September.

“It was a great honor,” Dennehy said. “It was great to join the ranks of Kody Kennedy and Ryan Pollock. They were inducted before me.”

Like Dennehy, Kennedy and Pollock were Butte High Bulldogs, Butte Miners and Butte Muckers before their stellar careers in Miles City.

During the induction, Dennehy was presented a Hall of Fame figurine made by Rob Brown at Big Sky Customs in Great Falls. 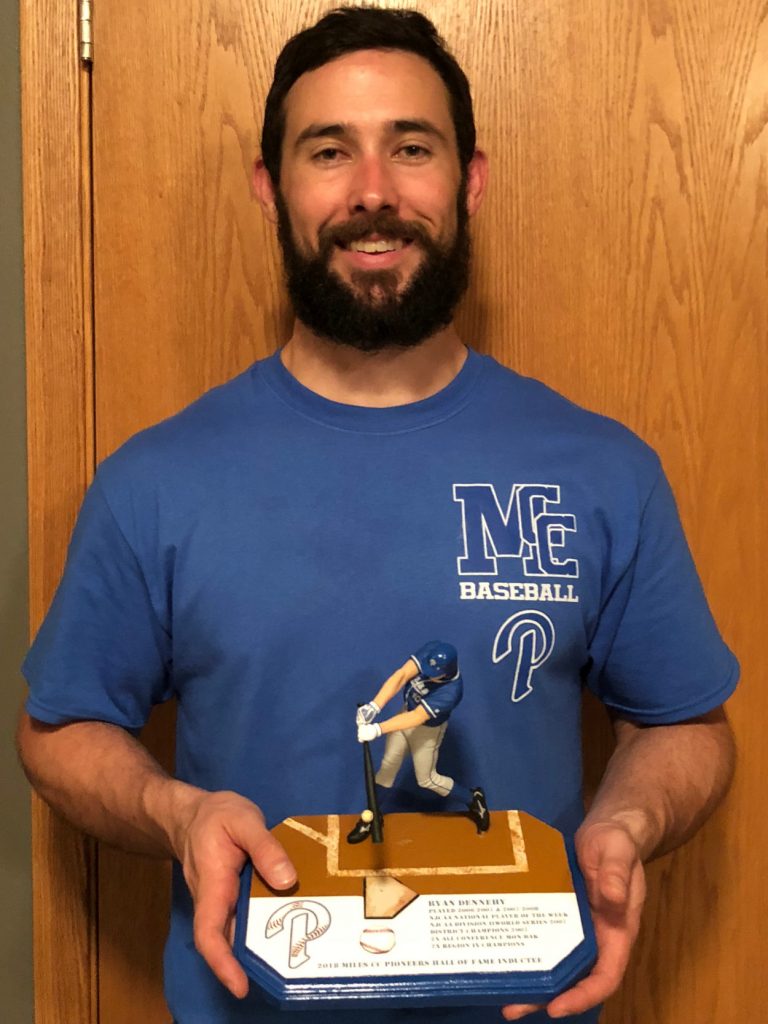 Dennehy shows off his Hall of Fame figurine. (Courtesy photo)

“It was a great weekend all around,” Dennehy said of Alumni Weekend, which featured a golfing event and a doubleheader against the current Pioneers. “I had a good experience in Miles City, baseball wise. It was awesome.”

Dennehy, who went to Kennedy Elementary and East Middle School, graduated from Butte High in 2005. He was a first-team all-conference and second-team All-State defensive back on the Butte High football team. He also competed on the Butte High boys’ track team that placed second in the 2005 Class AA State meet in Bozeman.

Along with Nick Haynes, David Schelin and Aaron Merrick, Dennehy ran a leg of the state champion Bulldog 400-meter relay team that year. They won the race in 43.08 seconds.

“We had a pretty good run,” Dennehy said of Butte High’s team that year. The Bulldogs finished 13 points behind champion Helena High.

Dennehy, who also competed in high school hockey, played for the Class A Butte Muckers under coach Glen Granger before moving on to play two years for the Class AA Butte Miners under head coach Mike Anderson and assistant Ryan Stosich.

After a very short stint playing fall baseball ball in 2005 at a community college in Phoenix, Dennehy came back to Butte. He went to Montana Tech for the spring semester before heading to Miles City to play two years for the Pioneers.

At Miles Community College, Dennehy, a left-handed hitter who played left field, was named all-conference and All-Region IX. He was named the NJCAA National Player of the Week, and he played on teams that won the Mon-Dak Conference title and Region IX championship two times.

In the spring of 2007, Dennehy and the Pioneers advanced to the Junior College World Series in Millington, Tennessee.

“We played pretty well, but we lost both games by a run,” Dennehy said. “That first year I would have put our team up against just about anybody.”

From Miles City, Dennehy went to MSU-Billings, where he spent two years on the Yellowjackets baseball team, playing left and center field. He missed most of one of those seasons with an elbow injury. 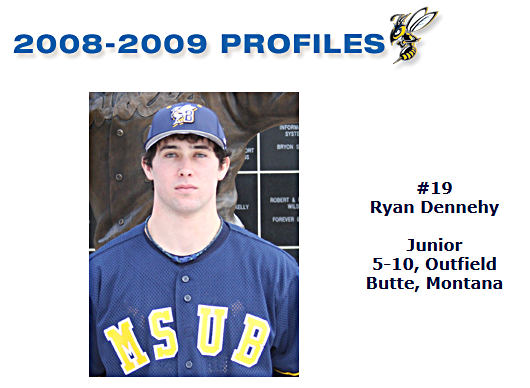 He was not granted an extra season following the injury. The semester he spent at Montana Tech came back to hurt Dennehy, though he was happy with his college career.

He especially enjoyed his time in Miles City.

“It was a lot of fun,” Denney said. “Some of my best baseball memories are playing there. I had a good time with the high school boys, too.”

Dennehy’s mother, Sue, still lives in the Mining City. His father, the well-known Bob “Bubba” Dennehy, was tragically killed in an automobile accident at the age of 49 when Ryan was 16 in 2002.

Dennehy has a large extended family still living in Butte. That includes his uncle Mick Dennehy, the former head football coach at the University of Montana.

Ryan Dennehy currently works as a physical therapist at Stanford Health System in Fargo, where he has a puppy and a girlfriend.

“I’d move back to Montana tomorrow if I could,” said Dennehy, who finished physical therapy school at the University of Jamestown in 2014.

His new career is a rewarding one, Dennehy said.

“I’m enjoying it so far,” Dennehy said of his profession. “I like that I get to work with people.”

His career is also one that Dennehy might not have stumbled upon if he didn’t get that call to play baseball at Miles Community College.

“I’m going to have to like it for the rest of my life,” Dennehy said with a laugh. “I’ve got a lot of student loans to pay off.”