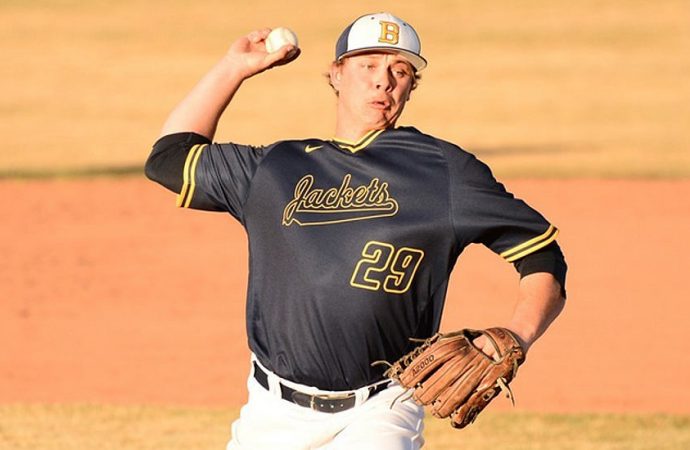 PORTLAND, Ore. — MSU-Billings senior Bryon Baker sealed a 3-1 series win for the Montana State University Billings baseball team on Sunday, and has been selected as the Great Northwest Athletic Conference Pitcher of the Week announced the conference office Monday.

Baker, who is from Butte, took the ball after an 8-4 loss by the ‘Jackets in Game 1, and threw seven dominant innings with a career-high seven strikeouts to lead MSUB to a 5-1 victory.

“It was good to see Bryon bounce back, and he pounded the zone,” said MSUB head coach Aaron Sutton. “He had all three pitches and he was ahead of hitters the whole day. That’s a good recipe for success. Anytime he gets on the mound, our team believes we are going to win, and he carries a quiet confidence about himself.”

The senior’s other complete game came in his freshman year in 2014 against Northwest Nazarene, which also marked his previous career high of six strikeouts.

This is the first career weekly honor for Baker, who is in his fourth season pitching for the ‘Jackets. It is the fourth Player of the Week award for MSUB overall this season, as fellow seniors Casey Merrit and Zach Robinson each earned Player of the Week for offensive achievements, and freshman Sam Muskat earned Pitcher of the Week as well.

The Yellowjackets make their 2017 home debut this weekend, hosting Concordia University in a four-game series at Dehler Park. Doubleheaders are set for 1 p.m. on Saturday and Sunday.