Brooke Badovinac, pictured with her family: left to right, her father Brett, sister Kodee and her Mother Amanda on signing day.

Butte, MT.– The hometown girl is staying home ladies and gentlemen! That’s right Butte, Brooke Badovinac signed her letter of intent to play hoops for another four years in the Mining City for head coach Jeff Graham and the Lady Orediggers.

The signing became official Wednesday in the Rotunda at Butte Central High School. 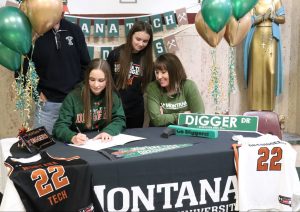 Coach Graham was ecstatic to sign the Butte native: “We are very fortunate and lucky to have such a skilled and talented player like Brooke, we are really excited for our future with her.” Said Graham. He went on to say, “When I took this job it was very important to me to make sure we keep the best Butte players together in Butte for as long as we can.”

Not only is Tech getting a good player, but they are also getting one of the most prolific scorers in Lady Maroon history. Her junior campaign was one for the books as she slashed scoring records left and right.

Brooke was torching defenses on a nightly basis; she is also a great facilitator of the ball and a lot of her points come off hustle plays and the nitty gritty grind of game.

Butte Central coach Quinn Carter spoke very highly of the character Badovinac brings to the locker room. Saying “we will miss her dearly as a player when her time is up, but what I will miss most is the character of the person she is, but Montana Tech is getting a great player and even better person, and I look forward to her senior year as a Maroon!”

When asked about her decision to join Montana Tech her answer was quite simple, saying “Family, that’s really it the fact I get the chance to play for another four years in front of my hometown and my family means everything to me, and I really believe in Coach Graham and the team he is putting together.”  I am really excited for my senior season; we have a young team and I think Quinn is going to be great for us this season.”

Butte Sports looks forward to covering this terrific athlete and her teams over the next coming years, Tech you got a good one!