Bruce Goddard calls it a ‘Real honor and privilege’

Bruce Goddard is 91 years old and mostly confined to a wheelchair.

The 1948 Butte High graduate can still call a pretty good football game from his armchair, though.

“I coach all the college games,” Goddard said with a laugh when talking about watching games on television. “I’m very interested in the Grizzlies and Bobcats, and how they’re doing each week.”

“How ’bout that Washington win?” Goddard said. “I believe Swede Dahlberg was the captain of the Grizzlies in 1916, the last the Grizzles beat Washington. How about that?”

Since he lives in Palm Springs, California, Goddard does not get to see the Bulldogs play much. He has not been in the Mining City in about nine years.

But Goddard said he still has a soft spot for his old team.

Goddard will be a guest of honor — though only in spirit — of the Bulldogs Friday night when Butte High takes on Kalispell Glacier at 7:30. Butte High will be celebrating Silver B’s night, and Goddard will become just the 15th Diamond B in the history of the storied organization.

“It is a real honor and privilege to be among them,” Goddard said. “I’m am just sorry that I can’t get up there. It’s just not possible right now.”

Becoming a Diamond B means 75 years have gone by since he first lettered in football at Butte High. Goddard first lettered as a junior while playing for Dahlberg, Butte High’s legendary coach, in 1946.

Lindsay became a Diamond B last year, but the festivities were called off because of the COVID-19 pandemic. He, too, will be honored Friday night.

The Silver B’s will hold a dinner at the Elks Lodge before heading down to cheer on the 2021 Bulldogs from the best seats in Naranche. 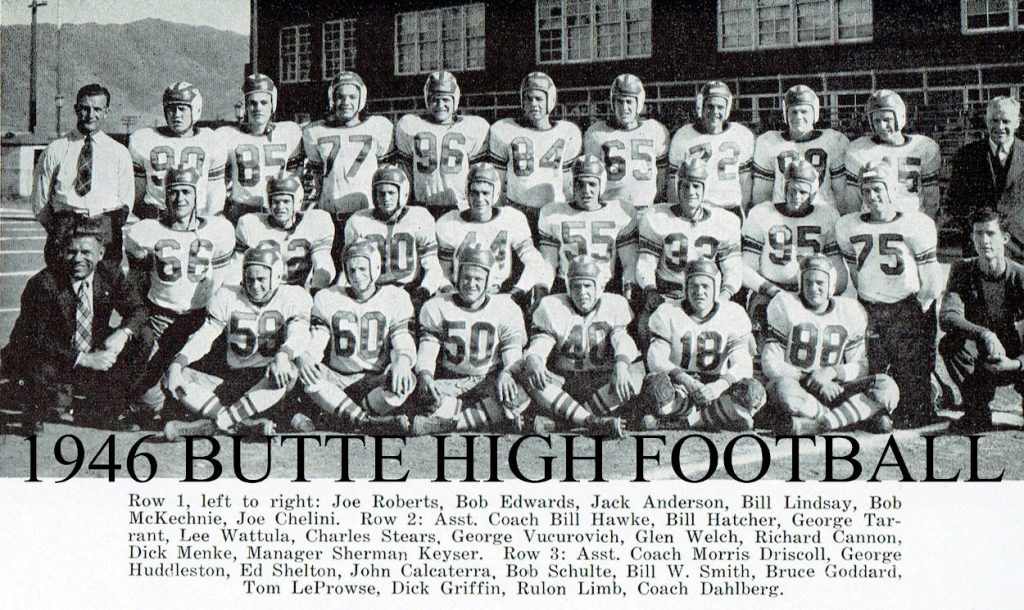 Goddard is the last surviving Bulldog to hear his first varsity letter in 1946, when Butte High went 5-3. He was also part of the 1947 Butte High team that went 8-3 and lost to the Billings Broncs 21-20 in the state championship game in Billings.

Weighing in at 160 pounds — which was eight pounds below the average of the Butte High offensive line according to reports from The Montana Standard — Goddard played tackle for the Bulldogs. He blocked a punt in the state championship game.

“That’s pretty good, isn’t it?” Goddard asked with a laugh.

Unfortunately, so did Jim Orr of Billings. The punt Orr blocked went into the end zone for a Billings safety late in the fourth quarter. It capped a 14-0 Billings run to erase a 20-7 deficit in a game played in front of 6,500 at Public Schools’ Stadium.

“Unfortunately, I remember a lot of things that happened in every game we played,” Goddard said. “I still remember good players that we made and I remember some poor ones that keep awake at night.

“There were certain aspects of the game that we really thought we were robbed on. That’s the way it is, and you’ve got to forget that part.”

While that loss stings all these years later, Goddard takes solace in the fact that he has a winning record against Billings. Butte High beat Billings 13-6 on Oct. 10 of that year in Butte. That win just so happened to come on the eighth Silver B’s Night at Naranche Stadium.

In 1948, Goddard played for in a West in a 20-6 victory in the second Montana East-West Shrine Game. He was one of eight Butte players to play for Dahlberg in that All-Star game.

“He was a real disciplinarian is how they describe it now adays,” Goddard said. “He scouted teams well, and we were usually well prepared between Dahlberg and Bill Hawke, who was also a factor.”

Goddard played basketball at Butte High, too. He went onto the School of Mines, now called Montana Tech, to play basketball and football for one year.

“I attempted,” Goddard said, again with a laugh. “There’s some question about that. Just one year was plenty.”

Goddard left the college with a degree in geological engineering, and joined the Army. He was stationed in Japan and worked on Army intelligence during and after the Korean War.

“We advised on certain targets in Korea,” he said.

Then, Goddard put his degree to work.

“I followed geology in Butte,” he said. “I got transferred by the Anaconda company to Nevada, to British Columbia, back to Nevada. I participated in the development of mines. By this time, it was all gold mining.

“After that I consulted for that for a number of large mining companies until I really retired. I can say I’m really tried as well as retired. I’ve had an interesting life. I may not have made as much money as I would have like, but what the hell.”

Through it all, Goddard had his wife Carole (Ulses) by his side. The couple was married more than 69 years when Carole passed away a year and a half ago.

“She was a twirler in the Butte band and a little cutey,” Goddard said.

Goddard was speaking literally when he said his grandfather, Charles Goddard, “built half of Butte.”

“He was in the construction business,” Goddard said of his grandfather. “He built the First National Bank Building and Butte’s first skyscraper and quite a lot of buildings that are prominent of Butte — the McKinley School, the Emerson School and quite a bit of churches.”

According to newspaper clippings, Charles Goddard, who lived in Butte from 1882 until his death in 1956, also built the Hirbour Block, Silver Bow Club, The Elks Lodge, the Tripp and Dragstedt Apartments, the original Symons Store, the Lizzie Block at Park and Main and the Nissler Junction overpass.

Bruce Goddard grew up at 943 Placer St. with his parents Charles Jr. and Dorothy (Roberts). His father passed away in 1982. His mother followed in 1985.

Today, Goddard said he is doing well, despite the wheelchair, which he jokes about. He will turn 92 next March.

“We should all live this long,” he said.

He recently moved into an assisted living facility, but still spends a lot of time with is daughter Laurel Goddard Thomas and her husband Mathew.

The newest Diamond B was happy to learn that he will be able to listen to Friday’s game on KBOW, where live games are available on kbow550.net or on the KBOW app.

So as the Bulldogs take on the Wolfpack Friday, Goddard will be able to coach from his armchair.