Ariel Beck signs with Invicta, will fight May 7

The updated poster for the April 30 Butte Brawl at the Butte Civic Center does not include a picture of Ariel Beck.

Because of a late development, Beck won’t be fighting in front of the crowd that has long loved the Butte resident and Deer Lodge native. For Beck, not fighting in the Mining City this time around will be bitter-sweet.

“We wanted to do a kicking boxing match just to be in Butte,” Beck said. “But they said no.”

The “they” in this case is the Invicta Fighting Championships, the largest women’s professional mixed martial arts promotion in the world. Beck signed a four-fight contract with Invicta, and her first bout is May 7 in Costa Mesa, California.

Beck, who is 4-2 as a professional, will battle Rachael Ostovich (2-2) at the Hangar at the OC Fair and Events Center. The fights will be shown live on the UFC Fight Pass.

The fight will be the second for Beck since she tapped out in the third round of a bout against Andrea Lee in a Legacy in Louisiana in December.

In that fight, Beck fought off multiple crucifix submissions and arm bar attempts for nearly three rounds. Her head was bent so far toward her chest that it inspired an internet meme. 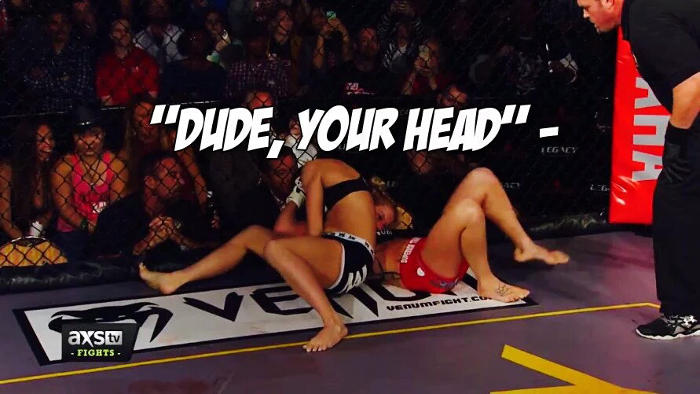 Beck, who won a fight by disqualification last month in Billings, has been working on improving her fighting on the ground since the fight with Lee, who was recently suspended for testing positive for prohibited diuretics.

“We haven’t stopped working on my ground game since then,” Beck said. “We learned a lot from that fight. It was solid stuff to work on. It was solid tape to watch. She’s one of the best in the nation.”

Ostovich, who lost to Lee as well, also specializes in going to the ground. Beck’s strength has always been her boxing, and  Beck said she is hoping her reach advantage — Beck is 5-foot-6 ½, while Ostovich is 5-3 — will help her focus on her strength.

“We just go on the assumption that they’re all going to try to get me on the ground,” Beck said. “I want to stay back and take my shots, and do smart things.”

Beck said she has a lot of respect for Ostovich, who shares another common opponent in the past.

“She’s tough, but she’s beatable,” Beck said. “We’re at that level now where they’re all tough.”

The trip to California will be an expensive fight for Beck, who still has two fights left on her three-fight guaranteed contract with Legacy. Prefight medical tests required to fight in California will drive that price up.

A kick-starter account has been set up so Beck fans can help her cause as she fights to keep her UFC dream alive.

“California has crazy medicals,” Beck said. “It’s about three grand just for medicals to fight there.”

Fans going to the Butte Brawl can also help Beck’s cause. When fans purchase tickets or a VIP table through a fighter at fightforce.com, the fighter gets a commission. So a portion of any ticket bought through Beck online will help pay for her fight in California.

It will also mean that Beck will still be very much a part of the Butte Brawl for the hometown crowd that adores her, even if she is no longer on the poster.