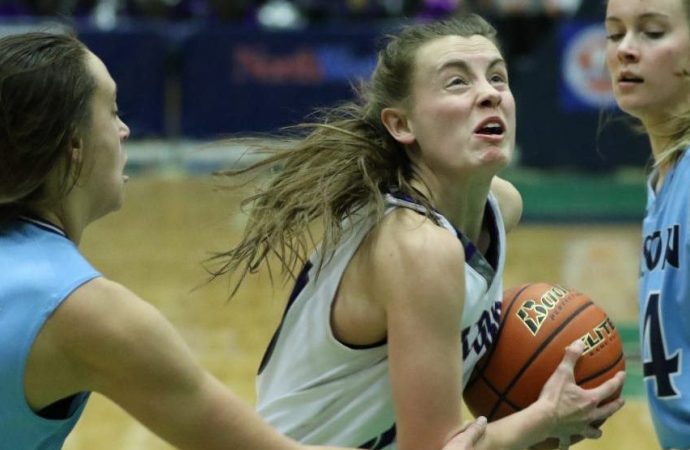 Butte High's Ally Cleverly splits a pair of Bison defenders on her way to the basket during a Class AA State tournametn game March 8, 2019 at the Butte Civic Center. (Butte Sports file photo by Shelly Davis)

Liles of Florence, Rice of Savage also sign with Tech

For about as long as she can remember, Ally Cleverly has gone to the HPER Complex to watch the Montana Tech women’s basketball team play.

She is almost always sitting with her parents, Sean and Shelly.

Even when Cleverly was a redshirt member of the Carroll College women’s team last season, she made several appearances watching the Orediggers.

Now, Cleverly is an Oredigger.

She made the decision to transfer to Tech to play for coach Carly Sanon and her hometown school in June. Sanon announced the signing of Cleverly and two others Friday afternoon.

Sanon also announced the addition of McKenna Liles of Florence and Soda Rice of Savage.

“I am very excited about our 2020 recruiting class,” the coach said in a statement. “The new recruits fit well academically and athletically to Montana Tech.”

Because of transfer rules, Cleverly will have to sit out this 2020-21 season — if there is one — and lose a year of eligibility. She’ll be able to play as a sophomore during the 2021-22 campaign.

Cleverly transferred to Carroll after playing two sports for the Saints as a freshman. After earning MVP honors of the Shodair Soccer Classic las summer, Cleverly appeared in 13 soccer games for the Saints.

She said her move home was not a reflection on Carroll.

“I really loved Carroll and I really liked my coaches and teammates there,” Cleverly said. “I just kind of struggled personally with anxiety. It took a toll on me mentally and physically. When I came home and got to study at home (after the coronavirus shut down classes), the anxiety went away.”

Cleverly will go down as one of the all-time great Butte High Bulldogs. She became just the third Butte High athlete — after Anna Fabatz and Natalee Faupel — to earn 12 varsity letters at the school. Haley Herron and Tommy Mellott became the fourth and fifth this past school year.

With the Bulldogs, Cleverly lettered four times in soccer, basketball and track.

“Ally is a great addition to our program,” Sanon said. “She is natural fit both academically and athletically. Ally is a great decision maker, shooter, and has the ability to score at the rim.”

Cleverly was a two-time All-State selection in soccer, and she said no longer playing that sport will be an adjustment.

“I played Soccer my whole life pretty much,” Cleverly said. “It’s definitely going to be strange.”

The NAIA moved the soccer season to the spring because of the pandemic.

“Once I start to see them start up and start again in the spring, I will start to miss it,” Cleverly said.

Cleverly started at guard in 84 out of a possible 85 games in her for years on the Butte High girls’ basketball team. The only game she missed came when she was sick early in her sophomore season.

“I still kind of wish I would have played it,” Cleverly said with a laugh. “But there’s nothing you can do now.”

She scored 892 points, averaging 10.6 points per game on her career. She also grabbed 224 rebounds, handed out 186 assists and drained 129 3-point shots for the Bulldogs.

“I’m glad to be on that list,” said Cleverly, who had no idea she ranked that high in Bulldog games played. “There’s a lot of really good players on that list.”

As a senior, Cleverly averaged 14.6 points per game to help lead the Bulldogs to their first Class AA State tournament in six seasons. Her scoring average was the third best in the Class AA.

Cleverly, who was an Academic All-State player all four years at Butte High, will major in biology at Montana Tech. She said she is not sure whether or not she will eventually pursue a career teaching biology and coaching basketball or go into medicine.

For now, she is enjoying playing working out with the Orediggers and living in the Mining City.

“I really like doing workouts with the team and having the coaches there and stuff,” she said.

Liles, a 5-10 forward, averaged 11 points and 10 rebounds over the course of her career for the Falcons. She was a first-team All-State selection her senior season.

“Makenna is a hard worker and brings size to the guard position,” Sanon said. “I am excited to have her part of our program.”

Rice, a 5-11 forward, transfers to Montana Tech from Minot State University. She was a multi-sport athlete for the Warriors playing basketball, volleyball, and running track. Rice was a three-time All-State selection and scored 1,139 points at Savage High School.

“We are excited to welcome Soda to the Digger family,” Sanon said. “Soda adds length and athleticism to our team. Soda had a great high school career at Savage and has spent the last year working on her strength.”