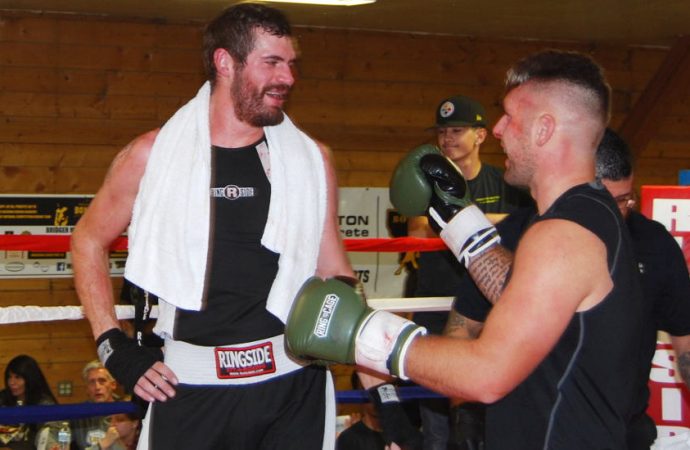 Adam Axelson, left, and Levi Caprara congratulate each other after Saturday’s fight in Bozeman. (Courtesy photo)

BOZEMAN — Butte native Adam “The Axe” Axelson returned to the ring on Saturday evening at the “Bridger Mountain Beat Down” held at The Fairgrounds.

The event raised funds to support the youth of The Bozeman Boxing Academy, which was founded by coaches Levi Johnson and Nick Rangel. In addition to bouts that drew boxers from clubs around the area, several matches featured “The Battle of the Coaches” as coaches from various boxing programs squared off.

Axelson won a unanimous decision over Levi Caprara, who boxed for many years for the H-Town Boxing Club in Helena. Both Caprara and Axelson now volunteer their time as coaches for Bozeman Boxing Academy. Before their bout, both coaches were presented with Certificates of Appreciation for their work and dedication in coaching and mentoring the young boxers of the academy.

Coach Johnson lost a very close fight to Wes Ogan but he gave it his all for the kids. Coach Rangel prevailed in his fight with Kyle Segmiller.

Axelson has participated in combat sports since his sophomore year at Butte Central. A former Montana and Regional Golden Glove Champion as a light heavyweight, he was twice selected to participate at The Nationals held at The U.S. Olympic Training Center in Colorado Springs, Colorado. He is undefeated while fighting in kickboxing and mixed martial arts formats and also has an unblemished record as a professional boxer. He has never been knocked down in the ring.

Axelson is a technician in tissue donation processing and lives in Belgrade with his wife, Lynae and six year old son, Brayden.